Like most Canadian theatres, Paradise Cinemas in British Columbia is currently closed. But as the Williams Lake Tribune reports, Cariboo Art Beat have released photos from their new mural, created by Tiffany Jorgensen and Sarah Sigurdson, which will greet moviegoers when it reopens. As you can see, Marilyn is placed here with Clint Eastwood (in his ‘Man With No Name’ guise), Indiana Jones, and a Minion from Despicable Me. She’s depicted in the apparel of Marvel Comics heroine Wonder Woman, holding a crown like she did in a 1953 publicity shot by John Florea (wearing a Travilla gown from How to Marry a Millionaire.)

Fans have posted their latest Monroe sightings on the Marilyn Remembered Facebook group. Firstly, ChadMichael Christian Morrissette found this mural (based on Alfred Eisenstadt’s famous 1953 photo of Marilyn) on Highland in Hollywood.

And secondly, Lorenzo Presti spotted Marilyn gracing the cover of the ironically-titled Marilyn Had Eleven Fingers On Her Feet, a book of Hollywood-themed paintings by artist Maria Herreros on sale in Madrid. This portrait was inspired by Milton Greene’s 1953 Laurel canyon series. And of course, Marilyn had no extra fingers, or toes – this rumour was debunked by Snopes.

Incidentally, another of Maria’s portraits – based on another shot of Marilyn by Eisenstadt – is featured on the cover of Autobiografía de Marilyn Monroe, a novel by Rafael Reig. 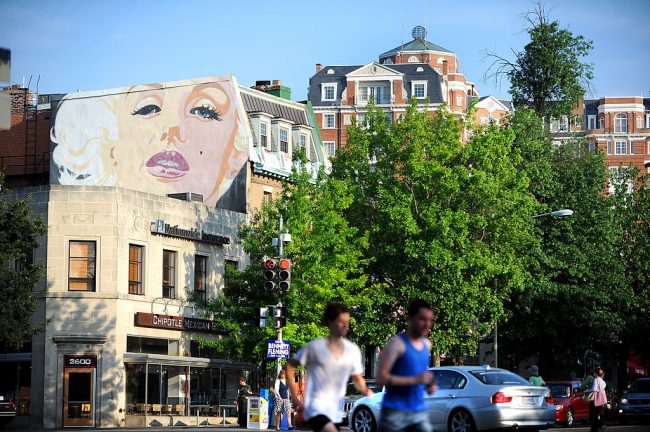 This Marilyn mural, in the Woodley Park district of Washington D.C., was commissioned almost 40 years ago by a local hairdresser. Roi Barnard, former owner of Salon Roi (and author of a new memoir) has shared the story behind this much-loved local landmark with the Washington Post.

“What do you see when you look at Marilyn Monroe gazing down at the corner of Connecticut and Calvert streets NW? A beautiful woman? A movie star? An icon?

‘When I saw Marilyn for the first time on screen, I just went, Whoa, you’re not happy either,’ said Roi, the District hairdresser who helped commission the famed mural in 1981. ‘And I saw it in her eyes.’

‘My love affair with Marilyn started when I was 12,’ said Roi as he gently, but firmly, tilted my head to the left. ‘Her star was just beginning to rise. I forget which movie I saw first, but I saw her, and I saw in her eyes, my eyes. We had sad eyes. No matter how happy she was, I knew she was sad. And I related to that.’

‘I was a sissy little boy,’ Roi said. That was not an easy thing to be where he grew up: in tiny Poplar Branch, N.C., a place of dirt roads and outhouses … Roi came out of the closet in the 1960s, determined to be honest about his sexuality. He became a model, changing his name from ‘Roy’ to the more memorable ‘Roi.’ He learned to cut hair and worked as a hairdresser at the Washington Hilton. In 1969, he and Charles Stinson — his business partner and onetime romantic partner — opened a salon together.

In 1981, Charles commissioned artist John Bailey to paint the Marilyn mural. It’s become a landmark, even if most passersby don’t know how personal the image is to Roi.

‘She carried me through a very troubling part of my life,’ Roi said. ‘I would just go see her movies or read about her. I connected with her.’ Putting Marilyn on the wall wasn’t advertising, Roi said. It was homage.” 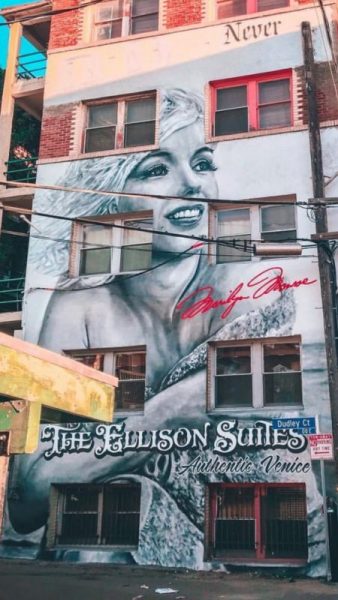 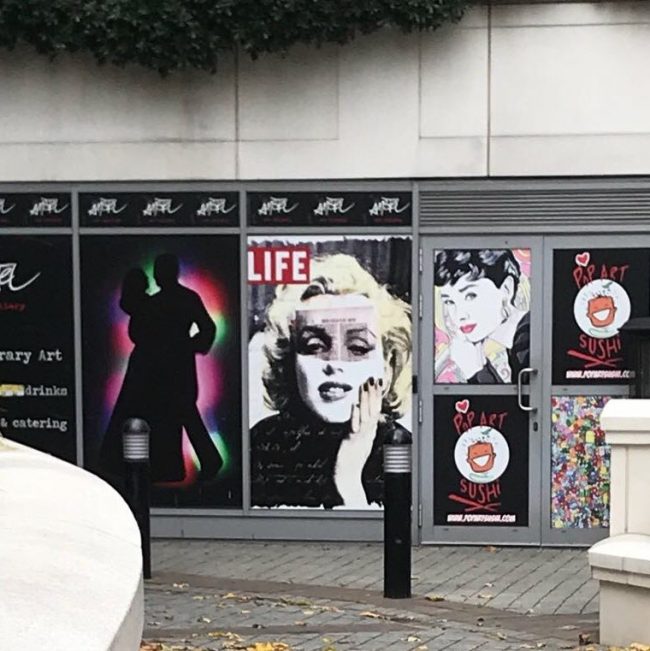 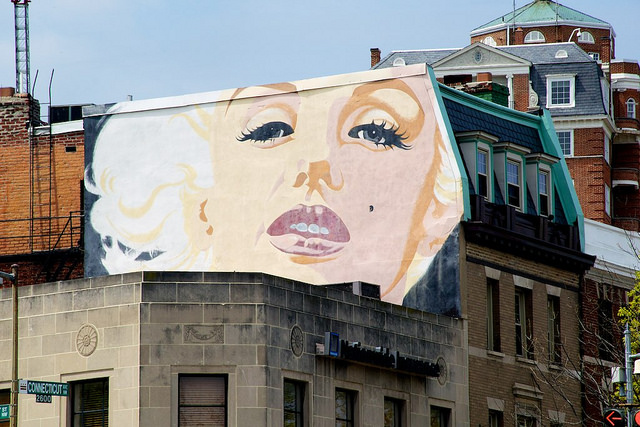 One of the best-known, and long-lived Marilyn murals – now 37 years old – is profiled on DC Curbed.

“On the upper outside wall of Salon Roi, passersby can find a massive mural of pop culture icon Marilyn Monroe. The work was completed in 1981 by John Bailey. It was later restored in 2001 after the artwork faded over the years. New lights were also installed. In 2014, Washington City Paper’s Reader’s Poll named this piece one of the the best murals in the city.”

“Proof that our sweet Marilyn is EVERYWHERE….My dear friend Sheila was visiting her brother recently in a small town called, Chetwynd (northern part of our British Columbia), when upon a walk with her friend, spotted this mural painted on a building. Her friend surprisingly had no idea who the subject was (*shocker*), but Sheila sure did…and told her that she knows someone (me), that he was a huge fan/collector, and would love this! I sure do! Sheila believes that it was painted a good number of years ago, as it has been weathering with time and the elements. Sheila says there are many other murals of other subjects painted on buildings there, to deter tagging and grafitti…WORKS, as no one has dared to ruin another artist’s work. Of course if someone defaced this, they’d have to answer to me and a whole army of Marilyn fans! Anyway, I love this mural, inspired by a 1953 photo session, that Marilyn had with photographer Milton H. Greene…Her first with him, for LOOK magazine…and a collaboration that would go from 1953-1957…Sessions that would go on to become some of the most beautiful photos taken of Marilyn, ever!”

FranCisco Vargas, the artist who painted a mural of Marilyn in downtown Fresno, California, has died aged 64, the Fresno Bee reports. He had suffered a stroke after being diagnosed with cancer in July. The mural, first painted in 1992, stands on the Weco Welding Supply building on Ventura Street near Eighth. In 2012, Vargas changed the cigarette held by Marilyn (after a 1953 portrait by Frank Powolny) to a paintbrush. Last year, he completed a ‘postage stamp mural’, celebrating Fresno’s icons.

Public art featuring Marilyn always seems to cause a stir. Just two weeks ago, a mural by Paul Archer, depicting Marilyn between the sheets (inspired by an iconic photo session with Andre de Dienes), was stolen from the wall outside Floyd’s Diner in downtown Victoria, in British Columbia, Canada. But as the Times Colonist reports today, the mural has now been found in a nearby alleyway, with only minor damage.