As a Monroe fan, one of my greatest pleasures is taking the opportunity to see her movies on the big screen. But after the recent acquisition of Twentieth Century Fox by Disney (see here), a growing number of theatre owners are worried that Marilyn’s films and other studio classics may soon be out of bounds, as Ryan Faughnder reports for the Los Angeles Times.

“Fox, and the movies in its storied library of motion pictures, is now part of Walt Disney Co., which has long placed tight restrictions on when and how cinemas can screen its older titles. Disney’s long-standing policy is to not allow first-run theaters or commercial discount cinemas to screen movies from its library … That policy now will apply to Fox’s vast catalog, according to exhibition sources who were not authorized to comment …

Repertory theaters — those that specialize in screenings of old titles — will still have normal access to Fox movies, sources said … But the Disney policy is nonetheless expected to make things more difficult for independent theaters, and has already caused uncertainty among art houses. Some said that they haven’t been given clear guidance on the rules and are left to make requests on a case-by-case basis.”

“Hollywood endured a big setback this month, and it had nothing to do with the Oscars. A major studio, 20th Century Fox, officially disappeared into the mist, instantly transforming a once robustly competitive industry into a Disney oligopoly. The ultimate cost in jobs could range as high as 10,000, but the real cost will be in opportunity and competitive zeal.

Fox’s history, like MGM’s, has wallowed in melodramatic triumphs and scandals –the corporate intrigues of Warner Bros and its corporate parents (AT&T) or Universal (now a child of Comcast) seem pedestrian compared with Fox’s operatic struggles: Marilyn Monroe’s mysterious demise in the middle of Something’s Got to Give; Elizabeth Taylor’s over-the-top theatrics in Cleopatra; Darryl F. Zanuck’s eight-hour stockholder speeches and stormy battles with his son and successor, Richard (fired in 1971); the eleventh-hour brink-of-disaster deal for Star Wars; the fierce tug of war over Titanic and its overages [overspend].

Given its history, it’s fitting that this is the only studio immortalized in a rock ‘n’ roll classic (‘Twentieth Century Fox’), performed with drugged-out vigor by Jim Morrison and The Doors.

Even Fox’s beginnings are cloudy: It may, or may not, date back to 1915 with the birth of Fox films, but also to 1935 when the mysterious Spyros Skouras orchestrated the first of several mergers. Darryl Zanuck, who felt he was a bigger star than his actors, gave sizzle to the studio with signings of Tyrone Power, Henry Fonda, Alice Faye and Betty Grable but also gave it gravitas with such well-intentioned movies as Gentleman’s Agreement, The Razor’s Edge and Wilson. Production of The Longest Day in 1962 was the ultimate Zanuck epic — a long, lugubrious account of the D-Day Invasion with just about every star in the world popping up in bit roles (John Wayne and Kirk Douglas among them).

True to studio tradition, it remains unclear how much of the Fox identity may emerge following Disney’s $71.3 billion seizure … If Fox filmmakers feel angst, it is understandable. Disney accounted for 26% of the box office last year and that could rise to 40% this year … Darryl Zanuck is no longer around to bark, and no one seems to be mounting a new Cleopatra, but somewhere on the emptying Fox lot fragments of history still reside.” 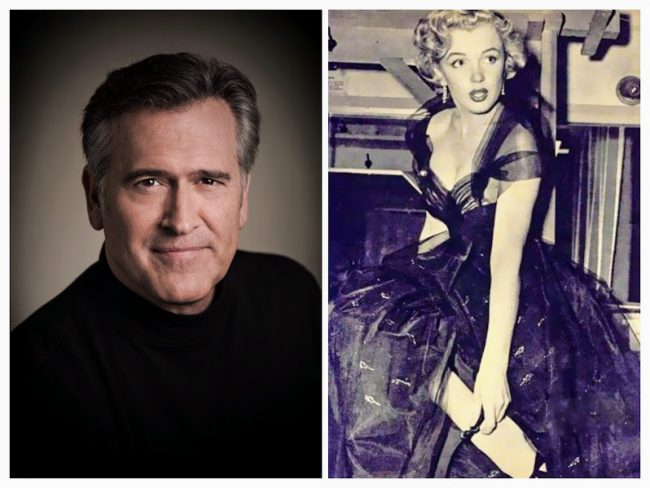 Marilyn was (infamously) never nominated for an Oscar, and only attended the ceremony once, to present an award for All About Eve in 1951. However, in an interview for Hollywood Life, actor Bruce Campbell – who made his name in the cult 1981 horror film, The Evil Dead – reveals a family memory that may provide another tenuous link to Oscar.

“Show me a successful person, and I’ll show you someone whose life is falling apart. It really is — it’s so true of so many people. Show business — show me a really successful actor, like really successful, and I bet their personal life is for sh*t.

I heard one time — Marilyn Monroe. No one would ask her out, because they always assumed she was with somebody. And an uncle of mine was an animator for Disney, years back in the Fifties, and they said, ‘hey, Marilyn Monroe’s looking for a date to the Academy Awards. Do you want to do?’ He’s like, ‘bullsh*t. She’s not looking for anything.’ And she didn’t go that year, because she didn’t have anyone to go with. Ain’t that weird?

Last December, it was reported (here) that Disney had bought Twentieth Century Fox’s assets from its most recent owner, Rupert Murdoch. And on July 27, as Variety reports, the Fox-Disney merger went ahead with a $71.3 billion buyout. Marilyn’s films for her home studio will be included in the purchase. As many commentators wonder what this will mean for the venerable Fox brand, the Hollywood Reporter looks back on its colourful past with a series of articles including the fraught relationship between longtime studio head Darryl F. Zanuck and the biggest star of all – Marilyn – during 1951-62, a period described as the ‘Monroe Years’ (preceded by ‘Eve’s Gold Rush’ in 1950, a reference to the Oscar-laden All About Eve in which Marilyn had a small part.) Firstly, film historian Leonard Maltin offers a eulogy for Fox, and the personalities who made it great.

“Zanuck always had someone waiting in reserve in case one of his stars became uncooperative. Betty Grable was hired as a threat to musical star Alice Faye and soon surpassed her as Fox’s premier attraction (and No. 1 pinup) of the 1940s. Faye grew tired of Zanuck’s belittling behavior and walked off the lot one day without saying goodbye. (Zanuck wouldn’t have survived in the #MeToo or Time’s Up era. He was notorious for taking advantage of starlets.)

Zanuck reigned until 1956, when he resigned from Fox and moved to France to become an independent producer. In the fractious years that followed, the studio wooed him back for projects more than once, even allowing him to cast his mistresses (Bella Darvi, Juliette Greco, et. al) in leading roles. But while movie attendance soared during the years following World War II, it sank nearly as quickly with the introduction of television. Fox’s response was to unveil a widescreen process called CinemaScope and its aural equivalent, stereophonic sound. Films like the biblical epic The Robe drew people back to theaters. So did Fox’s newest star, blonde bombshell Marilyn Monroe.

It was believed the wildly expensive epic Cleopatra — which paid Elizabeth Taylor an eye-popping $1 million salary — nearly bankrupted 20th Century Fox, but president Spyros Skouras already was selling off the company’s valuable backlot (now known as Century City) before the movie’s budget ballooned to $44 million. Facts aside, Cleopatra became a scapegoat for all of the studio’s ills.

In a final coup, Darryl F. Zanuck returned to Fox in the early 1960s and named his son, Richard Zanuck, president … Then, in 1970, Zanuck Sr. fired his son and sparked an Oedipal family feud that sucked in Zanuck’s ex-wife — Richard’s mother, a major shareholder — and ended with the elder Zanuck being pushed out of the studio he co-founded. Repeated changes of regime and ownership in the ensuing years took their toll on the company that had once put its distinctive imprint on such classics as Laura, Miracle on 34th Street, Twelve O’Clock High and All About Eve.”

In another article, ‘Life in the Foxhole‘, Mitzi Gaynor describes the working atmosphere at Fox as ‘like a family’, while Don Murray recalls his movie debut at the studio, and his mercurial leading lady…

“Zanuck loathes Marilyn Monroe (‘He thought I was a freak,’ Monroe once said) and nearly tears up her first contract after her nude Playboy cover comes out. But by 1953, Monroe has three of the studio’s biggest hits — Niagara, Gentlemen Prefer Blondes and How to Marry a Millionaire — and rene­gotiates a new contract paying $100,000 a picture and giving her creative approval. Her first film under the new deal is 1956’s Bus Stop, co-starring Don Murray. ‘I’d never done a feature before,’ says the actor, now 88, ‘so I didn’t know what to expect. From what others on the set told me, Marilyn was on her best behavior. She’d just been to the Actors Studio, and she really wanted to concentrate on her acting. But even so, she was late every day. She’d get to the studio on time, but then she’d spend hours dawdl­ing in her trailer, getting the nerve up to act. She was trying hard — she would sometimes do 30 takes in a scene — but she was very anxious about her acting. She would actually break out in a rash before the cameras would start filming. The cameras gave her a rash.'”

Finally, you can read Marilyn’s take on Fox, and Zanuck – as told to biographer Maurice Zolotow – here.