Marilyn’s estate has threatened legal action over plans by Digicon Media to stage a concert using holograms of Monroe alongside live entertainers, according to the Hollywood Reporter.

“Digicon Media holds a copyright on “Virtual Marilyn” and plans to feature the projected blond bombshell singing and interacting alongside live music stars. But months of correspondence obtained by The Hollywood Reporter indicates that the Monroe estate is closely watching Digicon’s activities, and if the show goes on, there could be a big lawsuit.”

A statement from ABG, who represent licensing rights for Marilyn’s estate:

“The Estate is unfamiliar with Digicon Media’s capabilities as a developer and producer of digital and holographic technology, and is unaware of any successful attempt by Digicon to organize any meaningful exploitation of the crudely animated character that it claims to be a representation of Ms. Monroe and which it allegedly created in the mid-1990s.  The Estate and Authentic Brands believe that the technological advancements made since that decade allow talented developers to create superior virtual characters, akin to the virtual Marilyn Monroe character portrayed in Dior’s popular ad campaign for its J’Adore perfume.

The Estate’s cooperation is required if anyone intends to market and exploit Ms. Monroe’s identity and persona through a ‘live’ concert or otherwise, and Digicon has not secured any such cooperation from the Estate to date.'” 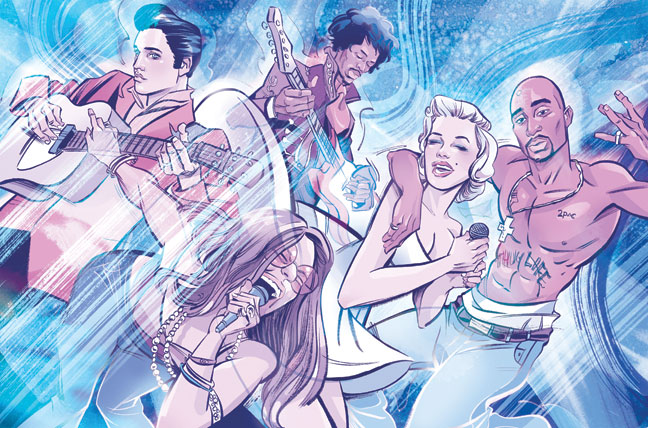 Following the controversial recent ‘hologram’ Tupac Shakur show, Digicon Media are planning a similar event featuring Marilyn – but her estate have not yet granted permission, according to the Hollywood Reporter. (Personally, I hope it doesn’t happen – I’m far more interested in the true MM than any cyber approximation.)

“The Hollywood Reporter has learned that a ‘live’ Marilyn Monroe concert is being planned to take place before year’s end with the working title Virtual Marilyn Live — A Musical Celebration of the Birth of the Pop Icon. The concert, which has yet to secure a venue (organizers also plan to stream it on the web), will feature the projected blond bombshell singing and interacting alongside live music stars. Becky Altringer, managing director and co-founder of Digicon Media, the company doing the planning, says the event will employ the technology used at Coachella to launch virtual Marilyn’s new career as ‘a performer, spokesperson, cultural pundit and computer avatar.’

The potential new revenue stream from live holograms could boost an already lucrative business for the estates of some of the most iconic dead celebrities. Jackson raked in $170 million in 2011, according to Forbes. Presley took home $55 million. Monroe, despite having died of an apparent drug overdose nearly 50 years ago, didn’t do badly at all with $27 million. ‘I would say there could be an uptick [in revenue],’ says Mark Roesler, head of CMG Worldwide, an Indiana-based agency representing the estates of stars including Andy Kaufman and Natalie Wood. ‘Whether that is 10 or 30 or 40 percent is hard to tell, but it will be an uptick.’

Despite the enthusiasm, however, it’s far from settled what rights are needed to pull off hologram spectacles.

To adapt a performance from an existing video work, all that is typically required is a copyright on the video. But, potentially, more rights are needed for hologram performances: In many states, including California, celebrities also hold valuable ‘rights of publicity,’ which allow them to protect their images, voices and likenesses from exploitation without consent.

Has a movie star who signed a broad contract given up rights to stop a hologram? Actors and musicians usually allow studios and record labels to use their images to promote a film or album forever. Reality TV stars hand over to producers pretty much all of their rights for a chance to become famous. Some lawyers therefore believe that most existing contracts give studios the rights to create holograms if the technology merely modifies a work covered by a contract. And there are exceptions to publicity rights. They often don’t cover celebrities (like Monroe) who didn’t live in a state with such protections at the time of their death. The law also allows ‘fair use’ for new works that are ‘transformative,’ meaning they use a small amount of a celebrity’s image as part of a larger spectacle.

The coming Monroe concert could signal the type of legal fights to come.

Digicon, which says it has been developing avatars and ‘synthespians’ since 1995, is not working with the Monroe estate, as Coachella producers did with Shakur’s family. The company owns certain copyrights pertaining to Monroe, including a recent grant on her computer-generated persona, and Altringer says that might be enough. ‘We will probably end up cooperating with them, but only when they come to us,’ she explains. ‘We aren’t in a rush to deal with them because they [own] only marketing rights to old photos for merchandise. We will have our own rights for the living virtual Marilyn, who is the pop icon today.’

A rep for Monroe’s estate couldn’t be reached for comment, but it has brought several lawsuits against those who have used her image without permission. Jonathan Faber, chief executive of Luminary Group, has managed deceased celebrity estates including those of Ella Fitzgerald, Ruth and, formerly, Monroe. He says he’s unsure how courts would interpret the issue but adds he wouldn’t ‘hesitate to bring a case’ against someone who used one of his client’s images to create a touring hologram.”