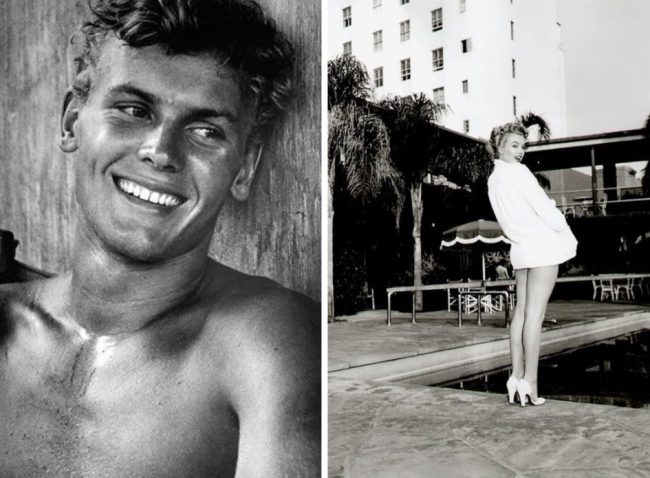 Actor Tab Hunter, one of the great Hollywood heartthrobs of the 1950s, has died aged 86. Born Arthur Andrew Kelm in New York, he moved to California with his mother as a child, and lied about his age to join the U.S. Coast Guard at fifteen. He began acting in 1950, winning his breakthrough role in wartime drama Battle Cry five years later. Rumours of his homosexuality were first reported in Confidential magazine, but didn’t dent his burgeoning career as a teen idol. Over the next four years he was Warner Brothers’ most popular male star, with roles in Damn Yankees (1958), and They Came to Cordura (1959.) He also enjoyed a No. 1 hit single with ‘Young Love’ in 1957, and was given his own TV show.

From the 1960s onward Hunter also acted onstage, and starred in spaghetti westerns before returning to Hollywood in The Life and Times of Judge Roy Bean (1972.) He later became a favorite of independent filmmaker John Waters, and made two films with legendary drag queen Divine. In his 2005 memoir, Tab Hunter Confidential, he spoke openly about the challenges he faced as a gay actor under the Hollywood studio system. The book inspired a documentary of the same name, and a biopic is currently in development.

Just five years younger than Marilyn, Tab Hunter was also judged by his striking good looks during his early career and had to struggle to prove his talent ( a 2016 article on The Wow Report website even describes him as ‘the male Marilyn Monroe’.) In  2011, Tab spoke to Monroe expert Scott Fortner about (among other things) an encounter with Hollywood’s other favourite blonde, as recalled on the MM Collection Blog:

“I of course asked Mr. Hunter if he’d ever met Marilyn Monroe, and their paths did cross in the early 1950s at the Beverly Hills Hotel. Both were there for a Hollywood event, and upon meeting, Mr. Hunter told Marilyn, ‘I loved you in Clash By Night. No one wears a pair of Levis like you,’ to which Marilyn replied, (spoken in Mr. Hunter’s best Marilyn impersonation) ‘Thank you, Tab.'”