Seward Johnson’s giant sculpture, Forever Marilyn, is coming to Latham Park in Stamford, Connecticut this summer, as part of an outdoor art exhibition, Seward Johnson: Timeless, as Annette Einhorn reports for Hamlet Hub. You can read more about the exhibit and other events (including a screening of The Seven Year Itch at the Avon Film Centre on June 7) here.

“The installation will begin on Monday, June 4 when a crane will lift the 26-foot, 30,000 pound Marilyn, in various parts, high into the air before she is assembled in place in Latham Park in Stamford Downtown. The opportunity to capture photos of the flying sculpture parts; legs, torso, skirt, will be from 10:30am to 2pm.

The monumental Forever Marilyn, sponsored by Avon Theatre Film Center, from the Icons Revisited Collection, is just one of 36 sculptures that will be on display in Stamford Downtown. 35 life-size, realistic sculptures from Seward Johnson’s Celebrating the Familiar series will also be on display as part of UC Funds presents Timeless – The Works of Seward Johnson for the Summer of 2018. Installation of the life-size works begins May 30.

The exhibition will kick off with an opening night celebration on Wednesday, June 6, hosted by Stamford Downtown. The event will be held at the Palace Theatre at 61 Atlantic Street from 5:30 to 8:00 p.m. Trolley tours are set to run throughout the evening, offering guests a chance to view many of the sculptures.”

In addition to Up Close With Marilyn, the Milton Greene exhibition now at London’s Proud Central, another exhibition featuring various photographers, Marilyn Monroe: Timeless, will open at Moyse’s Hall Museum in Bury St. Edmund’s, Suffolk, on June 2 through to September 30. More details to follow…

Permission to open ‘The Marilyn’, a new speakeasy-style cocktail on Monroe Street, NYC, has been denied, Bowery Boogie reports. Monroe Street is in the Two Bridges district of Manhattan. While in theory it sounds like perfect branding, it seems the developers failed to address residents’ concerns.

Two Bridges is located near the footings of the Manhattan Bridge and Brooklyn Bridge, the subject of a touching 1955 poem by Marilyn… 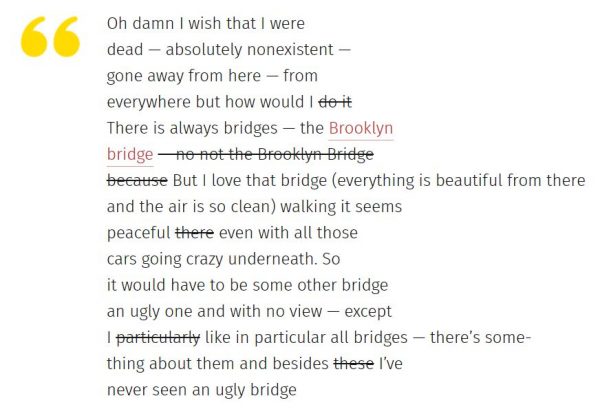 Yesterday brought the sad news that Canadian-born actress Margot Kidder has passed away aged 69. Many children of the 1970s (myself included) will remember her as Lois Lane in the Superman movies. But did you know she also played Cherie in a 1982 television remake of Bus Stop? Filmed for HBO at the Claremont Theatre in California, it was a more literal adaptation of William Inge’s play, featuring additional characters not seen in Marilyn’s 1956 movie. If you’re curious about Margot’s performance, watch this Youtube clip from 6:20 onwards – and a full copy can be purchased for $23 from DVD Cafe. 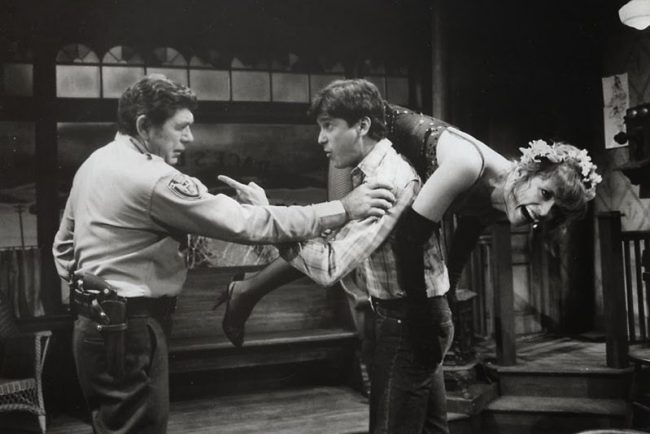 Double Marilyn (or Two Marilyns), originally a gift from Andy Warhol to his late brother, is to be sold as part of the 20th Century & Contemporary Art Evening Sale this Thursday (May 17) at the Phillips auction house on Park Avenue, NYC, with an estimate of $3-4 million, as Marylynne Pitz reports for the Pittsburgh Post-Gazette.

Until last fall, ‘Double Marilyn’ and 10 early Warhol artworks owned by the Warhola family hung at The Andy Warhol Museum on the North Side. James Warhola, who lives in Long Island City in the New York borough of Queens, took them back after he was unable to arrange a sale or trade with museum director Patrick Moore.

‘My dad was the oldest brother,’ said James Warhola, a 63-year-old artist. ‘He saved the early works when my uncle left for New York. They have been in the family ever since as well as the “Double Marilyn” silkscreen. That was part of our household for close to 60 years.’

He said The Andy Warhol Museum ‘would have loved for us to have donated the collection’ but that was not possible.

‘My uncle’s estate went to a foundation. We didn’t get anything from the foundation. We’re not the Rockefellers. It was my dad’s main asset,’ Mr. Warhola said.

Pre-sale estimates are not always indicators of a painting’s actual auction price. Warhol’s works often sell for more than the pre-sale estimate. A 1962 ‘White Marilyn’ silkscreen by Warhol was estimated to sell for $12 million to $18 million in 2014. It fetched slightly more than $41 million at a Christie’s auction on May 13, 2014.

In this case, Phillips auction house has a third-party guarantee on ‘Double Marilyn.’ This means that one bidder has guaranteed a price of $3 million for the painting if no one bids higher.”

UPDATE: ‘Double Marilyn’ has been sold at Phillips for $3.6 million, as reported in an editorial for the Post-Gazette. 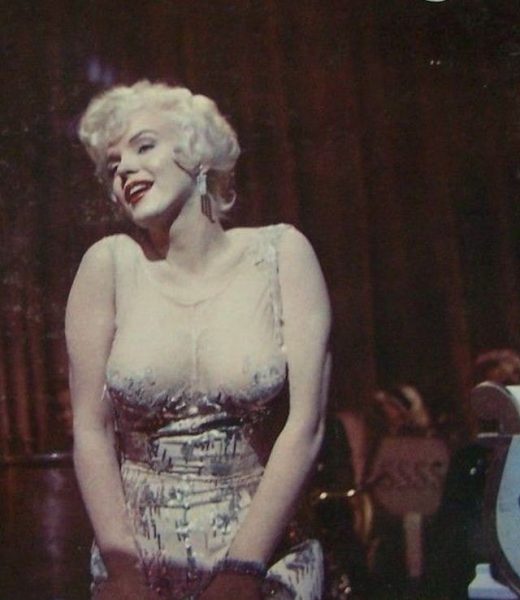 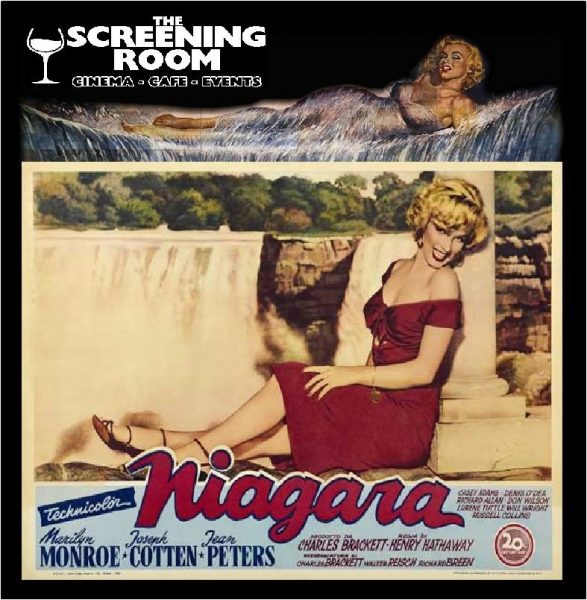 Recently seen in Palo Alto, Niagara moves back east with three showings (May 12 and 15 at 7:30, and May 16 at midday) at the Screening Room cinema and cafe in the Boulevard Mall in Amherst, Upstate New York.

British fans can expect lots of media coverage for Marilyn this month. In this week’s issue of free magazine Stylist, Rhiannon Lucy Coslett interviews gallery director Amy Thornett about Up Close With Marilyn, the exhibition of Milton Greene photos at London’s Proud Central  until June 24. You can read it here, or buy a copy (N415) for just £1 from Newsstand (shipping costs may vary outside the UK.) 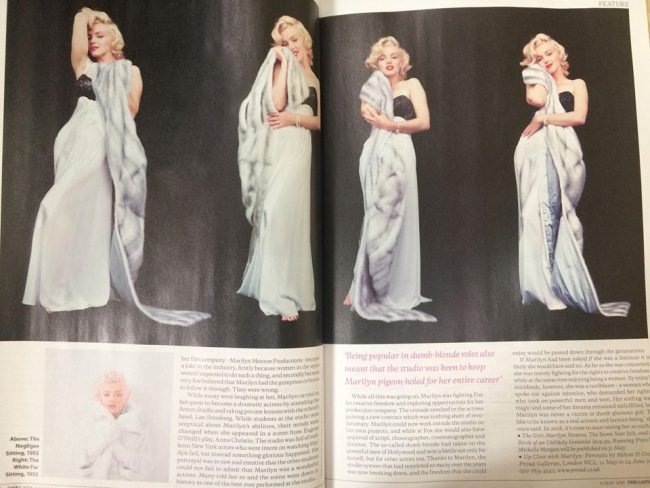 And in the latest issue of The Lady (dated May 11), ‘Marilyn Monroe: An Unlikely Feminist’, a four-page article by Michelle Morgan, author of The Girl (just published in the US, and coming to our shores very soon), is accompanied by more Greene photos. 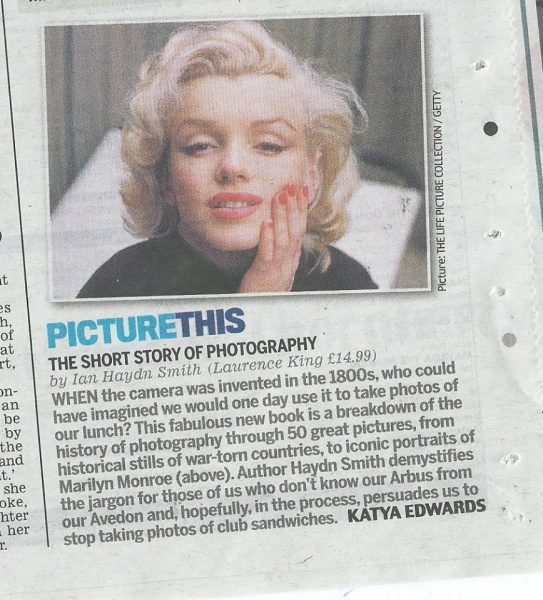 Finally, Alfred Eisenstadt’s 1953 portrait of Marilyn is featured in today’s Daily Mail, in a review of a new book by Ian Haydn Smith, The Short Story of Photography.

Thanks to Fraser, Valerie and Nicola at Marilyn Remembered 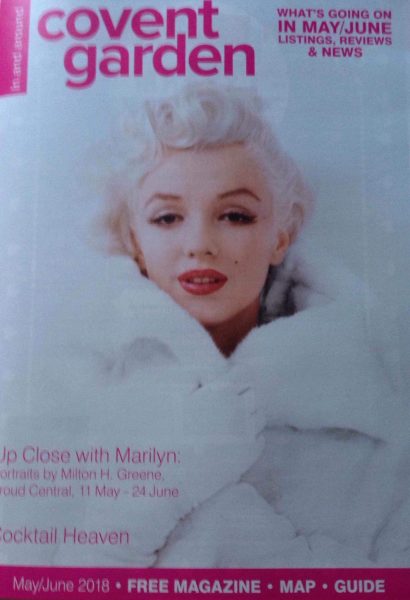 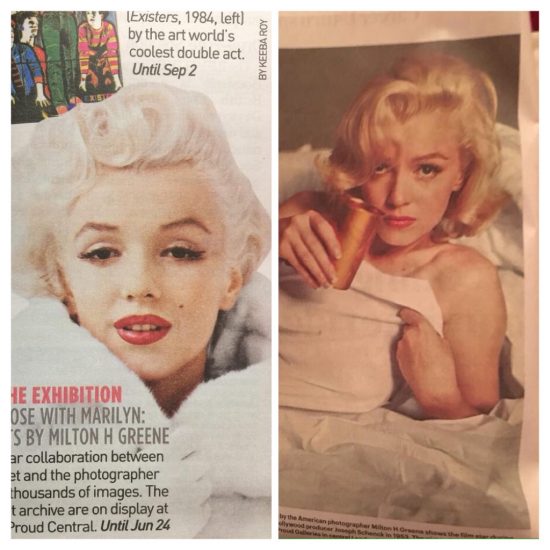 Always At The Carlyle, a new documentary about one of New York City’s legendary hotels, puts paid to the enduring myth that Marilyn and John F. Kennedy enjoyed a romantic tryst in the Presidential Suite after the 1962 gala where she sang ‘Happy Birthday’ to him.  ‘Much is made of a story about how John F. Kennedy smuggled Marilyn Monroe through a tunnel to the Carlyle,’ the Times reports, ‘but then the idea is pretty convincingly debunked.’ In fact, at the end of the evening Marilyn accompanied her elderly former father-in-law Isadore Miller – who was her escort at the gala and after-party – back to his hotel, before returning home alone. This was confirmed by superfan James Haspiel, who clocked Marilyn entering her apartment building in the small hours.