Over at VibeVixen, an interesting post asks, ‘Why Are Female Rappers Choosing Marilyn Monroe Over Lena Horne?’ Given the recent tributes to MM from Brianna and Nicki Minaj, it’s a fair question – when R&B is (mostly) an African-American field, why are black icons overlooked in Marilyn’s favour?

I have often regretted that other icons are being forgotten, but this is not Marilyn’s fault. And it’s not just a racial issue either – even Elizabeth Taylor noted that Monroe was more ‘mythic’ than her. Furthermore, not all the media attention thrust on MM is positive. Fifty years after her death, she is still vulnerable to exploitation and abuse.

VibeVixen don’t do themselves any favours by citing two quotes wrongly attributed to Marilyn (see ‘Misquoting Marilyn’ by Marijane Gray.)

The recent tributes to Monroe primarily focus on her glamour, which is recognised worldwide. However, VibeVixen is right to also praise Lena Horne for her talent, beauty and wit. Marilyn’s friend, Dorothy Dandridge, was another black icon of the era.

Maybe it’s more interesting to ask why black women are drawn to Marilyn on a deeper level. She was known for her progressive views on race in an era when segregation was still commonplace in parts of the US.

Journalist W.J. Weatherby asked his girlfriend, Christine, a young black woman whom he had met through the Civil Rights movement, why Monroe appealed to her more than other white stars. ‘She’s been hurt,’ Christine told him. ‘She knows what the score is, but it hasn’t broken her.’

Prefix magazine thinks that ‘Young Forever’, a new track from Nicki Minaj, might be a reworking of her ‘Marilyn Monroe’ demo (minus the fake MM quote), which leaked last week.

“I mean Marilyn Monroe, she’s quite nice/ But why all the pretty icons always all white?” – Jay Z

MTV Hive looks at references to MM in Hip Hop: while Nicki Minaj and Brianna pay tribute to her glamour, male rappers aren’t always so complimentary. (But then, sexism has always played its part in Hip Hop…) 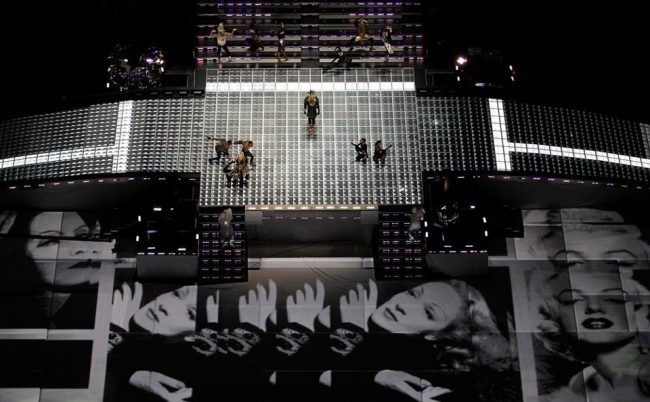 Hot on the heels of her MM tribute in the ‘Give Me All Your Luvin” video, Madonna used another famous Monroe image for her performance of ‘Vogue’ at Sunday’s Superbowl.

One of Madonna’s special guests was rapper Nicki Minaj, who has just recorded a new track dedicated to Marilyn. (I like it, though I wish Nicki had researched her MM quotes a little more thoroughly when she wrote the lyrics!) 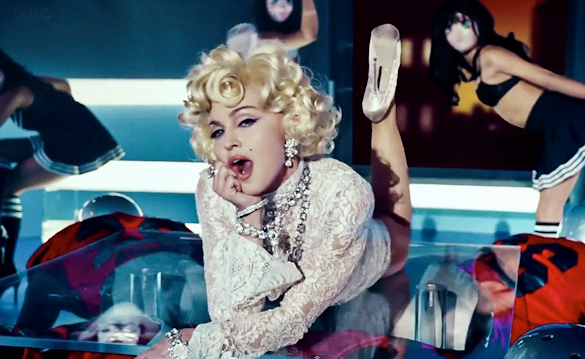 Madonna dons a curly blonde wig in the video for her new single, ‘Give Me All Your Luvin”. M.I.A. and Nicki Minaj (a big MM fan) also go blonde. 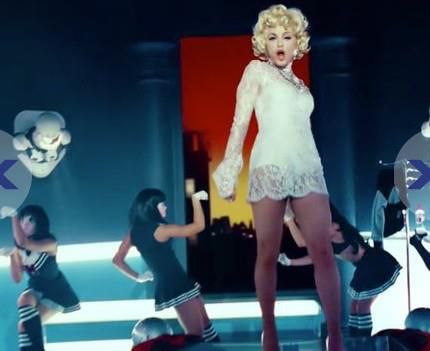 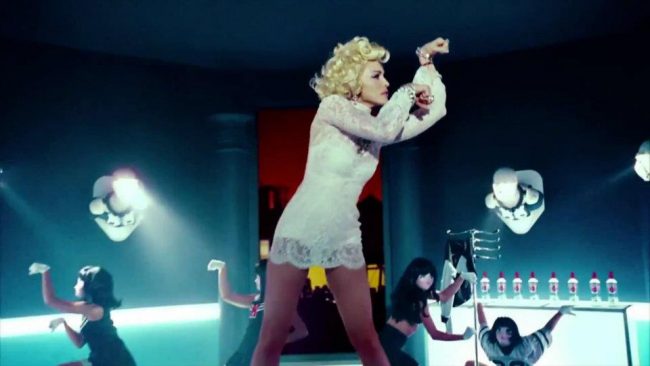 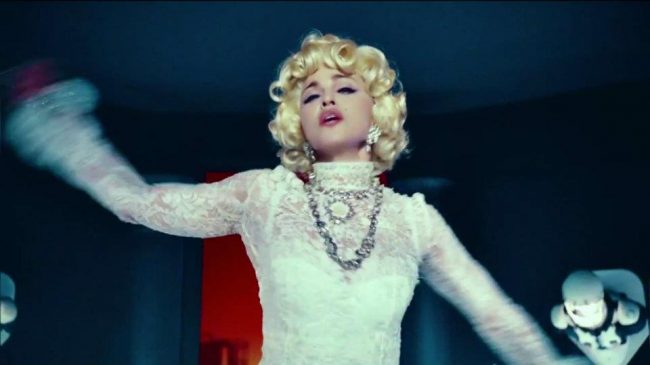 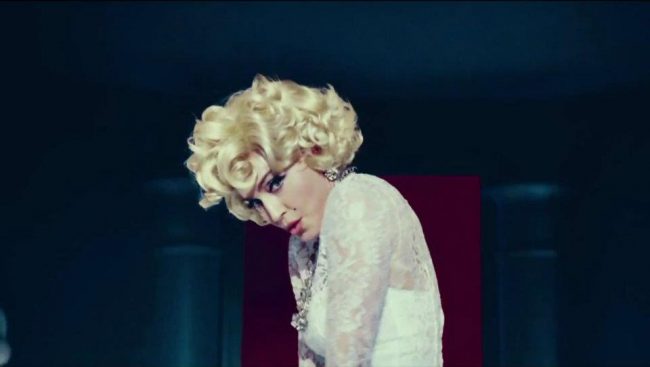 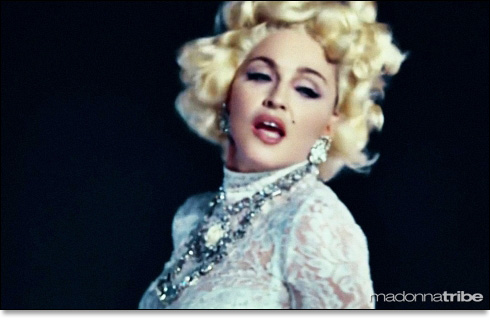 The look is very much like Marilyn’s circa 1954. As we know, Madonna was heavily influenced by Marilyn’s style early on in her career, and she sported a similar hairstyle in the 1990 film, Dick Tracy. 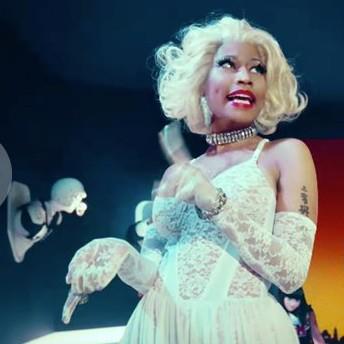 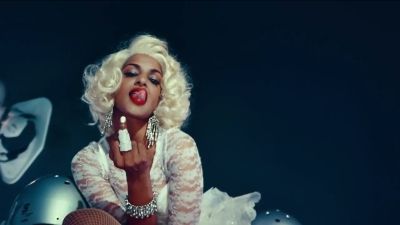 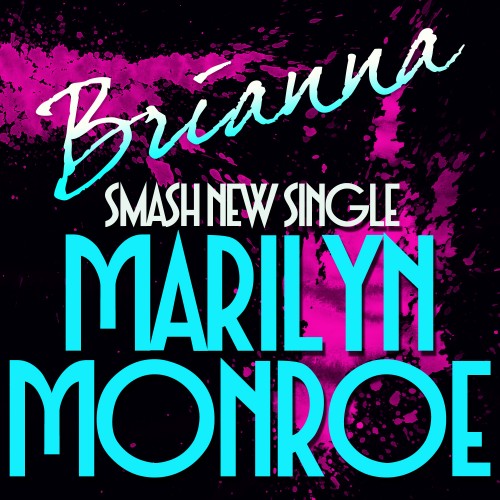 Upcoming rapper Lil Brianna has released a new track, ‘Marilyn Monroe’. “Brianna comes through with a new ‘figure-tribute’ type of track that have been popular nowadays,” says The305.com. “But the beat on this is not too shabby. It knocks. And Brianna definitely flows on it.” Listen now on Youtube. 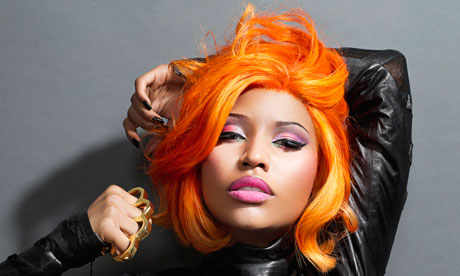 “When I’m doing shoots like this, I pull a Marilyn Monroe and I think Madonna, Grace Jones. I just think of who didn’t give a damn! I like attitude – that mystery – I like that in women …”