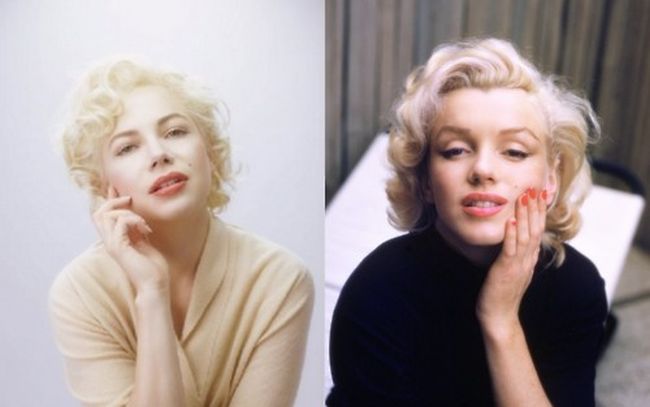 Over at Betty Confidential, Melissa Carter admits that she liked Michelle Williams’ performance in My Week With Marilyn more than she expected:

“It was incredibly ambitious and brave to take on this role. For any woman to offer herself up for comparison to an icon, considered by many to be the most beautiful of all time, is daring, to say the least. But Michelle nailed it. You soon forget that it is a performance and begin to truly see the essence of the iconic figure whose image you have mindlessly viewed a thousand times. Michelle did what even Marilyn was never able to do for me: show her as a sympathetic, complex woman possessing more depth than her pin-up image offered. Because of Michelle, I appreciate Marilyn more than ever.”

“I saw her newest movie, My Week with Marilyn, this weekend and wondered what kind of connection she might have with Monroe.

That so well describes the kind of compelling attraction that nodal connections can indicate. I’m thinking too of Williams’s ability to capture the beguiling (and sorrowful) quality of Marilyn’s appeal. She was able to feel deeply into Marilyn’s emotional nature — at least enough to create a beguiling film presence herself.

Williams was born on the day of a New Moon at 16°50 Virgo. (The Moon traveled between 14° – 26° Virgo that day.) She has the Sun, Jupiter, (and maybe the Moon) closely square to Neptune. Her sturdy Virgo nature is also porous and malleable, a gift for an actor.