This photograph of a determined-looking Marilyn, arriving at the Comedy Theatre for the London premiere of husband Arthur Miller’s play, A View From the Bridge, in October 1956 – watched by a wanly smiling Sir Laurence Olivier, with whom she was filming The Prince and the Showgirl – was taken by Brian Seed, an Englishman who worked for Life magazine during the 1950s and 60s. A selection of his work is published today on the Time-Life website.

Unpublished at the time, Brian Seed’s photos of Marilyn are now in demand. In 2013, Brian – who now lives in Illinois – was interviewed by the Chicago Sun-Times. ‘That Marilyn Monroe was a really smart cookie,’ he recalled. ‘Look at this picture — she’s looking directly at me, because she knows I’m likely the only photographer in there who’s working for a magazine, and that the photo that would result would not be used in one day’s paper and then gone forever.’ 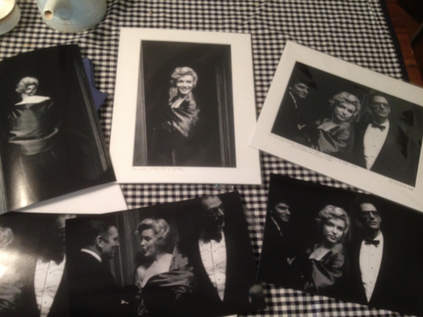 Colin Wilson, the British author whose first novel, The Outsider, was published to acclaim in 1956, has died aged 82, reports The Guardian. Initially feted as a major literary discovery, Wilson failed to repeat his early success, but published over a hundred books. He also met Marilyn Monroe in London during filming of The Prince and the Showgirl, as retold on the excellent Nickel in the Machine blog.

“On the 12th October 1956 on his way home from another party (at Faber with TS Eliot in attendance no less), and apparently worse the wear from champagne, Wilson noticed huge crowds outside the Comedy Theatre situated just off the Haymarket. Intrigued he asked the taxi driver to drop him off and he managed to make his way through the thronging crowds to the stage door.

The huge crowds were there to see Marilyn Monroe who was currently in London to appear in a film version of Terrence Rattigan’s play The Sleeping Prince – the film that eventually became The Prince and the Showgirl directed and co-starring Lawrence Olivier.

Marilyn and her husband Arthur Miller had arrived in Britain three months previously in July 1956. The couple had just gone through a tumultuous few weeks. Not only had they just got married the month before but Miller had appeared, three years after his play The Crucible had first been staged, in front of the House Un-American Activities Committee accused of communist sympathies.

Miller had been subpoenaed after applying for a passport to accompany his new wife to London. He refused, in front of the committee, to inform on his friends and fellow writers, and was cited for contempt of Congress – the trial for which would take place the following year.

Monroe, against a lot of advice, had publicly supported Miller through these hearings but generally there was huge worldwide support for the acclaimed playwright. Wary of hurting American credibility around the world, the State Department ignored the committee’s advice and issued Miller with a passport enabling him to accompany his wife to London.

While Marilyn was filming with Lawrence Oliver at Pinewood, Miller decided to put on a rewritten version of his latest play called View From The Bridge to be directed by Peter Brook. The crowds that intrigued Colin Wilson enough to stop his car to investigate, were surrounding The Comedy Theatre in Panton Street hoping to catch a glance of Marilyn Monroe who had come for the premiere of her husband’s play.

Arthur Miller was actually no fan of the ‘trivial, voguish theatre’ of the West End, considering it, not entirely unfairly at the time, as ‘slanted to please the upper middle class’. When the auditions started for View From A Bridge in London he asked the director Peter Brook why all the actors had such cut-glass accents. ‘Doesn’t a grocer’s son ever want to become an actor?’ he asked. Brook replied, ‘These are all grocer’s sons.’

Ironically at the end of the auditions a Rugby-educated lawyer’s son called Anthony Quayle came closest to portraying a working-class American accent and he was chosen to play the main part of Eddie the New York docker.

Luckily Colin Wilson had recently become a slight acquaintance of Anthony Quayle and after pushing through the crowds surrounding the stage-door he used Quayle’s name to be allowed to the party back-stage. He soon saw Marilyn standing alone in front of a mirror where she was trying to pull up a, very beautiful, but tight strapless dress. Wilson noted that, despite her best efforts, the dress ‘was slipping down towards her nipples’. Not wasting the chance of a lifetime, he went to introduce himself – ‘I had been told she was bookish’, he once remembered .

According to Wilson there was a definite ‘connection’ with Marilyn and she actually grasped his hand as they made their way through the throng to their waiting cars.

A gossip columnist buttonholed Wilson before he left the party and asked what he was doing there. Wilson said that he had spent the evening hoping to talk to TS Eliot and ended up meeting Marilyn Monroe.

The next morning the columnist duly wrote about the young author meeting Marilyn at the premiere adding that Wilson, while there, had been asked to write a play for Olivier.”

Michelle Morgan interviewed Wilson for her 2012 biography, Marilyn Monroe: Private and Undisclosed, detailing a second encounter between Wilson and MM:

“On 18 November, during a last public appearance in England, the Millers attended an intellectual discussion at the Royal Court Theatre. The event was supposed to be dedicated to the state of British drama, but was quickly transformed into a war of words between authors Colin Wilson and Wolf Mankowitz. The two members had opposing views on most subjects, leaving the other members of the discussion panel, Arthur Miller, Kenneth Tynan and Benn Levy, lost for words. Sitting on the fourth row and dressed demurely in a black suit, Mrs Miller looked tired but calm as the discussion took place on stage. Wolf Mankowitz remembered that there was a great deal of excitement when Marilyn entered the building, as once again there were rumours abounding that the star was pregnant. He recalled that there was a lot of fuss in order to find her a seat, and many people were ‘running around as if she were about to have a baby on the spot.’

Having been brought in to discuss great British drama, Mankowitz was disappointed to discover that Marilyn’s presence destroyed the point of the occasion, as the audience was far more interested in trying to see her, and Arthur Miller seemed so preoccupied that he could hardly concentrate on the discussion at all. Still, Mankowitz managed to say a few words to Marilyn at the end of the discussion, although he remembered she wasn’t too communicative – something he put down to the rumoured pregnancy.

Colin Wilson also remembered meeting Marilyn in the backstage of the theatre, after the discussion had ended. By this time the crowds had become huge outside, so Wilson found himself helping the Millers make their escape by the back door, and recalled Marilyn grabbing his hand during the ensuing escape.” 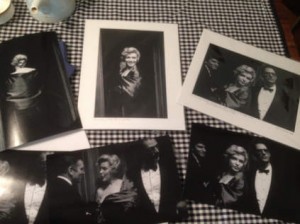 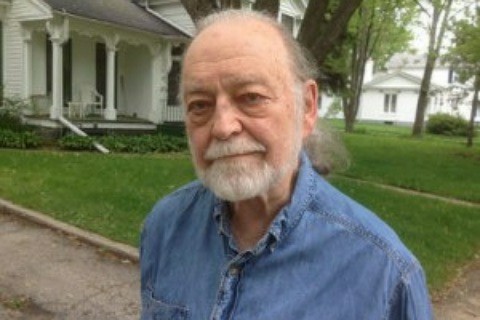