Musician and blogger Aylon Ewing looks at some of Marilyn’s musical highlights, from ‘That Old Black Magic’ to ‘My Heart Belongs to Daddy’.

An insightful look at Marilyn’s writing (as collected in Fragments) from Aylon Ewing:

“Her library was a deep one, she was well read, a woman of deep intelligence.  The dumb blonde gave testament to her great acting ability.  This gives us the clues to the woman within, and it this deep womanly soul that I seek to meet within the fragmentary writing.” 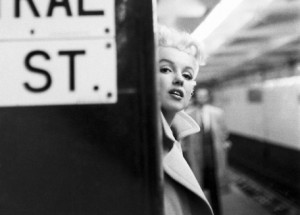 Marilyn Monroe may have been born and raised in Hollywood, but in later life she became a proud New Yorker. After the recent premiere of My Week With Marilyn at the Lincoln Center, the New York Post has paid tribute with an article headlined, ‘Marilyn Lives!‘, featuring interviews with authors Susan Bernard and Lois Banner, and collector Scott Fortner:

‘ “She’s our modern-day Cleopatra — but she was also someone who struggled through life with many personal problems,” he says, citing her troubled childhood, traumatic romances and battles with drugs and addiction. “People can relate to that.” ‘

“What remains is pure inspiration.  Whether that inspires people to be actors and actresses, or whether it gives hope that odds can be overcome in life.  Personal unhappiness, depression and loneliness can be overcome.  Marilyn showed that with generosity of heart, in giving to needy causes, in producing works of art that have uplifted millions, and most of all, by being an open and honest human being who showed her every emotion to a world that never stopped watching.”