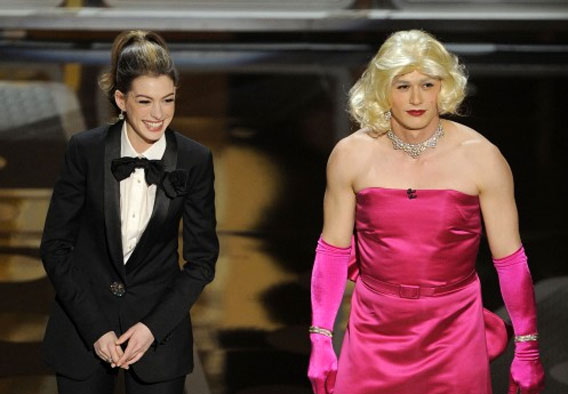 “It puzzled many why a young, interesting actor like Franco would take a lame job like hosting the Oscars…he began the night game and filled with possibility during the opening skit, but as the hours wore on his enthusiasm dampened and waned. Halfway through he tested the very boundaries of our concepts of humiliation by coming out on stage in Marilyn Monroe drag for a piece that was anti-comedy in the finest Andy Kaufman tradition. Finally by the end Franco was apathy personified, lazily reading his lines from the teleprompter, seemingly unclear that ‘The King’s Speech’ had just won Best Picture, and even rolling his eyes in the final moments of the show.”

Hugh Cornwell, best-known as the original vocalist and guitarist for The Stranglers, will be touring the UK this spring.

Music News: One song on the ‘Guilty’ album (from 1997) is called ‘Torture Garden’. I’m very intrigued by the title and the song’s lyrics…

Hugh Cornwell: Ha-ha (laughs). You know, I’m very much into cinema and movies and my favorite movie is The Misfits, it was the last film with Clark Gable and Marilyn Monroe and Montgomery Clift. It was their last movie they appeared in together and it’s about the passing of the age of the romantic cowboy and how their days were numbered. It was really groundbreaking at the time and it was written by Marilyn Monroe’s husband as well, the playwright Arthur Miller. It was very odd that all could make this film and then die. So the lyrics are about that.

Here are the lyrics:

One step forwards, two steps backwards
That’s the dance I want to learn
If I could master it and put a little style in it
I’ll have some fun when it’s my turn

Seven horses, not enough to
Even fill the tank with gas
Monty’s outside, he wasn’t inside
But he knows all things must pass
Bucking broncos, we’re all cowboys
Hanging from another age
Getting sauced, that’s just how the film goes
It’s gotta be better than a wage