Having topped their ‘100 Years … 100 Laughs’ poll in 2000, Some Like It Hot is recommended by the American Film Institute movie club today, with a video introduction by actress Helen Mirren and filmmaker husband Taylor Hackford, plus interviews with Jack Lemmon and Tony Curtis. Plus, some questions for further debate:

-What do you think the phrase ‘some like it hot’ means?

-What are some of your other favorite performances from SOME LIKE IT HOT stars Jack Lemmon, Tony Curtis and Marilyn Monroe?

-What is your favorite film from director Billy Wilder?

-Why do you think SOME LIKE IT HOT is still so beloved after more than 60 years? 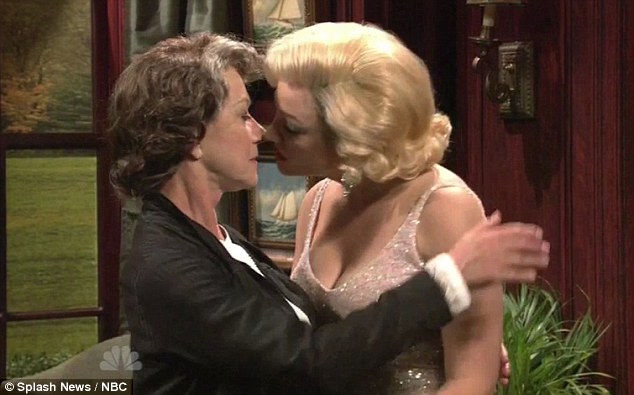 Dame Helen Mirren hosted the latest episode of the US comedy show, Saturday Night Live, yesterday. In one skit, the SNL team parody the controversial mini-series,The Kennedys (which has been criticised by some as historically inaccurate), with ‘The Roosevelts’, in which Mirren, as Eleanor Roosevelt, locks lips with Marilyn Monroe (Abby Elliott.)

Of course, this is a dig at the gossips rather than Marilyn or Mrs Roosevelt. At the time of their fictitious fling, Monroe was only five years old. Nonetheless, some critics were underwhelmed:

“Other easy targets included the widely-panned Kennedys mini-series. Here, SNL offered  The Roosevelts, in which it was revealed that Eleanor Roosevelt (Mirren) was a lesbian who enjoyed kissing Marilyn Monroe (Abby Elliott). I believe this is what’s called a cheap, if nicely ahistorical, laugh.” 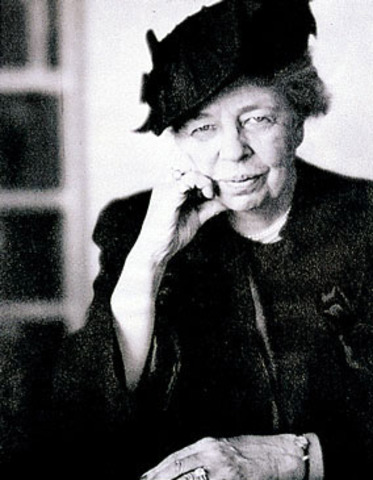 Monroe has been spoofed on Saturday Night Live before, by the likes of Madonna and Charlize Theron. If nothing else, these caricatures reflect her enduring presence in the public imagination.

In real life, Marilyn did know Eleanor Roosevelt a little (although they probably never kissed!) According to friends of the actress, they frequented the same New York beauty salon during 1955 and would talk at length while their hair was styled.

Lois Banner’s MM – Personal includes a letter written in  reply to the Eleanor Roosevelt Foundation, regretting that Marilyn was unable to appear at a charity event as she was preparing for a new film role.

In one of her last interviews, included in Fragments, Marilyn named Mrs Roosevelt among the people she most admired. They both died in 1962 – and almost half a century later, the two women rank among the most celebrated Americans in history.

In an interesting comparison, Harvard Square Library recalls a poignant quote from Marilyn: ‘Nobody ever told me I was pretty when I was a little girl. All little girls should be told they’re pretty, even if they aren’t.’

While Marilyn blossomed into a swan, Eleanor Roosevelt was often mocked for her ‘ugly duckling’ looks. But those who knew her best recognised her inner beauty, just as those who loved Marilyn understood that her beauty was more than skin-deep.