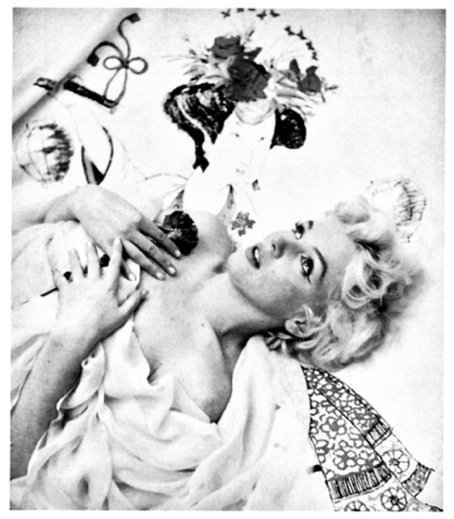 Diana Vreeland, the formidable editor of Vogue and Harper’s Bazaar, included this photo of Marilyn (taken by Cecil Beaton in 1956) in her 1980 book, Allure.

Vreeland worked with Jackie Kennedy on the project, as William Kuhn recounts in Reading Jackie, a new study of the one-time First Lady’s career in publishing.

“Marilyn Monroe had a brief affair with JFK, and by 1980, when Vreeland’s Allure was published at Jackie’s behest by Doubleday, this was well-known…Monroe had committed suicide during the very week that Vreeland was taking over the editorial position at Vogue. She began work just as the outgoing editor was putting together the finishing touches on an issue which, by chance, included an article with a tribute to Monroe and several photographs. Vreeland’s colleague wanted one of the photos taken out. It was too ‘triste’ in light of what Monroe had just done. Vreeland replied, ‘You can’t leave that out! You cannot! It’s got all the poignancy and the poetry and the pathos of the woman in it!’ That was in 1962. In the late 1970s, Vreeland explained what she loved about this photo … ‘Marilyn Monroe! She was a geisha. She was born to give pleasure, spent her life giving it – and knew no other way’…What did Jackie say to Vreeland about the Monroe photograph? Probably nothing, but the fact that she silently allowed Vreeland to include it shows Jackie content to acknowledge Monroe’s ur– sexiness, a quality that Jackie did not think she shared with the screen icon.

It seems as if Jackie was able to separate her editorial self from the woman whose husband had a public fling with Monroe. She was thrilled, about the same time she was working with Vreeland on Allure, when a proposal came from Doubleday that promised pictures from Bert Stern‘s last photographic session with the actress. ‘Marilyn Monroe!!!’ Jackie wrote in a memo to her colleague Ray Roberts. ‘Are you excited?’ … Vreeland’s treatment of Monroe was probably like this for Jackie too: a publishing opportunity rather than a moment to reflect on a personal injury. In any case, if injury there had been, she was able to rise above it.” 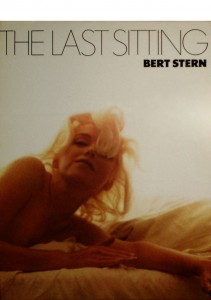 “Stenn also recalled a conversation he had with Jackie about Marilyn Monroe, a topic that he had avoided touching upon. That’s why he was surprised when she brought it up. Jackie didn’t mention Monroe in the context of JFK but rather as part of a continuum with Jean Harlow: both of them were blondes who made their sexual appeal the center of their screen personalities. As with Vreeland, Jackie was willing to discuss Monroe with Stenn in a completely dispassionate, even admiring way.”