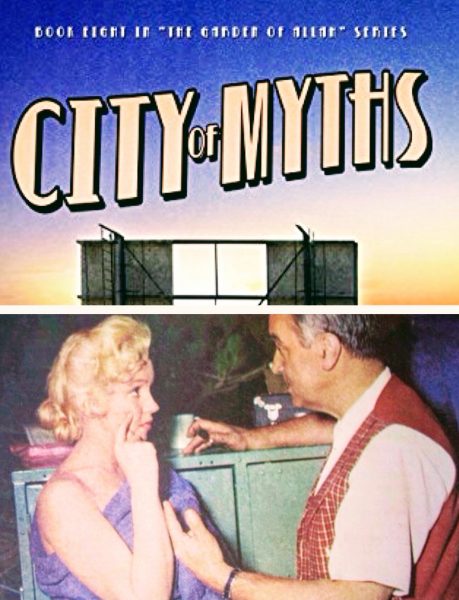 Martin Turnbull is the author of the ‘Garden of Allah’ series of novels set during Hollywood’s golden age. Previous books have covered the making of such classic films as Gone With the Wind and Citizen Kane; historic events from World War II to the Red Scare; and threats to the movie capital from television and gossip rags. Now Marilyn’s conflict with Fox studio head Darryl F. Zanuck is featured in the just-published eighth instalment, City of Myths. Although his books are fictional, Turnbull has an encylopedic knowledge of Old Hollywood, and City of Myths begins, Marilyn is re-shooting scenes for River of No Return with Jean Negulesco (seen in the above photo), after clashing with director Otto Preminger. City of Myths is available in paperback or via Kindle – and it’s also on offer as part of an Amazon ebook bundle with Turnbull’s other novels.

“When you live in a city built on shifting sands of myth, it can be hard to know which way is up. Kathryn Massey spends her days spreading rumors and keeping secrets. Losing herself one headline at a time has left Kathryn’s personal identity scattered—and dumps her at the narrow end of the bargaining table with the man she trusts the least. Gwendolyn Brick has simpler aspirations. As a costume designer, her sights are set on glamour, not heights of fame. But her friendship with Marilyn Monroe puts her directly into the crosshairs of studio head, Darryl Zanuck—and he’s someone you don’t say no to. Marcus Adler is stuck in a much more precarious situation. Exiled in Rome but under the spell of an unexpected romance, he’ll have to learn to say goodbye to everything he’s accomplished in order to give love a chance. In City of Myths the road through Hollywood bears sharply to the right as those who dare to play its game can easily become lost in its intoxicating glow.”