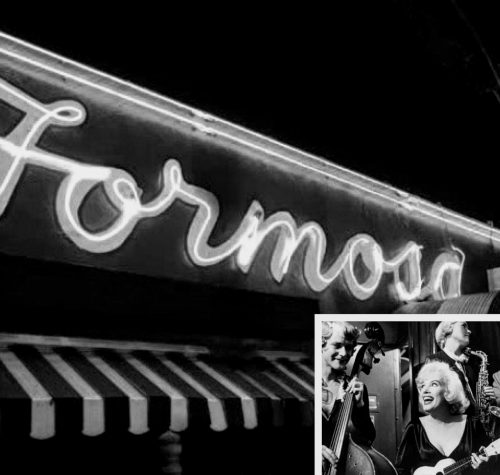 The historic Formosa Cafe on Santa Monica Boulevard – where the cast and crew of Some Like It Hot regularly dined – closed its doors in January. But as Chris Nichols reports for L.A. Magazine, it is now under new management.

“Six months after the Formosa Café on Santa Monica Boulevard unexpectedly shuttered, the West Hollywood landmark is coming back to life. The ancient Chinese restaurant, known for its famous clientele and appearances in films including L.A. Confidential, will be restored by the 1933 Group and will reopen next summer. Owners Bobby Green, Dimitri Komarov, and Dima Liberman have signed a long-term lease with the owners of the West Hollywood Gateway shopping center, which owns the restaurant property.

The group plans to keep the neon façade, the bar, and the 1902 train car dining room, and it will use vintage photos to guide the restoration of the original red vinyl booths and Chinese lanterns that longtime patrons remember. ‘I want it to have the feel of the 1930s to 1960s,’ said Green. ‘They kept adding and adding to it. I probably don’t need a photo of Johnny Depp on the wall.’ A rooftop deck and other additions made in 2001 will be Benjamin Buttoned to look like they’ve always been there.”