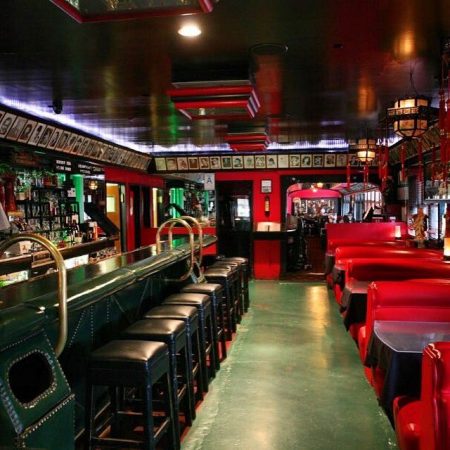 The legendary Formosa Cafe on Santa Monica Boulevard, where the cast of Some Like It Hot dined between filming scenes at the nearby Samuel Goldwyn Studios, closed its doors last month, as Julia Bennett Rylah reports for LAist. (The restaurant features in the Oscar-winning L.A. Confidential (1997), and was more recently the venue for a 2015 benefit for Hollygrove, the children’s charity named after the orphanage where the young Norma Jeane once lived.)

“Prize-fighter Jimmy Bernstein opened the Red Spot in 1925 inside a defunct red trolly car, near a film studio that would, in the late 1930s, become Samuel Goldwyn Studio. It was a simple lunch counter that slowly grew into a much larger operation, and was renamed the Formosa Cafe around the same time that Samuel Goldwyn moved in, according to KCET. They served Cantonese and American food courtesy of Chef Lem Quon, who took over the joint after Bernstein’s death in 1976. He then enlisted the aid of his stepson, William Jung.

The Formosa was not a fine dining establishment, but it was famous for its famous clientele, which included actors and rock icons from the Golden Age of Hollywood and beyond.

In 1991, Warner Bros. replaced Goldwyn Studio and foresaw the Formosa as a parking lot. As often happens in Los Angeles, a group quickly assembled to save the cafe. Their protest were successful, and the little building remained as the city grew around it.

The worse it got, according to many, came via a remodel in the summer of 2015. The restaurant was gutted and revamped … while the exterior of the building, including its neon green sign, is protected, the inside was not.

However, since everyone apparently hated the remodel so very much, Formosa owners decided to put it back to the way it was. The revert was apparently not enough to save the historic restaurant from closure.”

However, all may not yet be lost, according to LA Magazine.

“The longtime operator of the recently shuttered Formosa Café hasn’t even turned in his keys yet, and the building’s owner is already hearing proposals from new tenants. Vince Jung abruptly closed the restaurant this week. New York-based real estate firm Clarion Partners purchased the West Hollywood Gateway shopping center in 2004 and owns the restaurant property. ‘My goal is to find someone that wants to bring back the history,’ said Gabe Kadosh, vice president of leasing firm Colliers International. ‘This is not going to turn into a Sharky’s or something.’

Jung had been on a month-to-month, below-market lease for many years and made several unsuccessful attempts to revive the business by taking on partners and hosting pop-up nights. One of those partners remodeled the interior without permission from Clarion … Now that the owners have control of the landmark they are seeking a new tenant to restore the Formosa.”