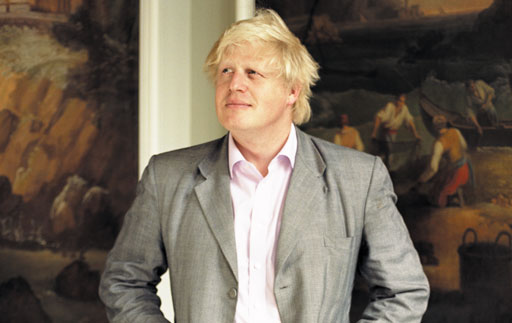 Marilyn won praise from an unlikely source in Metro this week – from the gaffe-prone Mayor of London, Boris Johnson (something of a blond bombshell himself):

“Who do you admire the most?

Aristotle, Marilyn Monroe and Scarlett Johansson – in fact, I think she might have overtaken Marilyn Monroe – and my wife, of course. My wife is way ahead of Aristotle. She’s beaten him in the final furlong.”

The Misfits is now available on Blu-Ray, though disappointingly no extras have been added. This great, if troubled movie deserves far better. Casey Broadwater reviewed it for Blu-Ray.com.

“The Misfits has the somewhat unsettling distinction of being the last film both Clark Gable and Marilyn Monroe ever completed …This lends a sadness and sense of weightiness to the film, which has come to be seen as strangely prophetic about the personal lives of its stars. And this makes sense; The Misfits is a deeply personal film, especially for Monroe. The platinum starlet’s then-husband, Pulitzer Prize-winning playwright Arthur Miller, wrote the script as a kind of present for his wife—who wanted to prove she could play more than just her usual dumb blond roles—but soon after the project started shooting, their marriage began to disintegrate. Miller worked on re-writes throughout production, and many of his additions were semi-biographical, hinting at various troubles in Monroe’s private life. The shoot itself was turbulent …Yet, despite the behind-the-scenes chaos, The Misfits is very nearly a masterpiece. Not quite, but nearly.”

Happily, Some Like It Hot has also been released, with all the extras from previous DVD editions.

“This was—if you’ll pardon the pun—ballsy stuff for its time, and Some Like It Hot, released without MPAA certification, presented a direct challenge to the soon-to-be-outmoded Hays Code … Some Like It Hot deserves to be listed alongside writer/director Billy Wilder’s other masterpieces—it’s as lasting and influential as Double Indemnity or Sunset Boulevard—and it’s widely regarded, for good reason, as one of the greatest American comedies in cinema history.”

Marilyn Wines have released their 2010 Sauvignon Blonde in time for summer. And what better image to toast the season than Monroe’s ‘skirt-blowing scene’ from The Seven Year Itch?

“The 2010 vintage Sauvignon Blonde™ is a 100% varietal from the Yountville district of Napa Valley. Varietal aromas are a distinct combination of ripe grapefruit and pineapple lending to a classic balance of Sauvignon Blanc characters. The flavors are fruity, crisp and lingering.”

A trailer for the upcoming TV series, Smash, has been previewed on NBC. The pilot episode concerns an attempt to stage a musical based on the life of Marilyn Monroe. An established actress (Megan Hilty) competes with an unknown (Katharine McPhee) for the lead role. Described as ‘Glee for grown-ups’, Smash will be shown on NBC in the US later this year.

McPhee is a natural brunette, but the above photo, taken in 2009, shows what she might look like as a blonde. 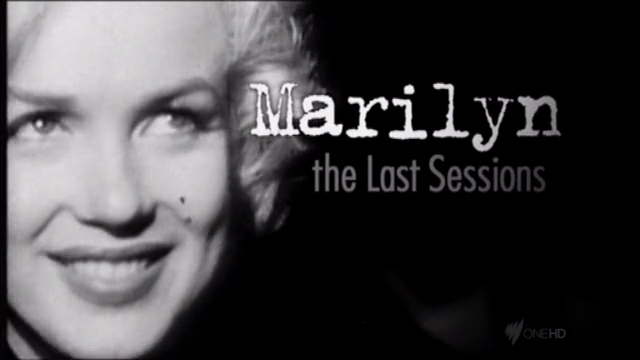 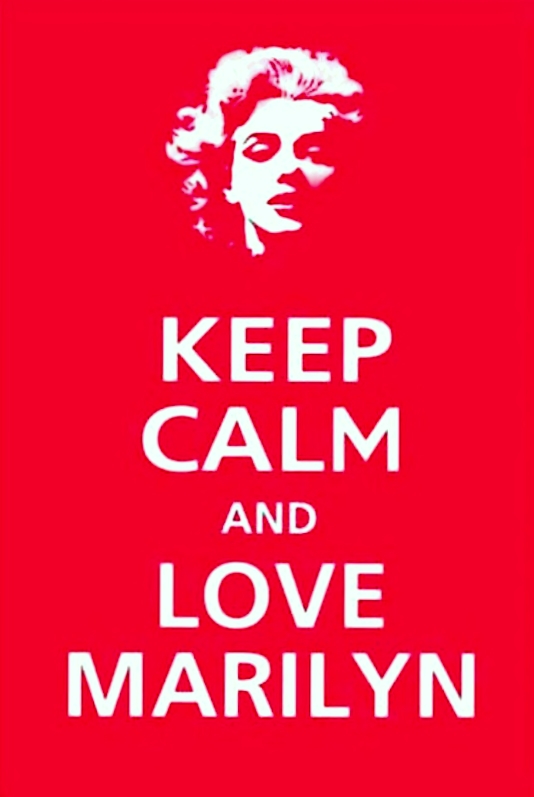 Over at MM Collection Blog, Scott reports on two upcoming opportunities for fans: a book by Tony Graham, showcasing collectors, and a documentary, ‘With Her’, from producer Laurent Morlent, featuring testimonies from fans. 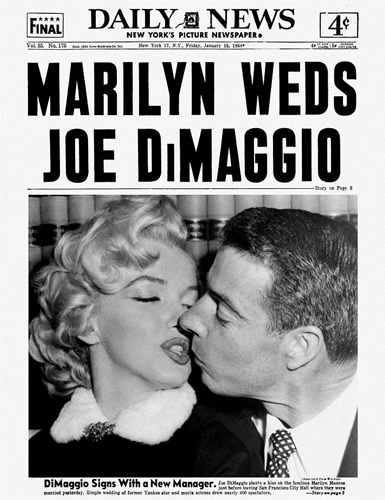 Marilyn’s wedding to Joe DiMaggio, at San Francisco City Hall in March 1954, features in Weddings and Movie Stars, a lush pictorial book from Reel Art Press (who brought us The Rat Pack last year.) This latest release is priced at a slightly more affordable £49.95.

“Just the kind of indulgence for now- lots of lovely gowns and beautiful beaming couples posing on their big cheesy day. Starting from the 1920′s, this tome articulates many fashion trends, iconic movie stills, and that hint of celebrity buzz we all know and love to gorge on.” 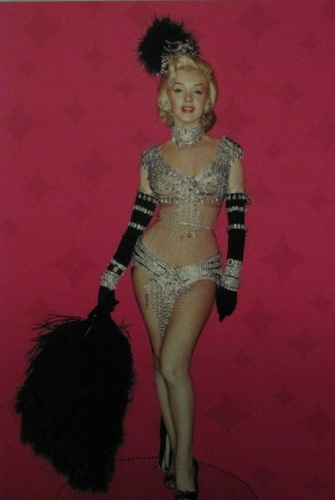 On Monday, July 11, at sunset (between 8-9pm) in Bryant Park, NYC. Part of the HBO Summer Film Festival, which includes other classics from Hollywood’s golden era (High Sierra, The Lady Eve) as well as more recent film favourites.

To win reserved seats and other HBO prizes,  visit the Bryant Park Blog before Thursday, May 19. 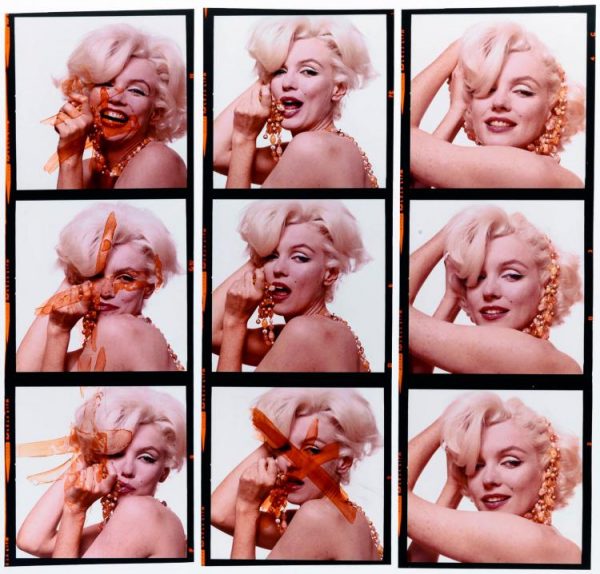 An enlarged Fuji Crystal Archive print contact sheet taken from Bert Stern’s ‘Last Sitting’ with Marilyn in 1962 (printed 1979, recently valued at $14,000 – $18,000), features in the Important Photo Books and Photographs auction at Swann Galleries, NYC, on May 19.

Len Steckler, who photographed a fateful meeting between Marilyn and the poet, Carl Sandburg, in 1961, is the subject of a new exhibition opening today at the Paley Center, Los Angeles.

“The Center’s multimedia showcase includes Steckler’s acclaimed photographic series The Visit, a 1961 chronicle of an encounter between Marilyn Monroe and Carl Sandburg, and Off the Wall, a recent series of images that, in the artist’s words, “challenge our often-dismissive eyes to linger on imagery and experience the discovery of how to ‘see’ what is beautiful and compelling in these complex times.” With video footage of his acclaimed commercials, such as Joe Namath in pantyhose for Hanes, short films, and television projects including the Emmy-winning Free to Be…You and Me rounding out this multifaceted artist’s showcase.

As a commercial artist, he introduced the world to Diet Pepsi and developed major advertising campaigns for AT&T, Revlon, and American Airlines among others. His story illustrations and photography have appeared in a diverse array of publications including the Saturday Evening Post, Ladies Home Journal, Life, and Look magazines, and he helped shape the direction of modern fashion with his stunning fashion photography in Vogue and Harper’s Bazaar.”