In Bert Stern: Original Madman, Shannah Laumeister’s 2011 documentary about the photographer, Stern discusses his infamous ‘last sitting’ with Marilyn. He spoke to Time magazine recently, and you can watch a clip from the film at Nowness.

“After I set up the studio [at the Bel-Air] the front desk rang ‘Miss Monroe is here’ I decided to go down and meet her. I met her [for the first time] on the pathway to the suite. She was alone wearing a scarf and green slacks and a sweater. She had no make up on. I said ‘You’re beautiful,’ and she said, ‘What a nice thing to say.’

[In the suite] she looked at what was there and asked about makeup. I said I didn’t think we needed any makeup, but how about a little eyeliner? She picked up one of the scarves, which was chiffon, you could see through it. She looked [at it] and said, ‘Do you want to do nudes?’ So it was her idea.”

However, in his 1982 book, The Last Sitting, Stern detailed a more complex version of events:

“She lowered the scarf, looked at me and said, ‘You want to do nudes?’

She’d seen right through it.

‘Well, how much would you see through it?’

‘That depends on how I light it,’ I said.

George Masters [hairdresser] came in. She said, ‘George, what do you think about these scarves and doing nudes?’

I held my breath.

Thank God. If he had said, ‘Oh, no, how gauche,’ the whole thing would have been off in a second. Gone.

She was that vulnerable.” 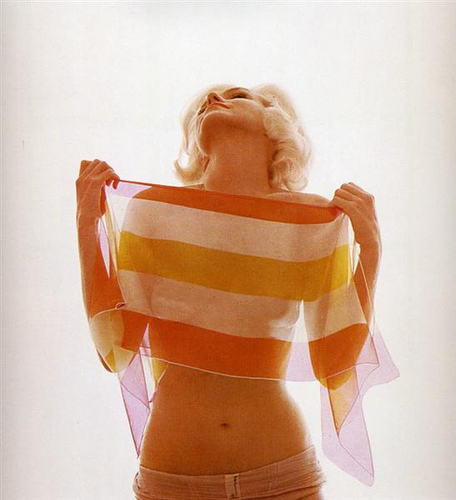 As the shoot began, Marilyn made it clear exactly how much she wanted to reveal:

“Marilyn walked onto the set in her bare feet, a glass of champagne in one hand and an orange striped scarf tied around her bare bosom. She still had her green slacks on.

‘I’m not going to take off my pants,’ she declared. 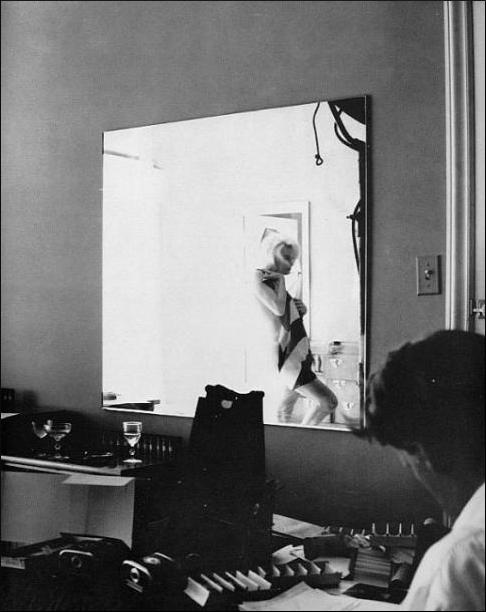 It was not until late in the evening that Marilyn finally stripped:

“It was late, close to dawn, when I finally got all her clothes off…’You know, for this one you’ve really got to take your pants off,’ I said.

I expected her to call for George, who by now was falling asleep in the other room. But she just said, ‘Okay.’ We’d already gone so far in the pictures; what was there to be shy about? She stepped into the archway between the rooms and, holding the scarf around her like a towel, wriggled out of her slacks. And then she walked back out onto the white paper.

I started to shoot. This was the way I’d wanted her all along. Her beautiful body shone through the harlequin scarf in a tantalising, abstract hide-and-seek.

Until she dropped it. And I shot it. Just for myself.

One glimpse, one stolen frame.

The same text has been used in all subsequent editions of the book. While I don’t believe that Marilyn was duped into posing naked, it was something that came about gradually (and with a lot of coaxing from Bert.)

Marilyn later vetoed many of Stern’s photos, though after she died, he published them anyway.

By the way, in the final shot that Stern mentioned, Marilyn looks distressed – as if dropping the scarf was an accident, not something designed to titillate. Judge for yourself here.