UK viewers can enjoy an ad-free festive screening of Some Like It Hot on BBC2 at 3 pm this Monday, December 30, as part of a Billy Wilder double bill (preceded by The Apartment at 1 pm.) Andrew Collins, who penned this review for the Christmas Radio Times, profiled Marilyn for the same magazine back in 2011 (see here.) 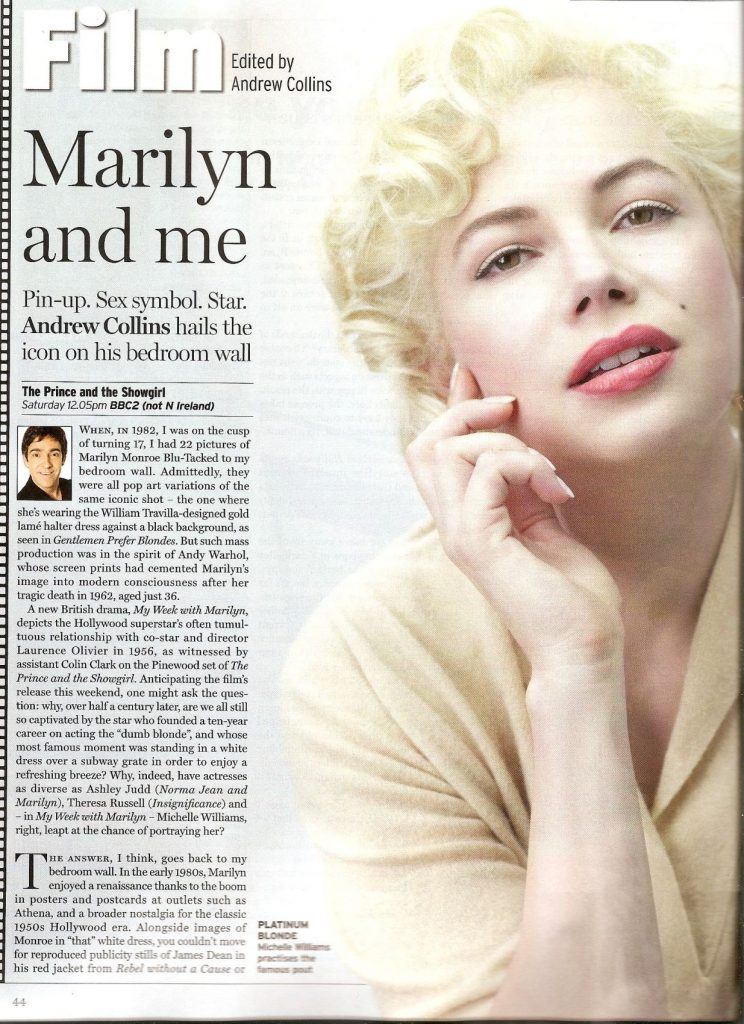 A touching article in this week’s Radio Times (November 22 issue), in which the writer and DJ, Andrew Collins, declares himself a diehard fan (click on images to enlarge.) 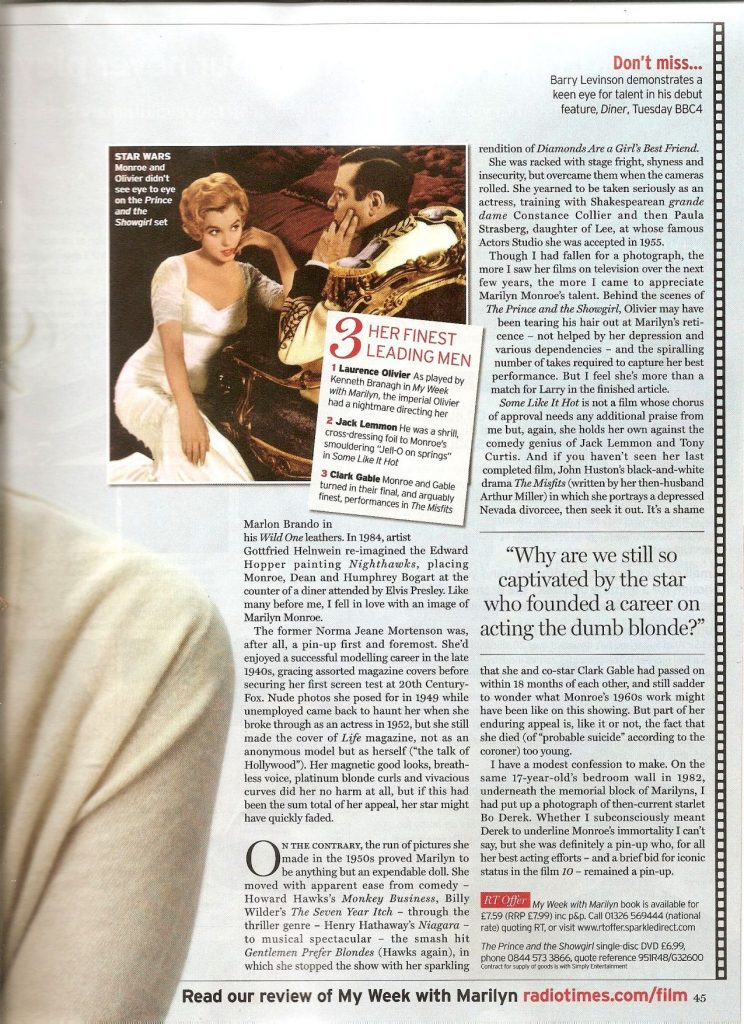 Broadcaster and journalist Mariella Frostrup has told the Radio Times that after presenting the BBC Radio 2 series Blonde on Blonde in 2009 (profiling three iconic blondes, Doris Day, Diana Dors and Marilyn Monroe), made her realise how little the ‘dumb blonde’ stereotype has progressed over the years. (Unfortunately, Blonde on Blonde is not currently available on BBC i-Player. It was an interesting series, despite some factual errors. If it is repeated anytime I will mention it here.)

The broadcaster, 47, said she “would have thought twice” about going blonde at 16, when her father’s death left her grey, if she had “known then what my shade of choice suggested to the world”.

“Few women may be born blonde but that hasn’t stopped it becoming a noun. In blonde world whether you’re a brain surgeon, a lapdancer or an oligarch’s wife, it’s all the same. Blonde is the description – anything else merely informs us of the variety. Pinch me if I’m living in the 21st century.”

“Beneath the make-up and beyond the studio publicist’s spin a sorrier bunch of women you couldn’t stumble across… like so much else in their lives their most celebrated asset, their platinum locks, were fake. Perhaps it was the shadow of that deception, one of the many required to qualify as screen sirens, that saw so many of their dreams end in tragedy.”

According to Frostrup: “Being blonde means never saying you don’t understand unless you want to be predictable. Being blonde means always trying to tell the blonde joke first.” She added: “Our roots are often only skin deep and, despite assumptions to the contrary, proven side effects don’t include brain impairment.”

She cited Meryl Streep, Hillary Clinton and the pop singer Lady Gaga as examples of women who combine blonde with brains. And she quoted Dolly Parton, who famously said: “I’m not offended by all the dumb blonde jokes because I know I’m not dumb – and I’m not blonde either.”

It’s not the first time Frostrup has spoken out about sexism and ‘blonde prejudice’. “Men are hideously predictable,” she told the Radio Times back in 1998. “They all want blondes with big breasts. Men expect a sweet, cute blonde and get me. They have a problem with women who are bright and good-looking. Women, on the other hand, would welcome the combination in men, given the opportunity.”