Fifteen images of Marilyn – taken throughout her career – are on display at Dundee’s art24sevenmedia gallery, and will be auctioned, reports The Courier.

“The collection of 15 pictures have been taken from vintage negatives shot by infamous Hollywood photographers Gerry Franks and Earl Leaf, among others.
The candid images include Marilyn in a drama class with coach Natasha Lytess and relaxing in the garden of Johnny Hyde who is credited with discovering her.

There are also test shots taken early in her career for publicity and to see if she was photogenic.

Gallery owner Fiona Henzie said: “The photographs are taken from vintage negatives and some are very collectible items.

‘They are totally unique and have only been seen once before in a museum in Holland.

‘They have all been in the hands of some quite famous people.

‘One was owned by Elizabeth Montgomery, also known as Samantha in Bewitched, before she sold it on.'” 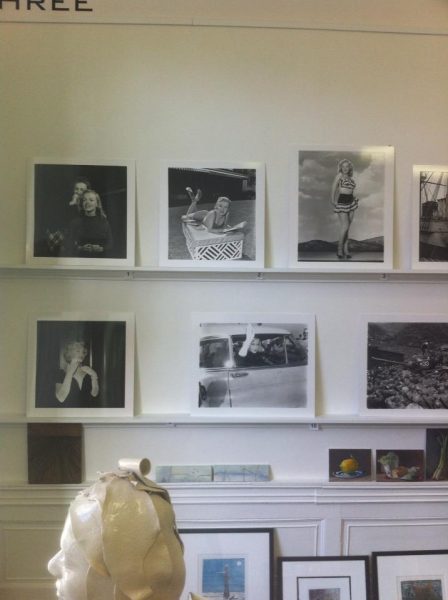 I contacted Fiona via the gallery’s Facebook page, and she gave me further information about the collection:

“The 15 Marilyn pics will remain on show along with the other great photography during March…Everyone seems to have their own favourite – in the meantime if anyone would like to place an offer or request further information they can send a message to bids@art24sevenmedia.com

It is a silent auction so all the information will be collated and the highest bids will be contacted… They have a very fair estimated value of £1500 (in today’s market) and we can guarantee that these are originals taken from the original vintage negative at the present time as a one off but sole exclusivity may be available. I will be posting details of where they can all be seen more clearly. The Scotsman newspaper are interested in doing a feature for this coming weekend .. the actual interview still has to be confirmed so I will try and post the news on our FB page if I believe it is happening.”

All photos on this post were taken by Fraser Penney – my fellow Immortal Marilyn staffer and longtime friend of ES Updates. He visited the gallery this weekend. (Click on the images below to enlarge.)