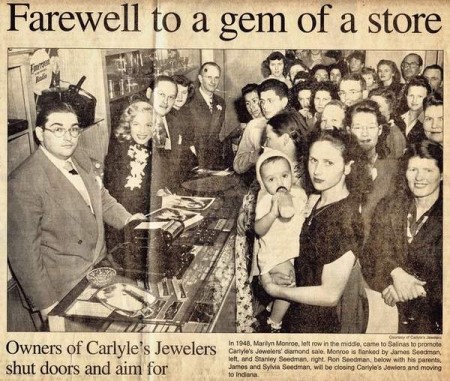 A newspaper clipping from an appearance by Marilyn at Carlyle’s Jeweler’s in Salinas, California, in 1948 (during her trip she was also crowned ‘Artichoke Queen’  in nearby Castroville.)

“In 1948, she came here to help promote a diamond sale at Carlyle’s Jewelers, 362 Main St. The store had hired a starlet named Noreen Nash, but Nash had to cancel.

So Monroe filled in.

On that trip, she checked into a room at the Jeffrey Hotel in the 200 block of Main Street.

Before her abrupt arrival, she’d been baking in the sun in Palm Springs. Her nose had burned. It had begun to peel. Still, Marilyn showed up. She stood behind the counter at Carlyle’s.

Patrons squeezed in. Marilyn flashed her brilliant smile. She chatted in an amiable way and autographed pictures of herself.

That day, the jewelry store sold lots of diamonds.”

Last year’s collection of Marilyn’s writings, Fragments, includes a diary entry recording a bus journey to Salinas (though not necessarily at the same time.)