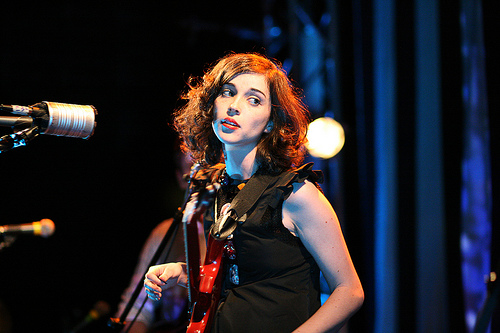 New York-based singer-songwriter St. Vincent has spoken to The Guardian about Marilyn, whose writing inspired ‘Surgeon’, a track on the new album, Strange Mercy:

‘Strange Mercy, she says, is very much about anaesthetising pain, and searching for ways to transform, “to be a whole person”, a sentiment expressed in a line Clark lifted from Monroe’s diaries for the song Surgeon: “Best finest surgeon, come cut me open.” “Marilyn was this relic of the 60s, and not particularly compelling when I was younger, but when I started reading about her, I really sympathised,” she says. “For all the Hollywood glitz, it was a pretty dark life. That line was just the strangest, most poignant line. I wonder how she’d feel about it being put into a pop song.”

The Monroe story, of course, ended badly: she was found dead in her bedroom by her psychoanalyst, her blood filled with nembutal and chloral hydrate. It was ruled to be suicide, though conspiracy theories abound. For Clark, though, there is something somehow redeeming in having been able to look back at Monroe’s troubles and find a spark that could give life to new art. “Creating something out of something unfortunate feels productive,” she says. She gives a small, satisfied nod.’