Did the newly divorced Roslyn Tabor (as played by MM) throw her wedding ring off Reno’s Virginia Street Bridge, and into the Truckee River in The Misfits? The answer is no – while her friend Isabel (Thelma Ritter) mischievously suggests it, Roslyn laughs and proposes to ‘get a drink’ instead.

As recently reported, the bridge is now being replaced. Lindsay of the IAmNotAStalker blog visited the location of Marilyn’s Misfits scene in 2011. 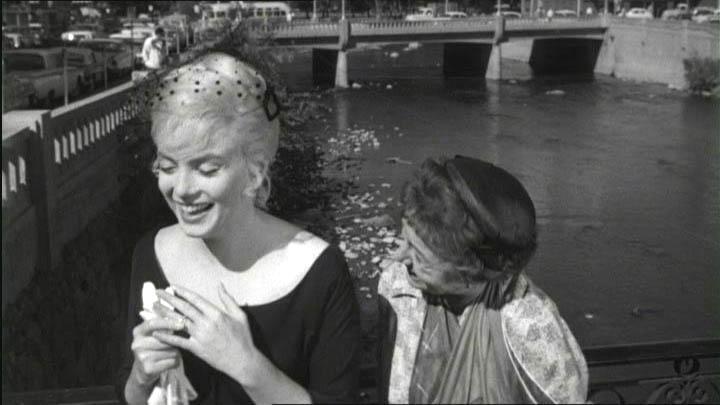 And as Mark Robison reports in today’s Reno Gazette-Journal, the long-held belief that divorcees commonly toss their rings in the river is somewhat exaggerated – but not without precedent. (In fact, Hollywood had burnished the myth for decades before Marilyn set foot on that bridge.)

“Some have speculated it started with the 1961 film The Misfits where Marilyn Monroe’s character thinks about throwing her ring into the Truckee.

Nevada historian Guy Rocha goes back further. In a Reno Gazette-Journal column published in 2008, he writes, ‘The first-known account of throwing wedding rings into the Truckee River (is) in the pamphlet titled: Reno! It Won’t Be Long Now’ NINETY DAYS AND FREEDOM from 1927.

This topic of freedom in Reno refers to the city’s liberal divorce laws, which allowed couples to get divorced after a short residency of three months, often spent in a hotel casino. (The time was shortened even more later.) Other locations in the first half of the 20th century made divorce much harder and required much longer waits before finalizing the decision. This made Reno especially popular among people who needed a divorce before they could marry someone else.

A 1931 book called The Reno Divorce Racket has a photograph of Marjorie MacArthur and Dorothy Foltz throwing their wedding rings into the river, Rocha reported.

Many stories in magazines and newspapers followed, some debunking the trend, others celebrating it.

Rocha mentions a 1950 United Press news story about 50 Junior Chamber of Commerce volunteers cleaning the river and finding one — but only one — wedding ring.

Rocha concluded, ‘The tradition might have been fakelore originating in promotional literature, then reinforced many times by publicity gimmicks. While not common practice, real wedding rings found their way into the Truckee because some divorcées acted on what they believed to be a tradition.'”

The Virginia Street Bridge, which stands over the Truckee River in Reno, Nevada – where Marilyn filmed a scene for The Misfits with co-star Thelma Ritter – is set to be replaced, reports the Las Vegas Review-Journal.

“Built in 1905, the reinforced concrete bridge has succumbed to years of wear and tear and is being replaced with a new structure. As portrayed in the 1961 film, the bridge was known as the place where newly divorced women who came to Nevada because of the state’s short residency requirement would throw their wedding bands into the Truckee River.

History and preservation buffs are disappointed that the bridge will soon be just a memory. Memories are still fresh of the loss of the historic Mapes Hotel, which sat on the north side of the bridge, imploded in 2000.

But residents are also excited about the new span, which will have a single arch and become a new gateway into the resurging downtown district.

Kerrie Koski, street program manager for the city Public Works Department, said the bridge is not only unsafe but also causes problems during flooding. It is the most unsafe bridge in the state, she said.

The new $18 million span will incorporate elements of the original bridge — to honor the history of the bridge — when it opens next May, including the lights. The historic railing has been salvaged and will be used in an area adjacent to the bridge.

According to an article in Reno Historical, a special project by the University of Nevada, Reno Libraries, the bridge was known as the ‘Wedding Ring Bridge’ and the ‘Bridge of Sighs,’ and became the subject of national folklore.

According to the article by Mella Harmon, the legend, dating to at least the 1920s, held that divorcees, upon receiving their final decree from a judge, exited the Washoe County Courthouse, kissed the columns supporting the courthouse portico and proceeded past the Riverside Hotel to the bridge to throw their wedding rings into the river.

In The Misfits, Marilyn Monroe’s character, Roslyn, is told the tale while standing on the bridge, considers it for a moment, then places her ring back in her purse and heads to Harrah’s for a drink, Harmon wrote.

[Hillary] Schieve said the city is looking at the potential of making pieces of the bridge available to the public, but details are still being worked out.”