A lock of Marilyn’s hair – comprising around 35 strands, and preserved by Kenneth Battelle, her stylist from 1958-62 – is currently on offer from autograph dealer Moments in Time for $16,500, as TMZ reports.  It’s said Kenneth collected several locks as gifts for friends; and though undeniably peculiar, this sale is not unprecedented as two locks of Marilyn’s hair from the estate of Monroe Sixer Frieda Hull were previously sold for $70,000 at Julien’s in 2016. (You can read my tribute to ‘Mr. Kenneth’ here.) 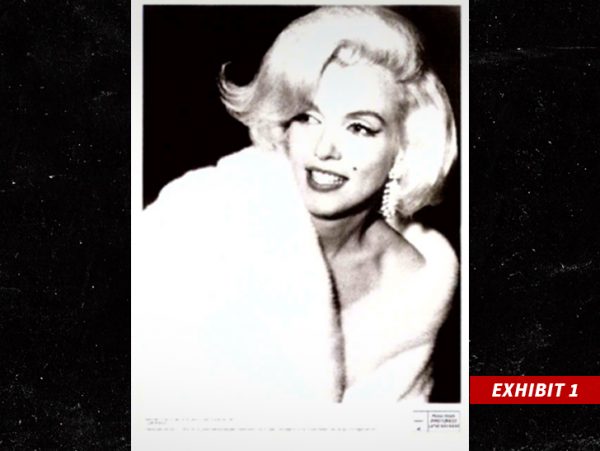 A collector of celebrity memorabilia is suing Vanity Fair for unauthorised use of this photo – showing Marilyn attending the Madison Square Garden concert where she famously sang ‘Happy Birthday’ to President Kennedy in 1962 – in their 2016 magazine special, Vanity Fair Icons: Marilyn Monroe, reports TMZ.

“In docs, obtained by TMZ, [Aric] Hendrix says he’s a collector of historical photographs and owns the photo AND the negative of Marilyn. He’s suing for damages in excess of $1 million. We’ve reached out to Vanity Fair, so far no word back.”

Following the recent news that Seward Johnson’s giant sculpture, ‘Forever Marilyn‘, may soon make a permanent return to Palm Springs, another more spurious story has emerged. Last week, it was widely reported that Marilyn’s former home in Palm Springs had been burgled. However, while Marilyn visited the resort many times, there is no evidence of her ever living there. Bruce Fessier has investigated the rumour for the Desert Sun.

“Aftab Dada, a hotelier and head of the P.S. Resorts organization charged with finding ways to attract tourists to Palm Springs, says [the statue] may be placed in front of the Spa Resort Casino before hopefully landing in the downtown park being developed near Desert Fashion Plaza, where it attracted voyeurs with cameras for 22 months before going on the road again.

Dada, who also runs the Palm Springs Hilton Hotel, is now trying to raise money to ‘bring Forever Marilyn back to Palm Springs where she belongs.’ City spokeswoman Amy Blaisdell says it belongs here because ‘Marilyn Monroe has a rich history in Palm Springs.’

‘She once owned a home in the city’s Movie Colony neighborhood,’ Blaisdell said in a news release, ‘and she was first discovered by her Hollywood agent at the historic Racquet Club.’

Frankly, I don’t think she ever owned a home in Palm Springs. Blaisdell told me Marilyn and her second husband, baseball great Joe DiMaggio, owned a place on Rose Avenue. That’s actually in the Las Palmas district, but, besides that, my sources say it’s not true. I asked Blaisdell where she got her information and she said Dada — the guy in charge of drawing tourists to Palm Springs.

Dada says he learned about Monroe and DiMaggio’s Palm Springs’ roots from the heads of the private equity firm KKR (Kohlberg Kravis Roberts). Founding partners Henry Kravis and George Roberts used to stay at the Hilton …They hung out with DiMaggio and his granddaughter, Paula Hamra, in the Hilton hospitality lounge when the Yankee Clipper used to play in the Dinah, Dada said, and DiMaggio told them he and Marilyn once owned a Palm Springs home.

I looked up Hamra on Facebook. She’s one of two daughters of the late son DiMaggio had with his first wife, Dorothy Arnold, who ran Charcoal Charlie’s restaurant in Cathedral City in the late 1960s and ‘70s. She also led Cathedral City’s incorporation efforts as president of their chamber of commerce from 1973 to 1975.

Hamra didn’t respond to my Facebook message, but Dada said photographer Marc Glassman took a picture of him with the KKR boys and DiMaggio. So I called Glassman and told him I was trying to track down the mystery of whether or not Monroe and DiMaggio had ever owned a home in Palm Springs. I said Dada told me Glassman had taken a photograph of him with DiMaggio and the KKR heads at a Dinah Shore golf reception at the Hilton when DiMaggio mentioned he and Monroe had owned a  Palm Springs house. Glassman confirmed he had taken a picture of them at the Hilton.

‘Unfortunately,’ he deadpanned, ‘no one was wearing a picture on their lapel of DiMaggio and Marilyn in front of their Palm Springs home.’

So I started checking the rumors of Marilyn and DiMaggio owning a house on Rose Avenue. The Internet abounds with reports saying Marilyn lived there … Public records show the house was built in 1961 – one year before Marilyn died … and six years after she and DiMaggio divorced. The house was owned by Audrey Blanchard for more than 40 years until her death in May at age 94. On Dec. 12, 2008, her attorney, Philip S. Klatchko of the Palm Springs firm of Klatchko & Klatchko, contacted the owner of Locations Unlimited, Sylvia Schmitt, demanding she cease and desist spreading the erroneous information that Monroe once lived at Blanchard’s house.

‘In recent months, she has had numerous people come to her front door claiming that her home had been identified by the Palm Springs Chamber of Commerce or its representatives as having once been owned or occupied by Marilyn Monroe,’ Klatchko wrote to Schmitt (then Jenette) a day after talking to her. ‘This claim or assertion is absolutely false and the people coming to her door are an annoyance and a nuisance.’

Tour buses were regularly stopping in front of Blanchard’s home, Klatchko said, and erroneously calling it Monroe’s house. Postcard manufacturers and other businesses were doing the same.

‘After full discussions with those local business entities … they each agreed to stop their reference to Mrs. (sic) Monroe,’ Klatchko wrote. ‘The matter had been laid to rest because in fact there was no truth to the allegation. It has only been more recently that the unwanted visitors to the home have started reappearing.’

Schmitt, who books celebrity homes for movie shoots and rentals, took the reference to Monroe’s house out of her map of celebrity homes. But she probably wasn’t the source of the problem. She says she gained her information from the tour guides who trained her. She passed along one hilarious story of a man who just made up stories as he went along. But more conduits of misinformation simply convey stories that haven’t been thoroughly vetted…

Unfortunately, the city is still perpetuating these myths and now someone is paying for it. Last week, someone burglarized the Blanchard house. TMZ reported it was Monroe’s place and a local TV station repeated that error.”