For a classic movie fan, there are few more festive treats than a double bill of Billy Wilder movies. Some Like it Hot and Wilder’s brilliant follow-up, The Apartment, will be screened at the Hyde Park Picture House in Leeds on December 31st from 3.45 pm. So if you’re in Yorkshire this Christmas, this could be a perfect start to your New Year’s Eve celebrations. 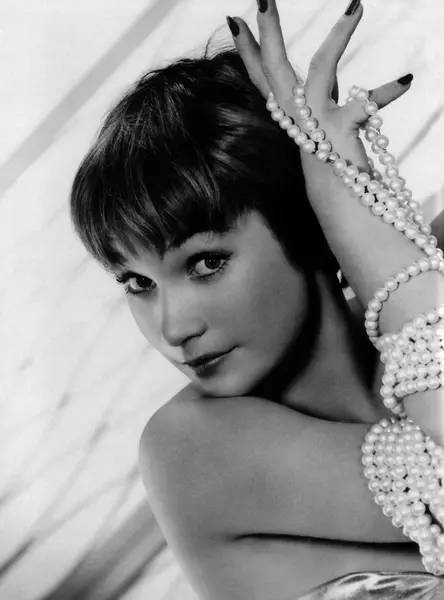 Actress Shirley MacLaine was honoured by the Kennedy Center this week for her ‘exemplary lifetime achievement in the performing arts.’ She began her career on Broadway as understudy to Carol Haney in The Pajama Game, and made her screen debut in Hitchock’s The Trouble With Harry (1955.)

Among MacLaine’s most famous films are Some Came Running, The Apartment, Sweet Charity and Terms of Endearment. Recently she reached a new audience with her role in TV’s Downton Abbey.

In They Knew Marilyn Monroe, Les Harding notes that ‘after Marilyn’s death, MacLaine took over several projects which had been earmarked for her.’ And in recent years, MacLaine has shared some surprising (to say the least) anecdotes about MM.

In 2011, MacLaine claimed that Marilyn attended a preview of The Apartment nude under her fur coat, although photos from the event appear to show her wearing a dress. MacLaine has also claimed to have ‘shared’ Yves Montand – Marilyn’s Let’s Make Love co-star who accompanied her to the screening – with Monroe, implying that she also had an affair with him.

In her 2012 book, I’m Over All That, MacLaine added fuel to the fire of the MM-JFK rumour mill:

“I never had any proof that the Kennedy brothers had intimate relations with Marilyn Monroe, but it wouldn’t be beyond the realm of probability. Once at Arthur and Mathilde Krim’s house in New York, I joined an impressive gathering of movie stars and politicians. Marilyn was there. I saw her go into a private room with Jack. They stayed awhile, until he came out another door. Immediately, Bobby entered the room and stayed until the song that Jimmy Durante was singing was over. I have a picture of that night on my Wall of Life. Of course, the Kennedy brothers and Marilyn could have been talking about world affairs and comparing notes, but most of us thought it was the other kind of affairs they were interested in.”

This appears to be a reference to the party held after Kennedy’s birthday gala on May 18, 1962, which Shirley also attended. In a recent interview – broadcast on CNN – she talks about the gala itself, claiming that Marilyn refused to go onstage and Shirley was asked to stand in for her.

Of course, Marilyn was prone to stage fright – and given her unreliable reputation, it wouldn’t be surprising if a last-minute replacement was considered. However, Marilyn had already defied orders from Twentieth Century-Fox to perform at the gala. In fact, her later dismissal from Something’s Got to Give was partly related to this matter.

Also, Marilyn’s appearance at the very end of the gala was pre-planned. Peter Lawford introduced her as ‘the late Marilyn Monroe’ as a pun on her reputation for unpunctuality. Throughout the evening, her appearance was announced, only for her not to appear. In fact, she performed on schedule.

Interestingly, the sole occasion when Monroe and MacLaine were allegedly photographed together – on Dean Martin’s yacht in 1961 – has been disputed by Shirley herself. Upon writing to MacLaine, a member of Everlasting Star was told that she was not in the photo. It has also been suggested that the mystery woman is French cabaret star Zizi Jeanmaire. 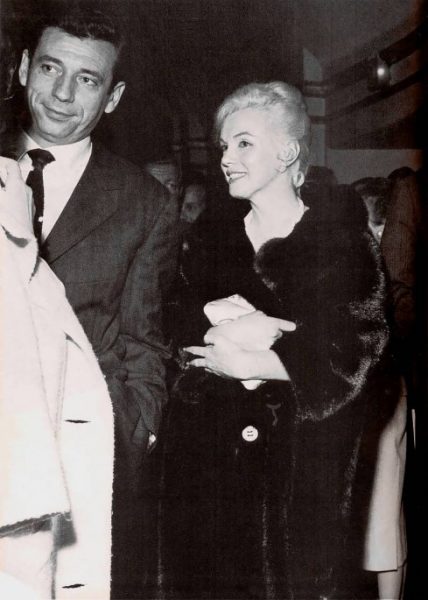 The photo above shows Marilyn attending a preview of The Apartment with Yves Montand in June 1960.

There has been some debate over what dress Marilyn wore that night. To me, it looks a little like the grey halter-dress that she had also worn at a press conference that year, and would wear again in Reno that summer.

However, Shirley MacLaine, star of The Apartment, told guests at the LA Film Fest Q & A last week:

“I’ll tell you a story: I came out of the first screening of The Apartment, and it was at some little screening room here in town. I left before the lights went up, and I walked out of the door and there, up against kind of a bar because they were serving food and drinks, was a woman — a blonde swathed in a white mink coat. I walked over to her just to talk, and she said [whispering], ‘You were so wonderful! Just brilliant!’ She opened up the coat and she had nothing on. Marilyn.”

I find it a little odd that Shirley has not mentioned this detail on her website:

“I remember Marilyn Monroe was at the screening. She had no makeup on and was wrapped up in a mink coat. In her low whispery voice she said… ‘The picture is a wonderful examination of the corporate world.’ My mouth flew open! She got it!”

Also, the fur coat in the photograph is dark, not white. However, Montand – Marilyn’s co-star in Let’s Make Love, with whom she had an affair – told biographer Anthony Summers that MM had once entered his hotel room wearing nothing but a fur coat. And so, whether true or false, the rumour is not unprecedented.

Shirley’s co-star in The Apartment was Marilyn’s friend, Jack Lemmon (her co-star in 1959’s Some Like it Hot.) Both movies were directed by Billy Wilder, with whom Marilyn had fallen out. However, Marilyn was seen embracing Billy at the screening of  The Apartment, so it seems that they must have made up their differences.

While Marilyn has often been criticised for her ‘difficult’ behaviour on film sets, Shirley also found Wilder hard to please. ‘He was un-empathetic,’ she recalled. ‘We looked at a scene in front of everyone, and he stood up in front of everybody and said, “I tried.”‘

Marilyn considered several roles that were ultimately played by Shirley MacLaine: in Some Came Running, Wilder’s Irma La Douce and What a Way to Go! Also, both actresses were friendly with Rat Packers Frank Sinatra and Dean Martin.