Spanish fans may be interested to know that the touring exhibit, Philippe Halsman: Astonish Me! is now on display at the CaixaForum Barcelona until November 6, as Samuel Spencer reports for BlouArtInfo. (I have corrected some minor errors in the extract below.)

“Featuring 300 photographs and documents from the photographer’s extensive career, Astonish Me! is the first Spanish retrospective of the American photographer [born and raised in Austria] who, among other achievements, undertook 110 covers for LIFE magazine. Halsman also popularized the portrait concept of people jumping — at the time a revolutionary idea that has since become a photographic cliché, unavoidable at any graduation ceremony.

Termed ‘jumpology’ by Halsman, jumping was used by him as a psychological tool. He believed that it showed people without inhibitions; as he once said, when someone jumps, “the mask falls.” As such, Halsman saw it as a crucial tool for photographing celebrities, allowing him to cut through the façade of their media image.

Among the jumpologists Halsman shows in the exhibition are Marilyn Monroe, who he tried to convince for three years to jump for a shoot before she finally agreed. Monroe jumped 200 times for the resulting image, which became iconic when it appeared on the LIFE cover in 1957 [actually, it was in 1959.]“

Based in Spain, Maite Minguez Ricart owns one of the world’s largest collections of Marilyn’s personal property, and has just announced that she has loaned many items to Australia’s Bendigo Art Gallery. Opening on March 5, ‘Twentieth Century Fox Presents Marilyn Monroe‘ also features items formerly owned by Debbie Reynolds, and from the collections of Scott Fortner and Greg Schreiner, who head the Los Angeles-based fanclub, Marilyn Remembered.

“The Collection Maite Minguez Ricart has the honor to collaborate with Bendigo Art Gallery (Australia). Curator Tansy Curtin, with 41 pieces belonging to Marilyn Monroe. as dresses, designs of cinema costumes, supplements of her personal locker, awards, photographs of her personal album with handwritten annotations on the back. All of this will be showcased in a fantastic exhibition.”

All the Best Lines, George Tiffin’s collection of movie-related quotes, anecdotes, is out now in paperback with a gorgeous cover photo of Marilyn on the set of There’s No Business Like Show Business (the hardback features Grace Kelly and Cary Grant on the cover instead.) A chapter entitled ‘I Just Want to Be Wonderful’ is dedicated to MM. All the Best Lines is available from The Works and other bookshops.

In August, I posted about a new Italian book focusing on Marilyn’s cinematic legacy, Marilyn Monroe Inganni. Fraser Penney – IM staffer and friend – has shared a preview with ES Updates.

Maurice Zolotow’s seminal 1961 biography has been released in Spanish, with an extensive photo section. Let’s hope it will be reissued in English as well, as it’s essential reading for any true fan. 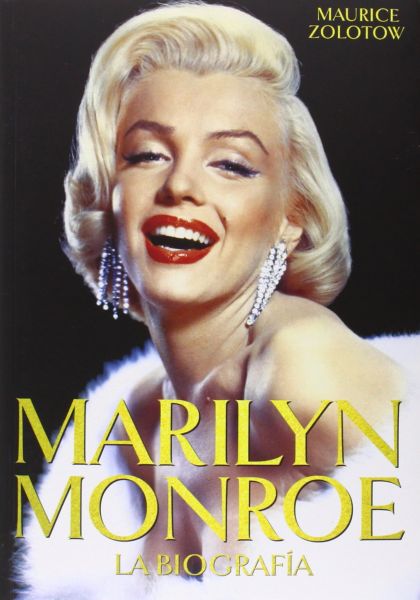 Another old favourite, Michael Conway and Mark Ricci’s The Films of Marilyn Monroe, was also reissued in Italy recently. Finally, if you’re interested in learning more about the history of Marilyn’s home studio, Peter Lev’s Twentieth Century-Fox: The Zanuck-Skouras Years is out now in paperback. And a new retrospective of Eve Arnold’s long career features Marilyn on the cover. 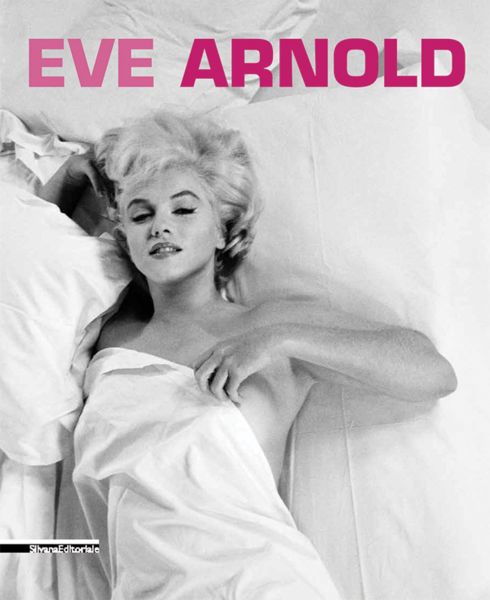 Although tame by today’s standards, Marilyn’s movies often fell foul of the rigid censorship code of the time. The Seven Year Itch was toned down to gloss over its theme of adultery, while the famous ‘skirt-blowing scene’, which garnered huge publicity, was cut to a minimum.

Even after its release, the film was considered risque. The Irish Examiner notes that posters featuring Marilyn’s windblown skirt were altered so that her thighs were entirely covered. And in Spain, another Catholic country, the same tactic was used.

‘I think they were doing it because they were afraid the local parish priest would close it down,’ said Dublin auctioneer Ian Whyte. 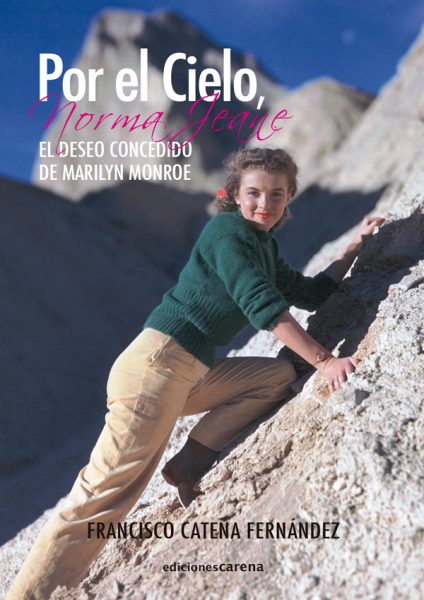 Marilyn Monroe’s native city, Los Angeles, was once part of Mexico, and her final home in the city was built, and decorated, in the style of an authentic villa. In 1962, a few months before her death, Marilyn visited Mexico and fell in love with its art and culture instantly.

The Spanish have always had a soft spot for Marilyn. Artist and writer Frederic Cabanas has published several books about his muse, including Marilyn in Spain.

Perhaps it’s not surprising, then, that some of the best, non-English books on MM have come from Spanish-speaking countries. In the last year, My Story has been published in Spanish; and two intriguing titles, Vintage ’62: Marilyn y Otros Monstruos, and Por el Cielo, Norma Jeane: El deseo concedido de Marilyn Monroe.

Por Cielo, Norma Jeane loosely translates as Norma Jeane in Heaven.  Francisco Catena Fernandez describes his novel as a meditation on life after death, and a love story. 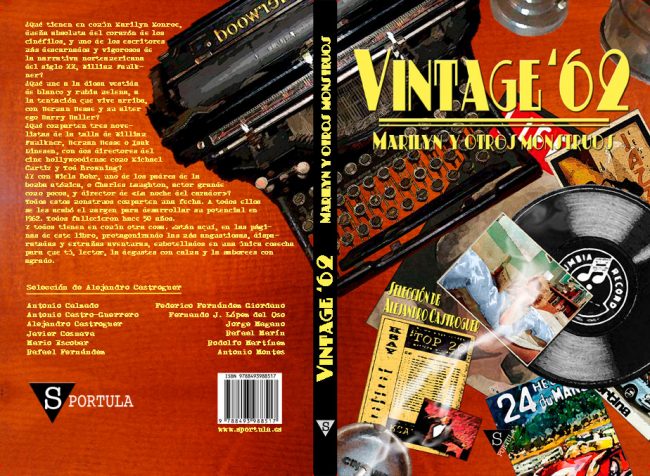 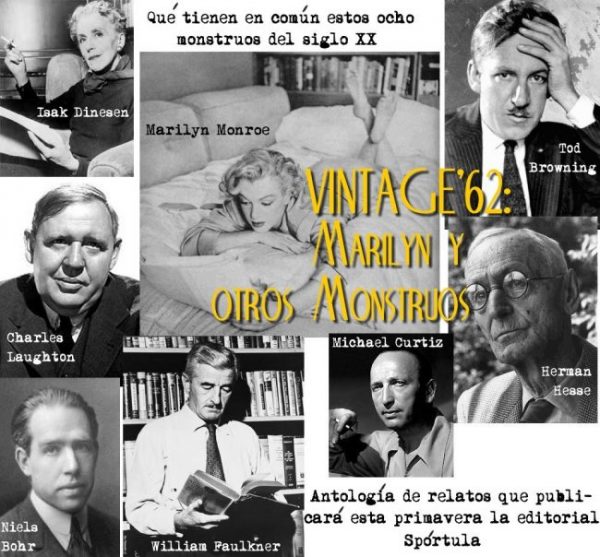 Vintage ’62 is an anthology of short stories by various authors, and its subtitle translates as Marilyn and Other Monsters. Its remit encompasses not just MM, but a selection of famous people who died in 1962, including Charles Laughton and Isak Dinesen, who both knew Monroe.

The stories featured include ‘Marilyn and the Invasion of the Body-Snatchers‘, by Mario Escobar; and ‘River of No Return‘, by Rafael Marin.

Writing for the Huffington Post, psychologist Romeo Vitelli considers a new study by Spanish psychiatrist Mercedes Fernandez-Cabana. Originally published in the medical journal, Crisis, the article speculates on what Marilyn’s personal writings, as collected in Fragments, may tell us about her possible suicidal intentions in the years leading up to her death.

But most of the writings date from the mid to late 1950s, and as far as we know, Marilyn left no suicide note when she died in 1962. These are Vitelli’s own thoughts on the investigation:

“Studying Fragments was made easier by the dates of the letters and notes left behind by Marilyn Monroe. Using the dated material as a timeline in the years leading up to Monroe’s death, Fernandez-Cabana and her colleagues were able to group the Fragments materials into four time periods ending in 1962. Statistical analysis showed a significant rise in health concerns, death issues and personal pronoun use over time. Also, the period just before her death showed a significant decrease in negative emotions, anxiety, and religious ideas.

Though there were no clear indications of suicidal intention in any of Marilyn’s Monroe’s writings, the notes written shortly before her death suggest a strong sense of isolation. The LIWC evidence does not reflect what has been typically found that depressed individuals but may indicate that her suicide death was an impulsive decision rather than a planned act.

In discussing Monroe’s death, Mercedes Fernandez-Cabana and her fellow authors avoided commenting on the elaborate theories that were raised about her possibly being murdered for political reasons. Also, the lack of any notes written in the critical few weeks leading up to Marilyn Monroe’s death means that important data may be missing from the final analysis.” 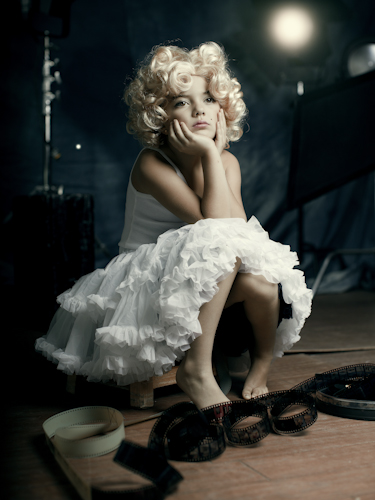 Photographer Olga Laris has photographed a group of lookalikes with a difference – they are children, impersonating past icons like MM, James Dean, and Audrey Hepburn, over at Spanish website BBMundo. 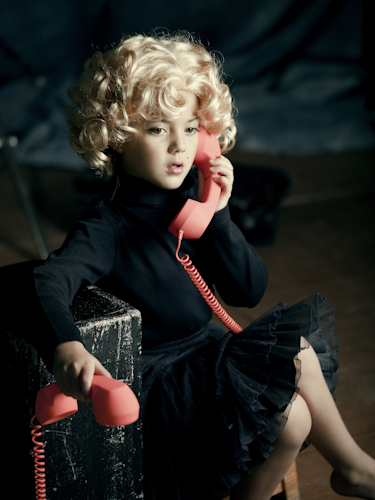 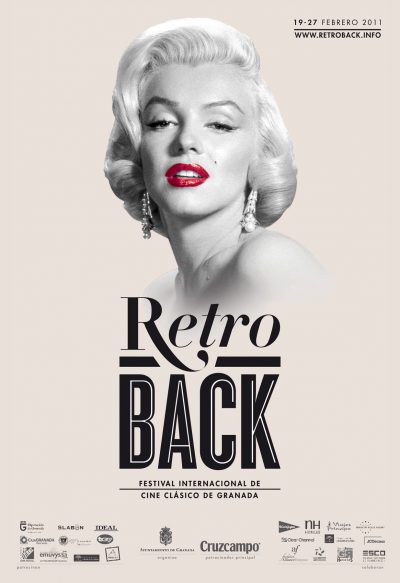 Spanish fans, don’t miss the Retroback Film Festival, with screenings of several Monroe classics, plus an exhibition from the Maite Minguez Collection.

“The largest collection of personal items, dresses, photographs, magazines, documents, etc, related to Marilyn Monroe, on the personal and private level as well as on the professional level, comes to Granada by the hand of the collector Maite Minguez.

Outfits she wore in films such as The Seven Year Itch, The Prince and the Showgirl, How to Marry a Millionaire, Gentlemen Prefer Blondes and Bus Stop; her own dresses and also dresses she wore for unforgettable photo sessions; objects as personal as a lipstick or the ticket to President Kennedy’s birthday celebration; personal photographs of her family, her childhood and her first marriage; magazines of which she has been the cover girl, not just during her lifetime but also from the moment the legend was born up through today. All with the idea of allowing festival goers to explore even the most hidden corners of the legend. 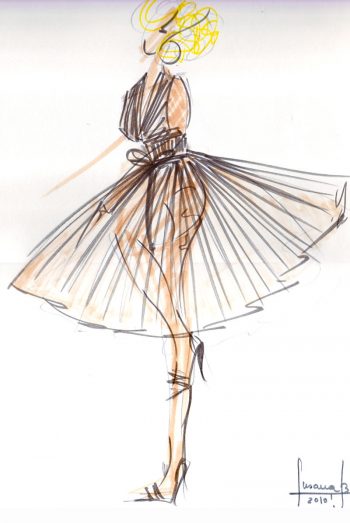 “The street known as La Carrera del Genil will be dressed in a red carpet, to show us the way to the main venue, Teatro Isabel La Católica. And along the way we will be escorted by a series of images displayed in the street, featuring the great actors who accompanied Marilyn Monroe during her career.”

“The Granada-born designer Susana Poyatos has designed -exclusively for Retroback 2011- three outfits with the originals forms of three of the most well-known dresses from Marilyn Monroe films, but she has reinterpreted them using new materials.”