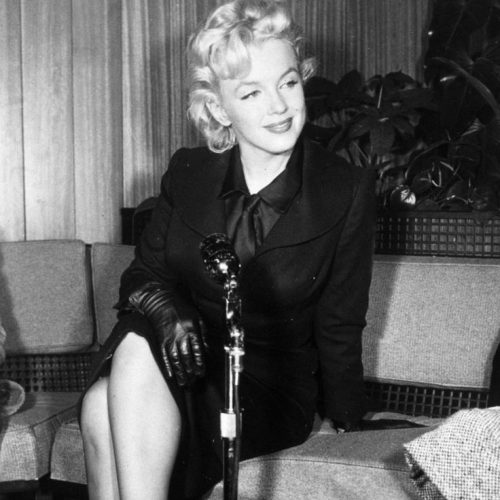 Marilyn in Manhattan author Elizabeth Winder has written an excellent article for Marie-Claire about Marilyn’s escape to New York and triumphant battle with Hollywood. It’s well worth reading, and a great preview of the book. (However, as MM: A Day in the Life author April VeVea points out, Marilyn wasn’t, as is sometimes claimed, the first woman in Hollywood to start her own production company – the Talmadge Sisters, Rita Hayworth and Ida Lupino all preceded her.)

“Years ahead of her time, and dead at the age of 36 in 1962, Monroe wouldn’t live to see the changes she made possible. But her reach went far beyond the machinations of Hollywood and shifted the way women around the world viewed themselves: Bra-less and never in girdles, Monroe didn’t apologize for her raw sensuality and frankly admitted to posing nude in the past; she’d been a penniless starlet and whose business was it anyway? At the same time, she wasn’t afraid to appear ‘unsexy.’ She loved being photographed in grimy boas and ripped fishnets, or puffy-eyed and makeup free, hair tangled from hours of fitful sleep. Monroe wanted to express herself, no matter the risk.”

A rather provocative article, headlined ‘Marilyn Monroe Started Sexual Revolution’, has appeared at The Inqisitr. It’s an interesting proposal, but unfortunately the content is somewhat ill-informed.

Firstly, none of the quotes attributed to Marilyn can be substantiated. They are all quotes which have only appeared online in recent years. None of them can be traced back to an interview or reputable biography.

Here’s a better example, from her last interview in 1962:

“I think that sexuality is only attractive when it’s natural and spontaneous. This is where a lot of them miss the boat. And then something I’d just like to spout off on. We are all born sexual creatures, thank God, but it’s a pity so many people despise and crush this natural gift. Art, real art, comes from it, everything.”

Secondly, Marilyn’s much-vaunted ‘affair’ with John F. Kennedy has been wildly exaggerated. The best evidence suggests that it was at most a weekend fling. And her last phonecall was not to JFK.

In private, Marilyn was perhaps more sexually liberated than most women were generally in her lifetime. But among other Hollywood stars, she wasn’t especially promiscuous.

Where she was arguably more radical is in how she expressed her sexuality in public life. The Inquisitr rightly states the revelation of her nude calendar, and Marilyn’s refusal to disown it, as a turning point in her career.

She was America’s greatest post-war sex symbol, which is all the more remarkable since she came to prominence in an era when women’s sexual freedoms were being curtailed.

In her first true star vehicle, Niagara, Marilyn played a ‘femme fatale’ with fierce, threatening sexuality. However, her bosses at Twentieth Century Fox subsequently placed her in comedic, ‘dumb blonde’ roles, in an attempt to neutralise her allure.

Despite being forced to play a stereotype, Marilyn managed to poke fun at her image, presenting sex in a way seldom seen before. Unlike the vamps who preceded her, Marilyn’s sexuality seemed both natural and joyous.