There are so many photos of Marilyn reading, you could fill a book with them. So it’s not surprising this classic 1951 photo of Marilyn reading at home was selected to grace the cover of the newly-published The Hollywood Book Club: Reading With the Stars. This lovely hardback, measuring a compact 21 cm squared and with text by Steven Rea, also features black-and-white images of some of Marilyn’s friends and co-stars reading (including Sammy Davis Jr, Lauren Bacall, Jack Benny, Marlon Brando, Bette Davis, Dorothy Dandridge, Ginger Rogers, Claudette Colbert and many more.)

Shirley MacLaine is also pictured reading in What a Way to Go! (1964), a film originally planned for Marilyn. A selection of photos from the book was posted in the Evening Standard this week. It would make a great stocking filler for the cinephile/bibliophile in your life – or if you can’t wait, just treat yourself!

One of Seward Johnson’s ‘Forever Marilyn’ sculptures is currently greeting visitors to Reading Public Museum in Pennsylvania. (As reported last month, another of these statues is now in the foyer of the R.W. Norton Gallery in Shreveport, Louisiana.) And it’s not the first time an iconic Monroe image has come to Reading. Back in 2012, a screening of My Week With Marilyn at the Goggleworks cinema was accompanied by a guest appearance from Monroe collector Gene London, who brought along Marilyn’s dress from The Prince and the Showgirl (one of several copies made, as she wore the same dress for most of the movie.)

Thanks to Eiji Aoki 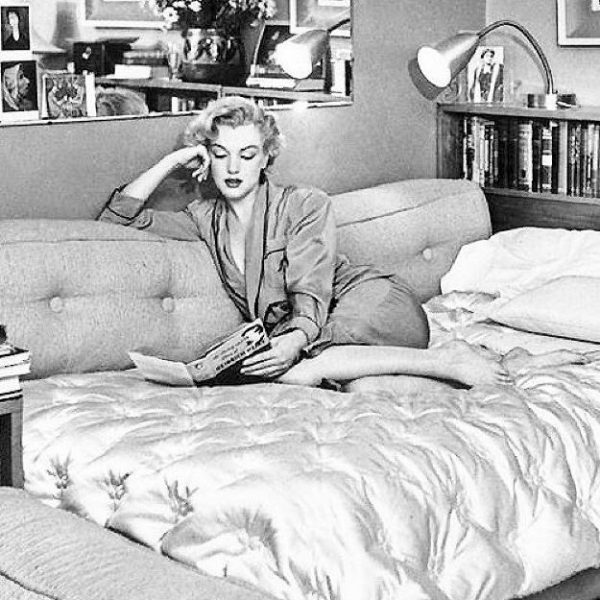 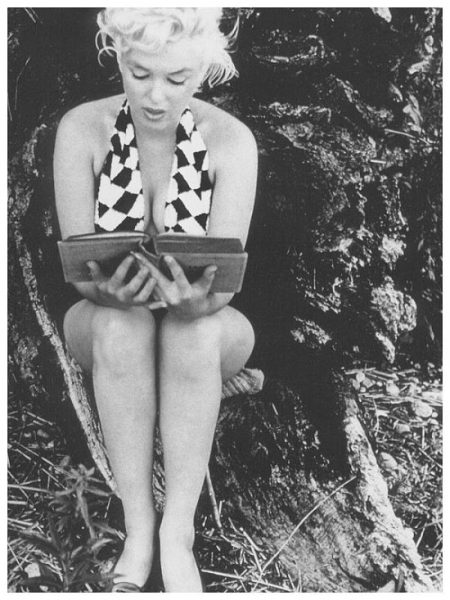 Vintage website Flashbak has compiled transcripts of Marilyn’s poetry, as well as a list of the 430 books she owned (first posted here on ES Updates, of course!) They have also included a quote from the English novelist Jeannette Winterson about Eve Arnold’s famous photos of Marilyn reading Ulysses.

“This is so sexy, precisely because it’s Marilyn reading James Joyce’s Ulysses. She doesn’t have to pose, we don’t even need to see her face, what comes off the photo is absolute concentration, and nothing is sexier than absolute concentration. There she is, the goddess, not needing to please her audience or her man, just living inside the book. The vulnerability is there, but also something we don’t often see in the blonde bombshell; a sense of belonging to herself. It’s not some Playboy combination of brains and boobs that is so perfect about this picture; it is that reading is always a private act, is intimate, is lover’s talk, is a place of whispers and sighs, unregulated and usually unobserved. We are the voyeurs, it’s true, but what we’re spying on is not a moment of body, but a moment of mind. For once, we’re not being asked to look at Marilyn, we’re being given a chance to look inside her.” 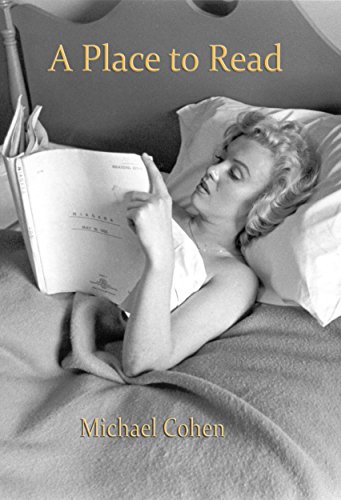 Photographs of Marilyn reading are quite common, and author Michael Cohen has chosen this picture – taken by Jock Carroll, while Marilyn was lying in bed and reading her script for Niagara in her hotel suite during the summer of 1952 – for the cover of A Place to Read: Life and Books, a recently-published collection of essays.  The title essay includes a short passage about the photo:

“The photo might be a modern version of the subject of the woman reading: like Fragonard’s young lady reading she lies propped on pillows; like the readers of John Sloan, Giovanni Boldini, and Robert Delaunay, she has no clothes on (though discreetly covered by sheet and blanket). In all such scenes a woman is taken out of her surroundings, is oblivious of them, no longer in a physical place but projected into a place of the imagination, a story space. As reader she enters the text, and its adventures are happening to her. But here the movement from the place of reading into the reading is even more pronounced: Marilyn Monroe projects herself into a text written to invite her. She is thinking about how she will be the character in the story. As she reads the hotel room recedes, with its harsh light, rough blanket, and intrusive photographer. She will not only enter the story in imagination but will enter physically into another level of the story, into a dramatic realisation of it, and she is thinking both about how the story appeals but also about how she will play it.”

You can learn more about Jock Carroll’s photos of MM in his 1996 book, Falling For Marilyn: The Lost Niagara Collection.

WFMZ-TV reports on a screening of My Week With Marilyn last night at GoggleWorks in Reading, Pennsylvania, was followed by appearances from local film historian Robert P. Metzger (author of the 1988 book, Reagan: American Icon), and Monroe collector Gene London, who brought along a white dress designed as a costume for Marilyn in The Prince and the Showgirl.

‘”Everything about Marilyn was special. And Ms. Williams captured her,” said Gene London.

“There are times in the movie, when I– who am super critical about Hollywood when I have to be– I look at her and she is Marilyn,” said London, “And it’s breathtaking.”

“My Week with Marilyn” is based on the time Marilyn Monroe was working on the movie “The Prince and the Showgirl.”  In it she wears a dress that Gene London now owns.

“You can see by this dress that Marilyn’s figure was ample,” said London pointing to the white gown. “She’s very curvy which was the style then, no longer the style now.”

London said he had his eye on this dress when he was buying other costumes from a man in Wisconsin.

“The one thing he wouldn’t give me was this dress,” said London, “I wanted it the most of all of them.  He said nope, that’s going to my children.”

“I adored the way she acted,” said London about Monroe. “I adore the way she sang ‘Diamonds are a Girl’s Best Friend.’  I just love her.  It’s hard to explain why. I just do.”‘

Marilyn owned over 400 books. I have compiled a complete catalogue here

And here is a shorter list, of my own personal picks:

1) Books by Albert Camus (The Fall, The Rebel)
2) Invisible Man by Ralph Ellison
3) The Prophet by Kahlil Gilbran
4) The Last Temptation Of Christ by Nikos Kazantzakis
5) On The Road by Jack Kerouac
6) Sons And Lovers by DH Lawrence
7) Plays by Sean O’Casey
8 ) Plays Of Clifford Odets (Golden Boy, Clash By Night)
9) Plays by Eugene O’Neill (Long Day’s Journey Into Night, Anna Christie)
10) The Little Engine That Could by Piper Watty
11) Plays by George Bernard Shaw
12) Anything by John Steinbeck
13) The Roman Spring Of Mrs Stone by Tennessee Williams
14) Plays Of Tennessee Williams
15) Tender Is The Night by F. Scott Fitzgerald
16) Books by Thomas Wolfe (The Story Of A Novel, Look Homeward Angel)
17) Winesburg, Ohio by Sherwood Anderson
18) The Adventures Of Huckleberry Finn by Mark Twain
19) Short Novels Of Colette
20) Goodness Had Nothing To Do With It by Mae West
21) Madame Bovary by Gustave Flaubert
22) Nana by Emile Zola
23) An American Tragedy by Theodore Dreiser
24) Brighton Rock by Graham Greene
25) Anything by Dylan Thomas
26) The Sound And The Fury/As I Lay Dying, by William Faulkner
27) The Dubliners by James Joyce
28) Poems by Emily Dickinson
29) Anything by Dorothy Parker
30) Of Human Bondage by W. Somerset Maugham
31) The Poetry Of Shelley
32) The Poetry Of William Blake
33) The Poetry Of Edna St Vincent Millay
34) The Poetry And Plays Of Federico Garcia Lorca
35) The novels of Fyodor Dostoevsky (Crime And Punishment, The Brothers Karamazov)
36) The novels of Willa Cather (My Antonia, A Lost Lady)
37) The novels of Carson McCullers (eg Ballad Of The Sad Café)
38) The Little Disturbances Of Man by Grace Paley
39) Mr Roberts by Joyce Cary
40) The Thinking Body by Mabel Elsworth Todd
41) Letters To A Young Poet by Rainer Maria Rilke
42) Songs For Patricia by Norman Rosten
43) Focus by Arthur Miller
44) Plays by Arthur Miller
45) Leaves Of Grass by Walt Whitman