Prism, a play by Terry Johnson (author of Insignificance), first opened in London in 2017, starring the much-loved British actor Robert Lindsay as an elderly Jack Cardiff, looking back on his glory days as a cinematographer, and the many beautiful women he worked with (including Marilyn, in The Prince and the Showgirl.) This autumn, Prism will be touring UK theatres with Lindsay reprising his role, and Tara Fitzgerald (Brassed Off, Game of Thrones) playing the assistant with whom Cardiff shares his memories.

You can read a full synopsis here, and sample reviews from the London production here. If you’re planning on seeing Prism, it’s playing from October-November in Birmingham, Richmond, Edinburgh, Chichester, Guildford, Cambridge and Malvern – more info on dates and venues here.

Thanks to Warren at Marilyn Remembered

Prism, Terry Johnson’s new play at the Hampstead Theatre about the twilight years of Marilyn’s favourite cameraman Jack Cardiff, is enjoying  positive reviews. Elsewhere in London, Johnson’s most famous work – Insignificance – will be revived next month at the Arcola Theatre, with his daughter, Alice Bailey-Johnson, playing the Monroe-inspired leading lady.

“Gorgeous photographs of Marilyn Monroe, Audrey Hepburn and Marlene Dietrich hang around the garage, and an expensive camera is held up on a stand. There’s a problem though; the device doesn’t work, as it’s missing a vital component, the prism. The prism is a miracle of light, and an object that splits this light into a rainbow of three colours, creating a Technicolor fantasy.

Written and directed by Terry Johnson, the play cleverly weaves together two time periods: the Fifties and present day. Despite not much happening in terms of dramatic action, the text is full of light-hearted motifs and one-liners, keeping the audience engaged. However, Prism also packs a real punch, as it deals with an illness currently effecting a lot of people: dementia.

Suffering from the disease, Jack doesn’t know who he is or who his family are. His son Mason (Barnaby Kay), has requested he write a memoir, however Jack only seems to remember the past without its glory. Riddled with anxiety over the task, he is supported by a carer (Rebecca Night). As Jack, Robert Lindsay gives a masterclass in stage acting. The comedy lands at all the right points and his full embodiment of every Cardiff trait is surreal to watch.” – Alistair Wilkinson, Broadway World

“Cardiff’s memories of his famous subjects – Katharine Hepburn and Humphrey Bogart on The African Queen, Marilyn Monroe accompanied by her husband Arthur Miller on The Prince and the Showgirl – glimmer in the air … There’s strong support too from Claire Skinner who gets to impersonate Katharine Hepburn, and from Rebecca Night who is transformed from carer into Monroe and Lauren Bacall. But it’s Lindsay’s night.” – Sarah Crompton, What’s On Stage

“Lucy (Rebecca Night), who’s been hired as Jack’s carer and typist, doesn’t have much of a clue about how to fulfil either role, though she does eventually prove to have a kind of natural empathy for him … Night is also reborn as a shimmering, statuesque Marilyn Monroe, to re-enact an earlier scene she shared with Cardiff as Lucy when the ailing cinematographer imagined her as the Blonde Bombshell on his own casting couch. Barnaby doubles as Monroe’s affronted husband Arthur Miller.” – Adam Sweeting, The Arts Desk

“When Robert Lindsay’s concertedly serene, quietly agitated Jack holds up the refractive optical marvel that was a key component of his adventures in colour – ‘God’s eye’ – it’s hard not to feel a frisson of wonder. Our response to the way the domestic scene that greets him in his converted, memorabilia-crammed Buckinghamshire garage is twisted by his diseased mind into memories of yore is more complex, however. Johnson invites some hesitant laughter as Cardiff talks funny, imagines his local boozer has gone missing and fleetingly confuses his carer with Monroe and his son with Arthur Miller, reliving old conversations. Yet the piece is suffused with real pain, the family torn between despair and indulgence.” – Dominic Cavendish, Telegraph

“The problem is that because Cardiff worked so much with the famous, the play doesn’t inspire the immediate empathy of a work like Florian Zeller’s The Father, with its more mundane hero. If it finally touches our hearts, it is because it reveals the cost to those close to Cardiff of his final decline and because of its recognition that no life achieves a perfect narrative arc, and is instead more akin to shooting a film than watching one.

Lindsay is amazing to watch. He evokes the casual charm that made Cardiff magnetic to the women he worked with as well as the professional obsessiveness that led him to experiment with prisms and seek to reproduce the textures of a Vermeer or Renoir on screen. Above all, Lindsay’s performance has a humanity that suggests Cardiff’s cinematic memories are accompanied by a spasmodic grasp of reality.

Claire Skinner shifting between Cardiff’s wife and his idealised Katharine Hepburn, Rebecca Night as the carer who becomes his memorialised Marilyn Monroe and Barnaby Kay as the son who turns into Humphrey Bogart and Arthur Miller, also show the pangs of becoming part of someone else’s disordered dreams.” – Michael Billington, The Guardian

“The structure is artful. Rebecca Night reappears as a lustrous Marilyn Monroe, in order to re-enact, word for world, an earlier scene with Jack in which he’d confused his carer, Lucy, with the screen goddess, draped on his casting couch. (Kay is a pompously affronted Arthur Miller). These lapses between precarious present and distorted past take us into the jungle of Jack’s ailing mind, while the doubling and tripling bring home the ache of being mistaken for one of the luminaries in his thronging cinematic memory-bank.” – Paul Taylor, The Independent 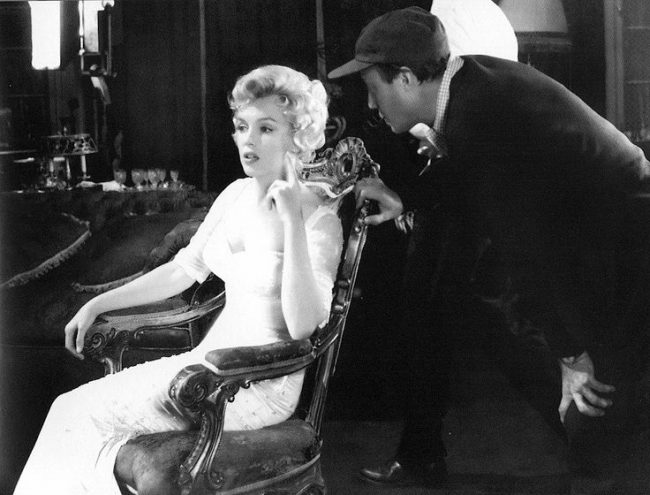