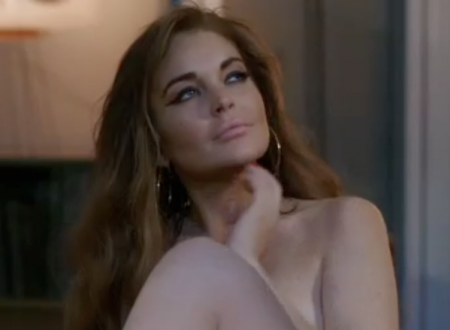 Most Monroe fans heave an exhausted sigh each time comparisons to Lindsay Lohan are made. For us, these parallels arise simply because Lindsay is perhaps the world’s most famous MM fan. And of course, there’s nothing wrong with that.

Most recently, I saw her reading her idol’s own words in Love, Marilyn. Checking through my tags, I’m surprised to find that Lindsay has now produced no less than 22 posts. The Canyons will be screened at the Lincoln Center (where Arthur Miller’s Marilyn-influenced play, After the Fall, was the inaugural theatrical production in 1964) on July 29th, reports IndieWire.

But others see them both mainly as troubled starlets, when in fact they are different in many ways. Lindsay’s career, thus far, is that of a former child star who has struggled to make the transition to adult roles. She is undoubtedly gifted, though, and I wish her all the best, both personally and professionally.

Marilyn, on the other hand, maintained her star status, despite private turmoil, for well over a decade, until her untimely death: and, half a century on, her movies remain among the most popular of all time.

Paul Schrader, director of Lindsay’s latest film, The Canyons (watch the trailer here) addresses – and exploits – these comparisons in an op-ed for Film Comment. It’s an interesting piece,  though I can’t agree with him that Lindsay has ‘more natural talent’ than Marilyn did (or that she was protected by the studios; or that she sought prestige merely to be accepted.) No disrespect to Lohan, I just think he’s – fatally – under-estimating Monroe.

“While preparing and directing The Canyons I was reading James Goode’s book The Making of The Misfits, and I was struck by the similarities between Marilyn Monroe and the actress I was working with, Lindsay Lohan. (I wasn’t the only one so struck. Stephen Rodrick, a writer for The New York Times Magazine who was on set with us, titled his article about the film ‘The Misfits’, which appeared on the cover with the line: “This is what happens when you cast Lindsay Lohan in your movie.” Not even the Times is immune to the hurricane force of the LiLo phenomenon.)

Similarities? Tardiness, unpredictability, tantrums, absences, neediness, psychodrama—yes, all that, but something more, that thing that keeps you watching someone on screen, that thing you can’t take your eyes off of, that magic, that mystery. That thing that made John Huston say, I wonder why I put myself through all this, then I go to dailies.

Monroe and Lohan exist in the space between actors and celebrities, people whose professional and personal performances are more or less indistinguishable. Entertainers understand the distinction. To be successful, a performer controls the balance between the professional and personal, that is, he or she makes it seem like the professional is personal. It is the lack of this control that gives performers like Monroe and Lohan (and others) their unique attraction. We sense that the actress is not performing, that we are watching life itself. We call them ‘troubled,’ ‘tormented,’ ‘train wrecks’—but we can’t turn away. We can’t stop watching. They get under our skin in a way that controlled performers can’t.

I think Lohan has more natural acting talent than Monroe did, but, like Monroe, her weakness is her inability to fake it. She feels she must be experiencing an emotion in order to play it. This leads to all sorts of emotional turmoil, not to mention on-set delays and melodrama. It also leads, when the gods smile, to movie magic. Monroe had the same affliction. They live large, both in life and on screen. This is an essential part of what draws viewers to them.

But LL is not MM. The differences are even more interesting than the similarities. Those differences are marked by the almost 50 years that separate Monroe and Lohan. Over that time our notions of acting, stardom, celebrity, and talent have fundamentally changed. Marilyn had two things going for her that Lindsay doesn’t. She was the product of a culture that mandated public responsibility. An acting gift, good looks, and a zesty personality only got you so far. To be taken seriously one had to appear serious: study your craft, be mentored, read literature, respect your creative elders, marry a playwright, get the support of an established theater group or studio. To receive the system’s rewards—fame, money—you play-acted by the system’s rules. And Monroe did.

Second, Monroe was a product of the studio system. The studios used their influence in the media and the courts to protect their stars. Damage was controlled and discipline en-forced. It’s inconceivable that Monroe would have faced the legal troubles that have beset Lohan over the last five years. A star’s difficulties only became public when they were impossible to contain; until then, he or she was protected.”

Actress Megan Fox has been making headlines this week after a baffling interview with writer Stephen Marche, for Esquire magazine, in which he bizarrely likened her to an ‘Aztec warrior’. The piece has since been widely lampooned across the blogosphere.

Elsewhere in the article, Megan (yet again) explained why she decided to remove her Marilyn Monroe tattoo. At this point, she brought poor Lindsay Lohan (who has already suffered enough bad press to last many lifetimes) into the discussion, and everything went pear-shaped.

“She holds out her right arm to show me her tattoo of Marilyn Monroe. All that remains of Marilyn is a few drops of black against skin that is the color the moon possesses in the thin air of northern winters. She decided to get it removed, and after a single treatment the sex symbol of another age is barely recognizable. ‘I feel like I willed it be gone,’ Fox says. ‘They told me it was going to take six sessions and it’s nearly gone in one.’

But she was a great actress, a great icon, a figure of power.

‘She wasn’t powerful at the time. She was sort of like Lindsay. She was an actress who wasn’t reliable, who almost wasn’t insurable…. She had all the potential in the world, and it was squandered,’ she says, curled defensively on the sofa. ‘I’m not interested in following in those footsteps.’

‘Ava Gardner. She had power. She was a broad. She got what she wanted and said what she needed.’

Ava Gardner did have control, over herself and others. But even as Fox says the name, a self-aware smile plays over those ultrasymmetrical lips. Self-awareness is her most attractive feature.

It’s not like Ava Gardner ended that well, either.”

Megan responded to the article on her Facebook page:

“I attempted to draw parallels between Lindsay and Marilyn in order to illustrate my point that while Marilyn may be an icon now, sadly she was not respected and taken seriously while she was still living.

Both women were gifted actresses, whose natural talent was lost amongst the chaos and incessant media scrutiny surrounding their lifestyles and their difficulties adhering to studio schedules etc.

I intended for this to be a factual comparison of two women with similar experiences in Hollywood. Unfortunately it turned into me offering up what is really much more of an uneducated opinion.”

However, in contrast to Megan’s comments, MM was Hollywood’s most bankable star for much of her career. Her personal problems were not widely known until after her death.

Nonetheless, the comparison has been seized upon by the media, eager for any dirt on the troubled Lindsay. Another writer, Stephen Rodrick, made the Monroe comparison last week in an article about Lohan, reports the Huffington Post:

“‘There’s talent in there,’ Rodrick, who describes Lohan as ‘fragile’ and a ‘tornado’,explains to the NYT. ‘She has that undefinable It quality. You can see it at certain moments in the film. The frustrating/tragic thing, and Lindsay would be the first to admit it, is getting that talent out of her over the past few years has been nearly impossible. That’s why I called the piece The Misfits, after Marilyn Monroe’s last film, one that [Paul] Schrader and the crew were constantly talking about on set. You can’t argue that Lindsay has the talent or resume of Monroe, but there is that same feeling of talent slipping away, perhaps permanently.'”

“It bothers me to no end that these celebrities have to drag Marilyn’s character down with their loose comparisons and constant ‘channeling’ of her image. Marilyn wasn’t cheap, but her image is often sold that way, and it’s not because of her own doing – it’s because of the cheap mockery. These users take no care to respect Marilyn as a person while poorly mimicking her or even just talking about her in order to seem relevant. Lindsay Lohan, Megan Fox, Lady Gaga, Courtney Stodden – all of these women drag Marilyn’s memory through the mud when they reduce her to a visual icon, re-post fake quotes to millions of fans, and paint her as nothing more than a tragic victim of Hollywood. Any comparisons drawn between Marilyn and any of these people should be left at the fact that they are using her for visual inspiration and failing to recreate any of her natural beauty or class.”