Artist Philippe Pareno‘s 2012 video installation,, set in Marilyn’s Waldorf Astoria Hotel suite is now on display as part of an exhibition, ‘Anywhere, Anywhere Out of the World’, at the Palais de Tokyo in Paris, reports The Guardian‘s Adrian Searle:

“Why the tears? My own moment came when watching Parreno’s 2012 film Marilyn. Monroe’s voice, recreated by computer, takes us on a tour of the hotel suite where she lived in the late 1950s. What Marilyn sees, the camera sees. We watch through her eyes. Sunlight falls into the room. Rain beats at the window. Sometimes the camera swerves along with Marilyn’s frantic glances, her growing sense of hysteria and entrapment. Her eyes snag on the corners of things, the light glancing cruelly on polished surfaces. The studied normality of the room becomes a prison. The cushions, too perfectly arranged at either end of a sofa, look like a dumb rebuke. Her solitude seems terrible. The telephone rings but goes unanswered.

Towards the end, the camera retreats from the window, gliding between the occasional tables, the slipper chairs, the lilies in the vase. The camera’s tracks appear, then some bulky electronic equipment, as we back off, revealing the room as a movie set with no one in it. As the film ends, lights go up on the other side of the screen where the film has been projected, to reveal a huge snowdrift beyond. The temperature plummets. The sound of the rain we heard in the film is unabated.

This moment is somehow intensely moving. We are in a set too, just as Marilyn was. What is this subterranean drift of real snow in the Palais de Tokyo’s basement? Ice in the soul? Death? Are we in Marilyn’s mind or is she in ours? I begin to notice other piles of snow around the auditorium, like the shovelled-up slush you see on winter New York sidewalks.

When you buy a ticket for the show you get given a DVD of Marilyn. It can only be played once, because the dvd erases itself as you watch it, leaving you with a memory of something seen that can’t be recaptured. The DVD is called Precognition.”

A selection from Yury Toroptsov’s ‘Marilyn and I’ photo series will be on display at Renoma & Komplex store in Paris alongside the photos of Bernard of Hollywood in a show entitled ‘Seule’ (‘Alone’) dedicated to MM. Opening reception on Thursday, May 10, running through to July 25.

The Tagliatella Galerie, Paris, is currently hosting an exhibition featuring Lawrence Schiller’s photos of Marilyn on the set of Something’s Got to Give, and depictions of the star in Pop Art, running through to June 30.

Marilyn and I, a 2010 project by photographer Yury Toroptsov, featuring MM fans worldwide posing with a dress she owned, is the subject of a new exhibition, opening at Le Bon Marche Rive Gauche department store in Paris on October 29. A bilingual catalogue will also be published, including a preface by actress Catherine Deneuve. 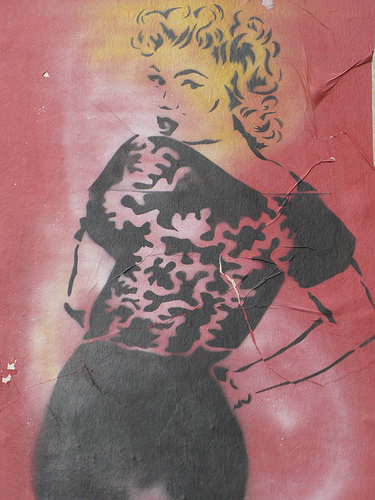