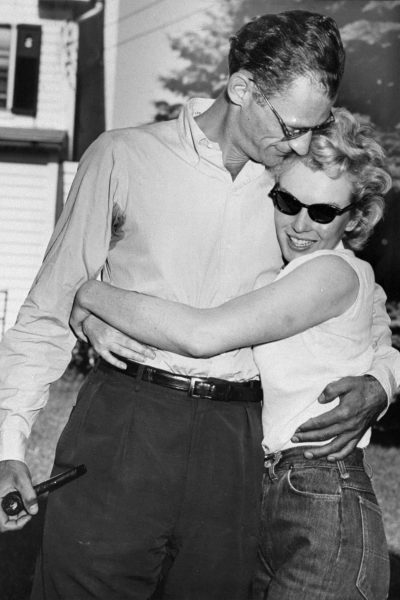 The literary magazine Paris Review has posted a 1966 interview with Arthur Miller, where he talks about his relationship with Marilyn, and After the Fall.

“MILLER: I think Strasberg is a symptom, really. He’s a great force, and (in my unique opinion, evidently) a force that is not for the good in the theater. He makes actors secret people and he makes acting secret, and it’s the most communicative art known to man; I mean, that’s what the actor’s supposed to be doing … The problem is that the actor is now working out his private fate through his role, and the idea of communicating the meaning of the play is the last thing that occurs to him. In the Actors Studio, despite denials, the actor is told that the text is really the framework for his emotions … This is Method, as they are teaching it, which is, of course, a perversion of it, if you go back to the beginning. But there was always a tendency in that direction.

INTERVIEWER: What about Method acting in the movies?

MILLER: Well, in the movies, curiously enough, the Method works better. Because the camera can come right up to an actor’s nostrils and suck out of him a communicative gesture; a look in the eye, a wrinkle of his grin, and so on, which registers nothing on the stage.

INTERVIEWER: Do you think the push toward personal success dominates American life now more than it used to?

MILLER: I think it’s far more powerful today than when I wrote Death of a Salesman. I think it’s closer to a madness today than it was then. Now there’s no perspective on it at all.

INTERVIEWER: Would you say that the girl in After the Fall is a symbol of that obsession?

MILLER: Yes, she is consumed by what she does, and instead of it being a means of release, it’s a jail. A prison which defines her, finally. She can’t break through. In other words, success, instead of giving freedom of choice, becomes a way of life.

INTERVIEWER: Do you feel in the New York production that the girl allegedly based on Marilyn Monroe was out of proportion, entirely separate from Quentin?

MILLER: Yes, although I failed to foresee it myself. In the Italian production this never happened; it was always in proportion. I suppose, too, that by the time Zeffirelli did the play, the publicity shock had been absorbed, so that one could watch Quentin’s evolution without being distracted.

INTERVIEWER: What do you think happened in New York?

MILLER: Something I never thought could happen. The play was never judged as a play at all. Good or bad, I would never know what it was from what I read about it, only what it was supposed to have been.

INTERVIEWER: Because they all reacted as if it were simply a segment of your personal life?

INTERVIEWER: Could this question of timing have affected the reaction here to After the Fall?

MILLER: The ironic thing to me was that I heard cries of indignation from various people who had in the lifetime of Marilyn Monroe either exploited her unmercifully, in a way that would have subjected them to peonage laws, or mocked her viciously, or refused to take any of her pretensions seriously. So consequently, it was impossible to credit their sincerity.

INTERVIEWER: Was it the play, The Crucible itself, do you think, or was it perhaps that piece you did in the Nation—’A Modest Proposal’—that focused the Un-American Activities Committee on you?

MILLER: Well, I had made a lot of statements and I had signed a great many petitions. I’d been involved in organizations, you know, putting my name down for fifteen years before that. But I don’t think they ever would have bothered me if I hadn’t married Marilyn. Had they been interested, they would have called me earlier. And, in fact, I was told on good authority that the then chairman, Francis Walter, said that if Marilyn would take a photograph with him, shaking his hand, he would call off the whole thing. It’s as simple as that. Marilyn would get them on the front pages right away.”