Phil Stanziola, who passed away recently, worked as a press photographer in New York, the Daily News reports. On September 9, 1954, Marilyn Monroe arrived in NYC to film exterior scenes for The Seven Year Itch. Over the next ten days, she posed for the Ballerina sitting at Milton Greene’s studio on Lexington Avenue; undertook numerous interviews and photo shoots, and hosted a press party at the St. Regis Hotel; took in Broadway shows, and dined out with husband Joe DiMaggio; and shot the movie’s iconic ‘subway scene’. With such a frantic schedule, it’s not surprising to see her kicking off her shoes in her hotel suite for Stanziola’s camera.

Robert Frank, who was considered one of the most important photographers of all time, has died aged 94. Born in Switzerland, he moved to the United States in 1947. Perhaps his most famous work of photojournalism was a 1958 book, The Americans. Frank became an avant-garde filmmaker, capturing beatnik culture in Pull My Daisy (1959); and he also shot the cover of the Rolling Stones’ 1972 album, Exile On Main St.

Although Frank never photographed Marilyn, he shot these images of a child on the beach in Wellfleet, Massachusetts, reading the front page of the New York Daily News, headlined ‘Marilyn Dead’, while his family appears unconcerned, in August 1962. The first photo was featured in a 2004 exhibition at the Brooklyn Museum, I Wanna Be Loved By You: Photographs of Marilyn Monroe from the Leon and Michaela Constantiner Collection. Robert Frank died at home in Nova Scotia on September 9, 2019. 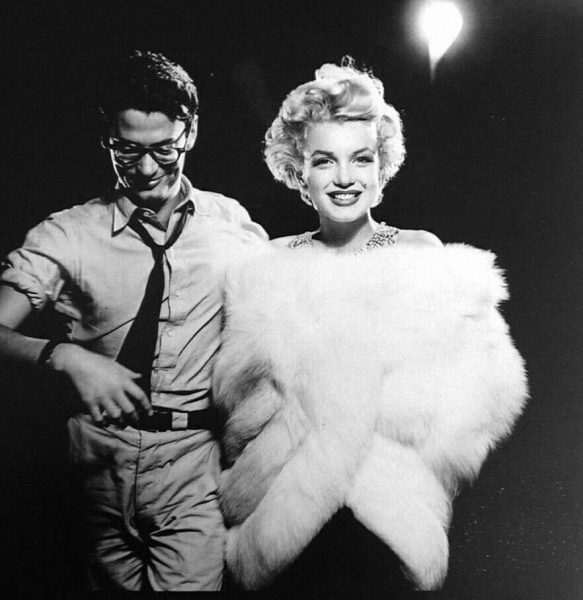 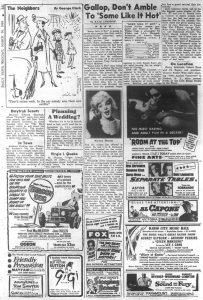 The release of The Misfits on February 1, 1961 – exactly fifty-five years ago this week – was overshadowed by the recent death of Clark Gable, and Marilyn’s divorce from Arthur Miller. Nonetheless, one of the most favourable reviews came from Kate Cameron, critic for the New York Daily News, and has been republished in full.

“Arthur Miller sang a sweet swan-song to his ex-wife, Marilyn Monroe, in The Misfits. His written tribute describes her as a beautiful, beloved and ‘loving, sweetly sentimental woman with an emanating lost lady’ aura. The story is prophetic when the song, gay through most of the action, goes into a minor key, as if the author were aware that his love was slipping away from him …

Gable has never done anything better on the screen, nor has Miss Monroe. Gable’s acting is vibrant and lusty, hers true to the character as written by Miller.

It is, I believe, of finer quality and of greater dramatic interest than any American product released last year … The screen vibrates with emotion during the latter part of the film, as Marilyn and Gable engage in one of those battles of the sexes that seem eternal in their constant eruption …”

While some highbrow critics were slow to warm to Marilyn’s talent, Kate Cameron was one of her early champions. Here is a selection of her comments:

“Marilyn Monroe and David Wayne play their roles well, the former representing a successful contestant in the ‘Mrs America’ beauty pageant, the latter as her disgruntled husband.” – We’re Not Married (1952)

“Ginger and Cary are assisted in this amusing nonsense by Marilyn Monroe, who can look and act dumber than any of the screen’s current blondes.” – Monkey Business (1952)

“Betty Grable, Lauren Bacall and Marilyn Monroe give off the quips and cracks, generously supplied by Nunnally Johnson, with a naturalness that adds to their strikingly humorous effect, making the film the funniest comedy of the year.” – How to Marry a Millionaire (1953)

“Marilyn stars in three specialty numbers amusingly, as she does a comic burlesque as the sexy singer of naughty songs.” – There’s No Business Like Show Business (1954)

The New York Daily News has republished a number of archive articles relating to Joe DiMaggio, born a century ago this week. One of the sadder stories reports on his and Marilyn’s divorce hearing at the Santa Monica Court on October 27, 1954. Their marriage was short and turbulent, but they remained the best of friends – and no one was more loyal to her memory than Joe. 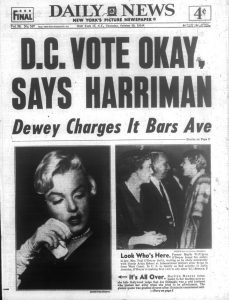 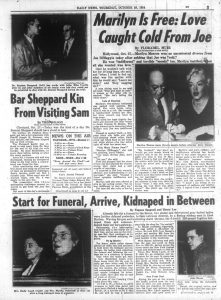 (Originally published by the Daily news on Thursday, Oct. 28, 1954; written by Florabel Muir)

He was ‘indifferent’ and terribly ‘moody’ too, Marilyn testified, when all she wanted was love.

Once he wouldn’t talk with her for 10 long days, she said, and “when I tried to find out what was the matter with him he would say: Leave me alone! and Stop nagging me!’

A man sitting next to me said out loud: ‘That guy must be nuts.’ A woman on the other side remarked:

‘She isn’t telling the whole story.’

Marilyn’s five-minute testimony was packed with emotion. She sighed. Her voice broke twice. Once it was in a sob. She brought a handkerchief toward her face, but there weren’t any tears to wipe away.

She tilted her head slightly forward and directed her little words to Judge Orlando H. Rhodes. The judge seemed quite interested when Marilyn said Joe was indifferent to her.

Dressed in somber black – a two-piece black silk faille suit with half-plunging shawl collar, black straw hat tilted back on her head, and white gloves – she was asked right off what her name was.

Then she plunged into her story of how Joe had spurned her charms during their eight and a half months of marriage.

‘I expected to find love, warmth, affection and understanding in my marriage,’ she said. ‘Instead I found complete indifference and coldness.’

Marilyn said she even offered to give up her acting career, ‘but he was indifferent to that offer too.’

Not once did she refer to Joe by name.

‘My husband,’ she went on, ‘would get into moods where he wouldn’t talk to me for seven or eight – one time it was 10 days. When I tried to find out what was the matter with him he would say Leave me alone and Stop nagging me.’

‘I was not permitted to have any visitors in the house without an argument. I don’t think we had visitors more than three times during our marriage.’

Once, Marilyn said, Joe permitted someone to come into their big house ‘when I was sick, but all during the visit there was great strain.’ She didn’t say who the visitor was.

Marilyn said Joe’s coldness and indifference affected her health and ‘I was under the care of my doctor quite a bit of the time.’

Marilyn’s business manager, Mrs. Inez Melson, corroborated her story. She said when Marilyn tried to give Joe warmth he would push her away and said ‘Don’t bother me.’ She swore that before Joe and Marilyn broke up in late September – they lived under the same roof for a week, he downstairs and she upstairs – Joe told her: ‘I know I am wrong in my approach to coldness and indifference. I regret it but I cannot help it.’ 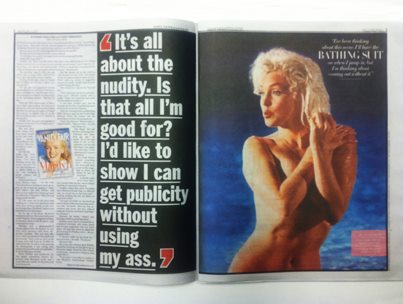