Over at Garage Magazine, Tatum Dooley traces the origins of Marilyn’s famous quote regarding her favourite perfume…

“When asked what she wore to bed, Marilyn Monroe famously replied, ‘I only wear Chanel No. 5.’

The quote originates from a retelling by Monroe to Life Magazine in April 1952. The question wasn’t posed by Life; instead Monroe offered it up as a anecdote: “Once this fellow says, “Marilyn, what do you wear to bed?’ So I said I only wear Chanel No. 5.”‘

A bastardized version often tidily conflates Monroe as both speakers: ‘What do I wear in bed? Why, Chanel No. 5, of course.’

Monroe is the subject of the second advertisement in a multi-part campaign, titled ‘Inside Chanel,’ levied by the brand. The ad, at just over two minutes, makes Monroe a posthumous face of the venerable perfume. ‘We may never know when she said the phrase for the first time,’ the video states about Monroe’s famous reference to the perfume, going on to cite all the times they have proof it happened: April 7th, 1952, in Life Magazine. October 1953, at a photoshoot for Modern Screen. April 1970, Marie Claire.

But…it’s the truth lingers on the screen.”

“I didn’t know Montgomery Clift but when I was a young movie magazine editor for something called Modern Screen I often begged the editor-in-chief to write about him. I knew he was talented. But the editors stuck with Tony Curtis.

I went on to know more about Clift because my straight brother, Bobby, worked as a waiter in a gay cafe on Christopher Street. He often served Clift and always told me after about how unhappy he seemed. “He gave big tips!” said Bobby, who even then had a live-and-let-live attitude.

I finally saw Montgomery Clift in person, with Marilyn Monroe, at the New York premiere of The Misfits. They sat right in front of me, enjoying each other like real friends. I was mostly stunned by how gorgeous she looked in a black fox fur. It was a privilege to see them even once.

As you know, Elizabeth Taylor, too, loved Monty and took a lot of care of him through their experiences on A Place in The Sun, Raintree County (she saved his life after his terrible car accident) and Suddenly Last Summer. Elizabeth also put up the insurance money for Monty to co-star with her in Reflections In a Golden Eye. But he died just before production began. Marlon Brando, in all his mannered glory, took the role.)

However, after working with Monroe in The Misfits Monty declared, ‘I would rather work with Marilyn than any other actress.'”

According to That Woman: A Life of Wallis Simpson – Duchess of Windsor, a new biography by Anne Sebba, the American socialite whose affair with Edward VIII, England’s king, led to his abdication in 1936, was peeved when, in the 1950s, her fame was eclipsed by Marilyn Monroe.

An extract published in the New York Times reveals that Monroe and the Duchess – two of the last century’s most famous women – shared a mutual acquaintance in the writer and society hostess, Elsa Maxwell.

‘Charles Pick, the publisher, had several meetings with the duchess, whom he described as “a rather brittle, hard and vain person.” Having been warned in advance by the Foreign Office not to refer to her as Her Royal Highness, he was on his guard when they first met. She was, he recalled, lying on a chaise longue, with a large box of Charbonnel et Walker chocolates within reach. “As she rose to greet me, her opening remark was: ‘Can you tell me who Marilyn Monroe’s publicity agent is? I have all the newspapers each day, and I was generally on the front page. But now I see that Marilyn Monroe is. . . . Well, somebody has pushed me off.’ ”

Elsa Maxwell, the gossip columnist and party hostess who got to know Wallis after the war, had a very public falling out with her partly in connection with jealousy over Marilyn Monroe stealing headlines. They eventually reconciled, but not before Maxwell previewed “The Heart Has Its Reasons,” pointing out that the duchess “seeks to compensate for all she hoped for and lost with an almost feverish pursuit of pleasure. . . . Many of the things she has done in this search, largely because of the high-handed, selfish way in which she has done them, have contributed to her final frustration — the fact that the Windsors’ prestige is not what it used to be and the Windsors’ romantic aura is sadly diminished.”’

Marilyn lunched with Maxwell at the Waldorf-Astoria in February 1956. Though Maxwell had followed Monroe’s earlier career with enthusiasm, she was highly critical of the star’s decision to walk out on her studio in 1955.

The formidable Maxwell also disapproved of the skimpy black cocktail dress worn by Monroe on their lunch date. Nonetheless, their interview was published in Modern Screen in July, with a headline quote from MM: ‘I’ll Never Be the Same’. 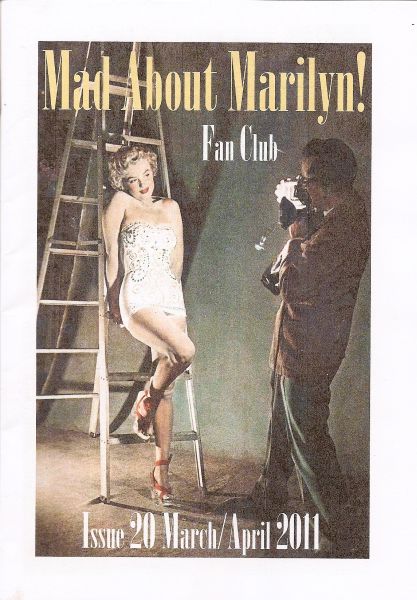 My reviews of Cindy De La Hoz’s Marilyn Monroe: The Personal Archive and MM – Personal by Lois Banner are featured in the latest issue of the Mad About Marilyn fanzine, which also includes a vintage article, ‘…and the Lord Taketh Away’, from Modern Screen in 1957; a piece on Marilyn’s 1955 visit to USS Bennington; and a profile of photographer Douglas Kirkland.

If you would like to join the Mad About Marilyn Fan Club, please email Emma: emmadowning@blueyonder.co.uk