In an article for Atlas Obscura, Oleg Alexandrov investigates the story behind Marilyn’s final resting place at Westwood Memorial Park in Los Angeles.

“After dying of a drug overdose in what was an apparent suicide on August 5, 1962, Marilyn Monroe was interred three days later at Westwood Village Memorial Cemetery. The funeral arrangements were handled by Joe DiMaggio …

Feeling some resentment toward the entertainment industry for Monroe’s demise, DiMaggio had no interest in making the funeral a Hollywood affair. Westwood was, at a the time, a quiet, out-of-the-way cemetery chosen because it was also the final resting place of Monroe’s childhood guardian, Grace Goddard, and her surrogate mother Ana Lower. The private service was restricted to a small group of the star’s closest friends and associates.

Ironically, thanks to the presence of Marilyn Monroe’s grave, Westwood has been a popular place for celebrity burials ever since …

For 20 years after her death, DiMaggio had red roses delivered to her simple grave three times a week. Today, it is regularly adorned with flowers, cards, letters, and other mementos left by the regular visitors it attracts.” 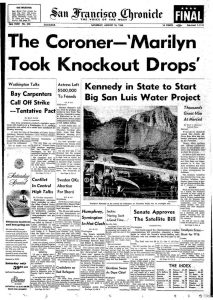 Vernon Scott was a famous show-business writer who knew Marilyn throughout her career. This is an extract from an article he wrote for his syndicated UPI column on August 8, 1962, commemorating her death. (He would survive her by forty years – you can read more about Mr Scott here.)

“The beautiful girl-woman had nothing left now. She couldn’t work under the terms of her studio contract although there were scores of offers. Nor could she lose herself in another romantic entanglement … The heartbreak of her marriages to Miller and DiMaggio had wrung her almost dry of emotion. What, then, was there left for the most glittering glamour girl in memory?

In a recent magazine story she said, ‘I was brought up differently from the average American child because the average child is brought up expecting to be happy.’ Again, she said, ‘Fame may go by and so long, I’ve had you fame.’ In death Marilyn could not say, ‘So long, I’ve had you, life.’ She had only a tiny piece of life, and for those of us who knew and admired Marilyn Monroe there remains soul-scaring remorse that none was able to provide her with the knowledge that she was indeed loved and cherished.”

Thanks to Deb Skylar

Dr Howard Markel has written an article for PBS about Marilyn’s fatal overdose. While there are some inaccuracies – for example, he says she had been drinking alcohol when she died, which is incorrect – his citing her prescription drug addiction as a ‘modern epidemic’ rings true.

“Lonely and harassed, Marilyn found getting to sleep especially difficult. To counteract her insomnia, she often cracked open a Nembutal capsule (so that it would absorb faster into her bloodstream), added a chloral hydrate tablet (an old fashioned sedative better known in detective stories as a ‘Mickey Finn’, or ‘knockout drops’,), and washed them both down with a tumbler of champagne. This is a particularly lethal cocktail, not only because each of these drugs increase, or potentiate, the power of the other, but also because people who take this combination often forget how much they previously consumed, or whether they took them at all, and soon reach for another dose.

What remains most cautionary to 21st century readers is that the majority of the substances Marilyn was abusing were prescribed to her by physicians, all of whom should have known better than to leave a mentally ill patient with such a large stash of deadly medications. The barbiturates that killed her are rarely, if ever prescribed, today. Nevertheless, Monroe, like Judy Garland, Michael Jackson, Prince, and too many other famous Hollywood stars who overdosed, was adept at manipulating her doctors to prescribe the drugs she craved and felt she needed to get through her tortured days and nights. This treacherous course worked, albeit haphazardly, until it didn’t work anymore and resulted in a talented young woman dying far too young.

Marilyn once told a reporter, ‘the [best] thing for me is sleep, then at least I can dream.’ Sadly, Marilyn Monroe’s overdose represents the darker side of medical progress. Five decades after she died, and with the development of so many new, addictive, and potentially lethal painkillers and sedatives, this epidemic has only grown worse. Today, physicians, nurses, family members, and patients are all still struggling to grapple with its effects and stem its deadly tide.” 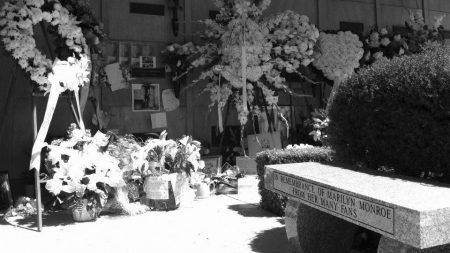 The 2016 memorial service for Marilyn will be streamed live from Westwood Memorial Park in Los Angeles tomorrow, August 5, at 11 am (Pacific Time Zone.) You can watch online via Marilyn Remembered on Facebook – more details here.