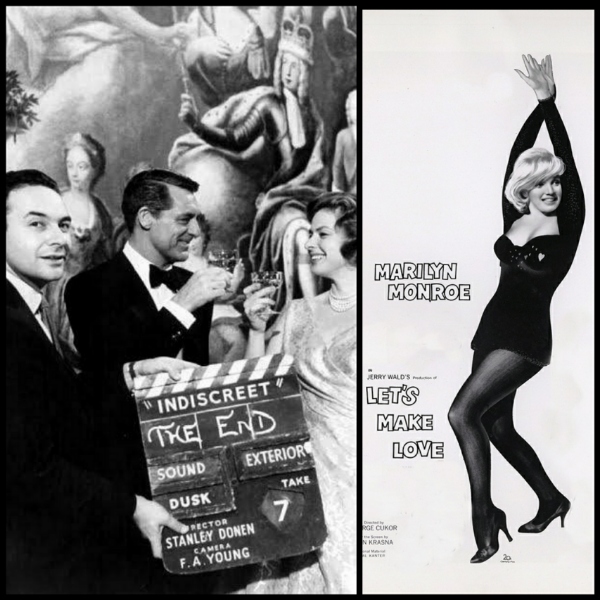 Filmmaker Stanley Donen has died aged 94. He co-directed and choreographed classic musicals such as On the Town (1949) and Singin’ in the Rain (1952) with Gene Kelly, and made three films with Audrey Hepburn. The second of Donen’s five wives, Marion Marshall, had appeared alongside a young Marilyn Monroe in A Ticket to Tomahawk (1950.) He also dated Judy Holliday and Elizabeth Taylor, and is survived by his partner of thirty years, the writer and director Elaine May.

Donen never worked with Marilyn, but in a 1999 interview (posted on the Film Talk website), Donen revealed he had rejected a project which Marilyn later filmed with George Cukor, before choosing Indiscreet, a sophisticated romantic comedy starring Cary Grant and Ingrid Bergman, which as columnist Louella Parsons had reported in 1956, was originally slated for Clark Gable and either Marilyn or Jayne Mansfield.

“Norman Krasna gave me a script he had written, which was eventually made with Marilyn Monroe and Yves Montand [Let’s Make Love, 1960], but I didn’t like it. He then said, ‘You know, I did a play in New York which was a flop [Kind Sir, directed by Joshua Logan in 1952 and starring Charles Boyer and Mary Martin], but why don’t you read it? Maybe you’ll like it.’ I read it, and I was very impressed. I told him, “God, this would make a wonderful movie.’ ‘You think so? Every studio in town has turned it down,’ he said. ‘You know what, you own it, if you can get it made, I’ll write the screenplay.’ So I got it made, I got Cary Grant and Ingrid Bergman and we made Indiscreet [1958]. That was the real beginning of me being a producer, I liked putting it together.”