In another look at the upcoming Legends sale at Julien’s Auctions on June 13-14 (see previous posts here), Marilyn rubs shoulders with her fellow stars.

“A group of eight telephone messages from April, May and June 1961 while Marilyn was staying at the Beverly Hills Hotel. Messages from those instantly recognized in Marilyn’s inner-circle include Frank McCarthy of Twentieth Century-Fox, comedian Ernie Kovacs, and director George Cukor. Interestingly, Marilyn received a message from a “Dr. Goddard” on May 28. Dr. Goddard is presumably the husband of Grace Goddard, who fostered Marilyn as a young child.” (SOLD for $1,600)

“A typed form letter from Dorothy Frooks, publisher of The Murray Hills News, inviting Marilyn to the annual Pro-American Rally on September 25, 1959, which would take place ‘between 37th and 38th Streets.’ Included is a handwritten letter from Cowboy Tex Weinstein asking Marilyn to attend. ” (SOLD for $375)

“A telegram to Marilyn from Lauren Bacall, dated January 18, 1954, congratulating Marilyn on her marriage to baseball legend Joe DiMaggio. The telegram reads, ‘All the best luck always. Couldn’t be more delighted for you. Now you’ll really know how wonderful life can be. Love, Schatze Bogart.’ Interestingly, Bacall signed the telegram using the first name of her character in How to Marry a Millionaire, the film she had starred in with Marilyn the year prior to the Monroe/DiMaggio wedding, and the last name of her movie star husband, Humphrey Bogart. The telegram is addressed to ‘Mrs. Joe DiMaggio’ at Marilyn’s apartment on North Doheny Drive in Beverly Hills.” (SOLD to Gary Vitaccco-Robles, author of Icon: The Life, Times and Films of Marilyn Monroe, for $1,562.50)

“A one-page typed letter to Marilyn from television personality Jack Benny, dated July 13, 1961. The letter reads in part, ‘This little note is merely to say that I do hope you will be feeling much better and that I miss seeing you – even though it is on rare occasions.’ The letter is signed, “Love – Jack,” in his own handwriting. Also, a holiday card from Mary and Jack Benny from 1954. Marilyn’s first-ever television appearance was on The Jack Benny Show on September 13, 1953. They remained friends throughout her entire life.” (SOLD for $750)

“A one-page typed letter to Marilyn, dated June 17, 1958, in regards to the release of SNOOPY, the new book by famed cartoonist Charles Schulz, creator of the comic strip Peanuts. The letter reads, ‘Dear Miss Monroe, As I promised some weeks ago I am having sent to you under separate cover a few copies of Charles Schulz’s new “Peanuts” book, SNOOPY, which just came in from the bindery. I hope you like SNOOPY as much as we like publishing him.’ The letter is signed, ‘Sincerely yours, Theodore S. Amussen, Vice President.'” (SOLD for $576)

“A collection of approximately 30 vintage magazines, books, and other publications, from the collection of actress Morgan Fairchild: including Movieland magazine (October 1952); Silver Screen magazine (October 1953); Song Fan magazine (July 1954); LIFE magazine (November 1959); TV and Movie Screen magazine (September 1960); LOOK magazine (January 1961); LIFE magazine (August 1964); the cover of Show magazine (September 1972, framed); Parade magazine (framed); and the August 6, 1962, edition of the Los Angeles Times with the headline ‘Marilyn Monroe Found Dead.’ Together with six books on the life of Monroe, several greeting cards with Monroe’s image, and a poster produced from a photo by Philippe Halsman showing Monroe at the gym.” (SOLD for $768)

The great comedian Jack Benny was born on this day in 1894. His 1953 skit with Marilyn – one of her rare television appearances – is reviewed over at CBS today.

“By the mid 1950s, he’d moved on to television, often portraying a most unlikely ladies man … as in this sketch with Marilyn Monroe:

Monroe: ‘Because I can’t trust myself with you.'” 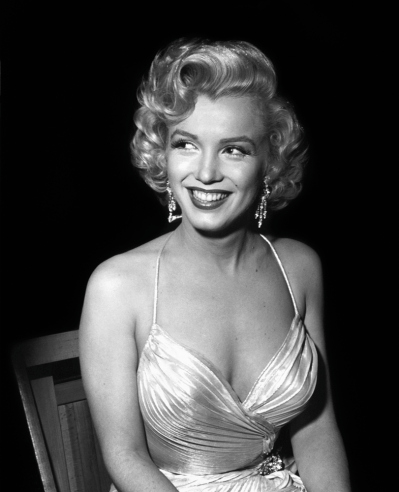 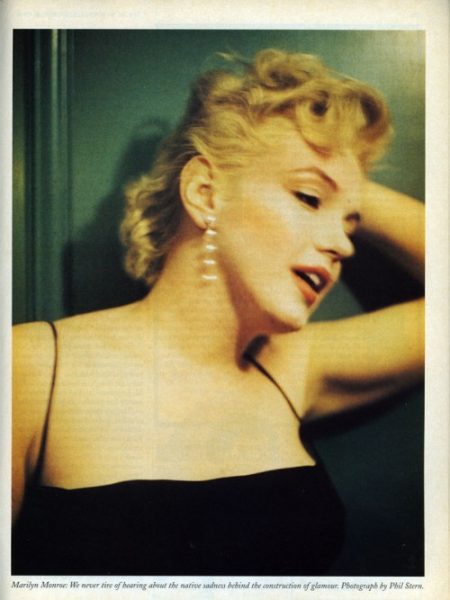 Photographer Phil Stern, who turned 95 this week, has donated prints of 95 of his iconic shots to the Veterans Home of California, where he is currently a resident, reports Media Bistro. A special celebration and unveiling of the donated prints is scheduled for this weekend.

Marilyn is pictured here at a backstage at a children’s benefit at the Shrine Auditorium in 1953. In another, most pensive photo, she poses with Jack Benny. They had filmed a hilarious sketch for his television show at the same venue in September. Although Marilyn’s expression looks tragic, the photograph may have been staged to present two comedic stars in a different mood.