A 1953 Frank Powolny portrait, inscribed ‘To Cheryl, Love & kisses, Marilyn Monroe’, was sold for $13,636 at RR Auctions’ Fine Autographs and Artifacts sale yesterday. Bob Towers’ photo of Marilyn arriving at Phoenix Airport in 1956 sold for $578, while a photo taken during filming of The Misfits (attributed to Henri Cartier-Bresson), and a wire photo of Marilyn posing with U.S. servicewomen raised $525 each.

These candid photos of Marilyn, taken circa 1961, will go under the hammer at RR Auctions on June 12, as part of their latest Fine Autographs and Artifacts sale.

Although usually credited to Inge Morath, these photos (taken in 1960, during filming of The Misfits) are stamped with the name of Henri Cartier-Bresson, her colleague at the Magnum Photos agency (they visited the set in tandem.)

This wire photo was taken during Marilyn’s visit to the 1952 Miss America pageant in Atlantic City. Another photo taken with these young servicewomen caused a minor scandal, as mentioned in the caption. Some more information from the shoot is posted below (although the quote attributed to Marilyn was later refuted by her own publicist in a 1955 interview with the Saturday Evening Post‘s Pete Martin.)

“The low-cut summer dress she was wearing caught the attention of a photographer, who stood on a chair to better capture the outfit’s full effect. Upon seeing the photo, an Army information officer ordered it killed because he did not want to give the parents of potential recruits the ‘wrong impression’ about Army life. Information about the suppression of the photo was leaked to the press and then turned into frontpage news.

‘Leg art’ photo sessions were a never-ending part of Marilyn’s career, and one that she worked at with enthusiasm and good humor.

When asked her opinion of the situation for a story titled ‘Marilyn Wounded by Army Blushoff,’ Marilyn replied in her tongue-in-cheek manner, ‘I am very surprised and very hurt. I wasn’t aware of any objectionable décolletage on my part. I’d noticed people looking at me all day, but I thought they were admiring my Grand Marshal’s badge!'”

One of the distinctive photo manipulations of Arthur ‘Weegee’ Fellig, based on his image of Marilyn at the Racquet Club, Palm Springs in 1949.

This photo of Marilyn with fellow celebrity usher Marlon Brando at the 1955 premiere of The Rose Tattoo comes from the collection of George Zeno, who has contributed to books including James Spada’s Monroe: A Life in Pictures (1982), and Christopher Nickens’ Marilyn in Fashion (2012.)

This photo shows Marilyn arriving at Phoenix Airport to film the rodeo scenes for Bus Stop in 1956.

This shot of Marilyn singing alongside pianist Hal Schaefer, taken by John Florea in 1954, is part of a complete first series set of ‘Marilyn Monroe Trade Cards’ in their original packaging, entitled ‘Marilyn and Her Music,’ containing cards #1-20. 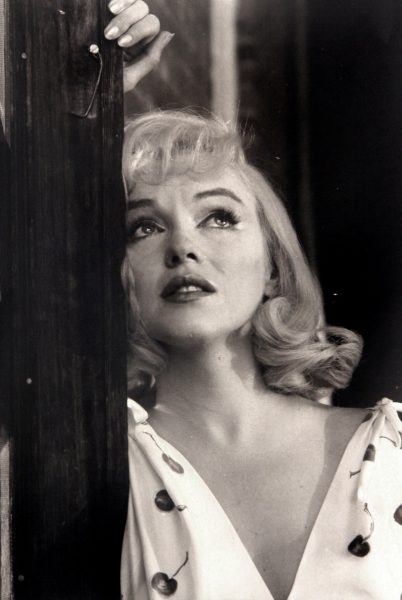 Writing for the Mutual Art website, Jordan Mitchell explores the history of the Magnum Photos agency through ten iconic photographers. Marilyn is mentioned in relation to Eve Arnold (see above), but three more of the other artists also photographed her on the set of The Misfits…

Inge Morath: On Style is a new book focusing on the late photographer’s work in fashion and film. Her images of Marilyn on the set of The Misfits are elegant and tender, and the knowledge that Morath would become Arthur Miller’s third wife adds a note of poignancy. Author Justine Picardie writes about Inge’s work with director John Huston, and her later encounter with Arthur which led to a long and happy marriage, in a blog post for the Magnum website.

“This was also the period when Morath first started working with the director John Huston; one of her earliest assignments was to photograph the stills for his film Moulin Rouge in London in 1952, which was to be the start of a lifelong friendship … Huston would later describe Morath as ‘a high priestess of photography,’ a woman with ‘the rare ability to penetrate beyond surfaces and reveal what makes her subject tick.’

Morath’s friendship with Huston was to play an important part in her personal life, as well as her career. In 1959, she travelled to Mexico to photograph the making of his film The Unforgiven … The following year, Morath visited the set of another of Huston’s films, The Misfits, accompanied by her Magnum colleague, Henri Cartier-Bresson.

When Morath was subsequently asked by the New York Times about the experience of photo- graphing Monroe, she described the actress as ‘kind of shimmery. But there was also this sadness underneath. A poetry of unhappiness. That was what was so mesmerizing, the twofold thing you got, the unhappiness always underneath the joy and the glamour…that was the poetry.’ In the same interview, Morath added one more intriguing fragment to the story. ‘I once dreamt we both danced together, Marilyn and I. It was beautiful.'”

‘Marilyn, Magnum and The Misfits‘ is a new exhibition opening at the Etherton Gallery in Tucson, Arizona this Saturday, November 23, through to January 11, 2014.

Its remit goes beyond The Misfits however, celebrating Magnum photos from other eras as well as other notable photographers including Alfred Eisenstadt and Nahum Baron.

Some of the photos above – by Henri Cartier-Bresson, Inge Morath and Eve Arnold – were rare for me. You can view them all here.

“Etherton Gallery is pleased to announce a new exhibition, Marilyn, Magnum and The Misfits, featuring a selection of photographs of Marilyn Monroe from a private Los Angeles collection. Most of the photographs on display are from the set of Marilyn’s last film, The Misfits, taken by notable Magnum photographers including Eve Arnold, Bruce Davidson, Henri Cartier-Bresson, Dennis Stock, and Inge Morath. A selection of early contact sheets by Hollywood photographer Earl Leaf and fashion and celebrity photographer, Phillipe Halsman, will also be on view from November 23, 2013 – January 11, 2014.

Magnum Photos, founded in 1947 by several well-known photographers including Henri Cartier-Bresson and Robert Capa, was the first artist-owned photo agency, allowing its numerous members to take control of their careers while giving them the freedom to search out events and people and ultimately inform a world hungry for information.

“You’re a real beautiful woman. It’s almost kind of an honor sittin’ next to ya’.”

With those words from the 1961 film, The Misfits, star Clark Gable wryly said what photographers world-wide knew about Marilyn Monroe: she was just special and no more so than when in front of a camera. And she knew it.

Incomparable director John Huston had a royal flush of a cast starring Monroe and Gable, along with Eli Wallach and Montgomery Clift, and he made sure that only the best photographers were on set for the press photos, and those photographers were from Magnum.

Lining up to film the stars while on and off the set –it would tragically be the last film for Monroe and Gable —were Magnum photographers including Henri Cartier-Bresson, Eve Arnold, Inge Morath, Philippe Halsman, Bruce Davidson, and Dennis Stock.

Along with The Misfits images, is a select group of contact sheets by photographer Earl Leaf, known for his work with magazines from Time to Movie Spotlight.  This intriguing group gives a sweet look at an early unknown Marilyn, swinging from a tree and doing cartwheels for the camera in 1950 and then 6 years later, at age 30, when she staged a publicity session to keep her image in front of the public during a one-year period when she was producing films and not acting.

The camera was always in love with the beautiful Monroe, and this rare exhibit of vintage contact sheets and press photos represents a historic look at one of the world’s most well-known film stars.  Resplendent in her natural beauty, the portraits and vintage contact sheets reveal the drive, desire, sadness, and pure spirit of one of Hollywood’s most photographed and relished stars