Film historian Jeanine Basinger is not a great fan of Marilyn – in her 2008 book, The Star Machine, she made the puzzling claim that Monroe was unpopular with filmgoers, though the statistics tell another story. Marilyn also rates a mention in Basinger’s latest book, The Movie Musical, in the context of Twentieth Century Fox’s long line of blonde musical stars.

“A discussion of Fox blondes, from [Alice] Faye to Monroe, defines the Fox musical factory system, but it has to begin with a blonde who started the trend but is seldom included in the pack. She’s a very little blonde: Shirley Temple. All the famous musical Fox blondes overlapped in film … [June] Haver appeared with Monroe in Love Nest (1951) and [Betty] Grable, the most famous musical star of them all, gave a boost to Monroe in How to Marry a Millionaire (1953.) The Fox blondes were powerhouses: Temple, Faye, Grable, and Monroe were all top-ten box office draws … Faye is closer in looks to Marilyn Monroe – the big, wide-set eyes, the lush mouth, and the vulnerable look combined with a zaftig body. [Grable was smaller, leaner and zippier – she gave off the energetic zeitgeist of the war years.)

Marilyn Monroe was neither a great singer or a great dancer, but she was good enough. Everyone accepted her breathy vocals as part of who she was, and her dancing was made into far more than it was by the great choreographer Jack Cole. Cole gave her hand gestures, hip movements, and head turns that had rhythm and attracted an audience’s eye …

Monroe was something of a challenge for Twentieth Century Fox. The studio apparently didn’t originally see her as a musical star … Monroe made only two pure musicals for Fox, Gentlemen Prefer Blondes (1953) and There’s No Business Like Show Business (1954.) She also sang in Niagara (1953), River Of No Return (1954), Some Like It Hot (1959), and Let’s Make Love (1960), usually with some dancing connection …

Monroe as a musical star in a typical Fox musical was not the Monroe who is usually defined as vulnerable, with a sad and wistful quality, a soul yearning for understanding while suffering the cruelties of an uncaring world … In both Gentlemen Prefer Blondes and There’s No Business Like Show Business, Monroe was self-confident, playing a woman who knew how to use men if she had to in order to achieve her career goals. Monroe has one enduring solo (with a chorus of men): her immortal ‘Diamonds Are a Girl’s Best Friend’ …

The best movie by which to evaluate Monroe as a musical performer is There’s No Business Like Show Business. She’s surrounded by top-drawer names who’ve each spent a lifetime in the game … Monroe doesn’t have the musical chops of a single one of these players. She is, however, Marilyn Monroe. What she’s got doesn’t necessarily need musical chops, and she’s not a terrible singer/dancer, just not a highly skilled one … Cole’s choreography is constructed to show off Monroe’s body and to use the audience’s established sense of her as a sex object, but without being offensive about it …

‘After You Get What You Want’ has a bold lyric that feigns innocence … [Monroe] looks nude, and she’s in the best shape of her life … She’s beautiful and young and lush, all pure sex, and yet despite all this, there’s a strange air of innocence about her. That was the thing Monroe had that made her famous. It wasn’t just sexiness, though she had that in abundance …

Monroe’s second song is a full-out production number with elaborate costumes and a chorus of dancers – a Cuban thing with costumes, bongo drums, and palm trees. There’s a full choreography for the ensemble, and it’s too much for Monroe … Monroe handles ‘Heat Wave’, but she didn’t need all the clutter around her.

‘Lazy’ is a PhD thesis. It’s played as a rehearsal for a number to be done by Monroe, [Donald] O’Connor, and [Mitzi] Gaynor. Monroe is dressed in tight capri pants, a low-cut V-neck top, and a brightly coloured cummerbund. She lolls on a chaise longue, singing the song in a languid style. While she sings, draping herself around the sofa … the other two dance around her … The less she does, just showing off her body, the more they do, showing off their superb dancing. It’s a musical contrast: sex vs. talent. And it’s devilishly clever from a business point of view …

Marilyn Monroe ended the Fox blonde cycle. She became too big for its limiting label, and the time for the concept was over, as the studio moved towards its death. She was never defined by her musical performances, and her career didn’t impact musical history much, but it did impact the career of the woman originally put under contract to become the next Fox blonde: the talented Sheree North, who is practically unknown today …”

As expected, Marilyn’s ‘Heat Wave’ costume from There’s No Business Like Show Business was the biggest seller at Julien’s Auctions yesterday, fetching $280,000 (over three times the maximum estimate) in the Property From the Life and Career of Marilyn Monroe sale – and Travilla’s ‘Heat Wave’ design sketch sold for $11,520. Marilyn’s ‘Little Rock’ costume from Gentlemen Prefer Blondes was close behind at $250,000 (while Jane Russell’s matching gown fetched $43,750.) Her River of No Return costume fetched $175,000, and the black cocktail dress she wore to the Some Like It Hot press conference reached $100,000.

I have now updated all my posts on this sale with final bids – see here.

Another selection of items featured in Property From the Life and Career of Marilyn Monroe, going under the hammer at Julien’s Auctions on Thursday, November 1. (You can read all my posts on the sale here.)

“A single page removed from a trade publication such as Variety or The Hollywood Reporter with text reading in part ‘Thank you / Marilyn Monroe’ — an ad the star placed in the publication to thank the Hollywood Foreign Press Association for her 1962 Golden Globe win for ‘World Favorite Actress,’ mounted to cardboard; found in Monroe’s own files. ”

Marilyn and Jane Russell performing ‘Two Little Girls From Little Rock’ in Gentlemen Prefer Blondes, as seen on the cover of LIFE magazine in 1953. Marilyn’s costume is expected to fetch a maximum $80,000 – see here.)

A still photo of Marilyn during filming of River of No Return in 1953. The gown she wore while performing the theme song is expected to fetch a maximum $80,000 – see here.

Travilla’s costume sketch for the ‘Heat Wave’ number in There’s No Business Like Show Business (1954), and a colour transparency of Marilyn in costume for a wardrobe test shot. (The costume itself is estimated to fetch up to $80,000 – see here.)

A framed still photo of Marilyn performing ‘Heat Wave‘, and a custom-made, one-of-a-kind poster made for the Century Theatre in the Hamilton, Ontario area to advertise a raffle to win tickets to see There’s No Show Business Like Show Business.

“A group of three, all original prints with a glossy finish, depicting the star behind-the-scenes on the set of her 1956 20th Century Fox film, Bus Stop; all have typed text on the bottom margin noting to credit Al Brack who was a ‘Sun Valley, Idaho photographer.'”

A pair of memos regarding Milton Greene’s photos from the set of The Prince and the Showgirl; and, sold separately, a contact sheet. The second memo reads in part, ‘Dear Mike, The print you sent me, that Marilyn Monroe said she had killed, is incorrectly numbered. Marilyn is right – she did kill it.’ Both memos are dated April 11, 1957, and are addressed to ‘Meyer Hunter.’ Lois Weber, one of Monroe’s publicists at the time, authored both memos.”

Still photo of Marilyn with co-stars Tony Curtis and Jack Lemmon in a scene from Some Like It Hot (1959.)

“A pair of colour slides of Marilyn Monroe in a scene from How To Marry a Millionaire (1953), and during a press conference for Let’s Make Love with co-star Frankie Vaughan on January 16, 1960.”

Still photos of Marilyn performing ‘My Heart Belongs to Daddy‘, and with director George Cukor, both taken on the set of Let’s Make Love.

Candid photos taken during filming of The Misfits in 1960.

Producer Henry Weinstein’s screenplay for the unfinished Something’s Got to Give (1962.)

Still photos taken by Lawrence Schiller during filming of the ‘pool scene’ in Something’s Got to Give.

‘Produced by Queens Theatre, Heat Wave is “an all-singing, all-dancing tribute to the work of Jack Cole, featuring recreations of more than two dozen Cole numbers from such films as ‘There’s No Business Like Show Business,’ ‘Kismet,’ ‘Les Girls’ and ‘On the Riviera,’ as well as new pieces choreographed in Cole’s inimitable style,” according to Queens Theatre notes.’ 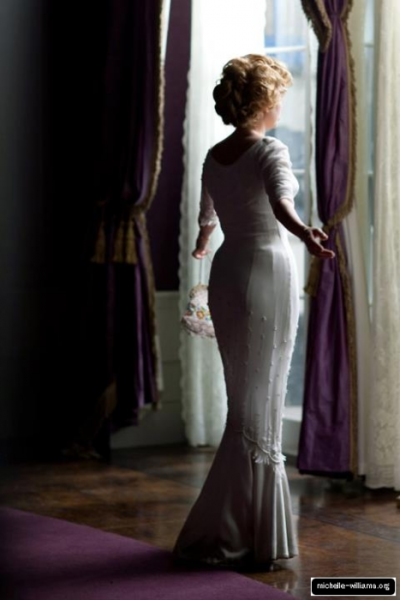 My Week With Marilyn continues to make headlines. People magazine reports the rumour that Queen Elizabeth may screen the movie privately at Buckingham Palace. Marilyn met the Queen at a premiere in 1956, and stayed at Parkside House, near to Windsor Castle and Eton. (Colin Clark claimed that he took Marilyn sight-seeing, though like the story in People, this may be stretching the truth.)

Among several newly-released clips from the movie is Michelle Williams’ performance of Heat Wave, which Marilyn immortalised in 1954’s There’s No Business Like Show Business.

Finally, costume designer Jill Taylor has been interviewed on the Vintage Seekers website about dressing Michelle as Marilyn:

“What I’ve always said about Marilyn is that she was way ahead of her time in terms of how she dressed in her everyday life. She really picked up on the American sportswear thing that was coming about with designers like Claire McCardell and Norman Morrill, who were making clothes that were less structured. In Britain we’d just come out of the New Look and were still wearing a lot of very tailored suits, but Marilyn’s wardrobe was much looser – how we ended up in the 60s is how she was in the 50s.

People pick up on the iconic Marilyn, the ‘tits ‘n’ ass’ sex symbol thing, but her sense of style is great. She wore simple lines and neutrals – a lot of white, beige, camel and black.

Someone like Audrey Hepburn had this wonderful style, thanks to Hubert de Givenchy, which she carried through from her private life to her film life, whereas Marilyn didn’t really do that; the Marilyn you see in her movies is a very different portrayal of the girl who went off to studios.” 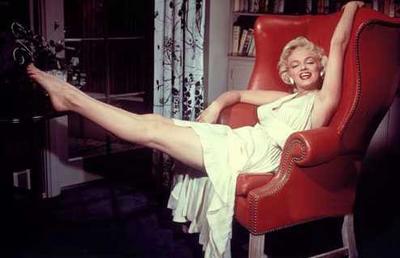