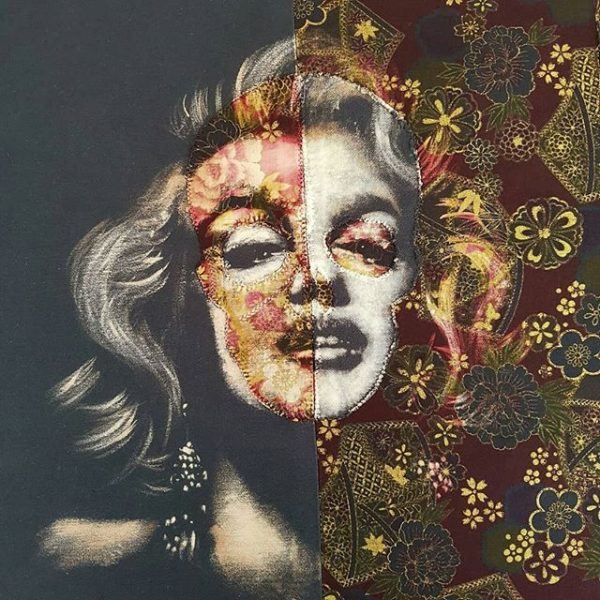 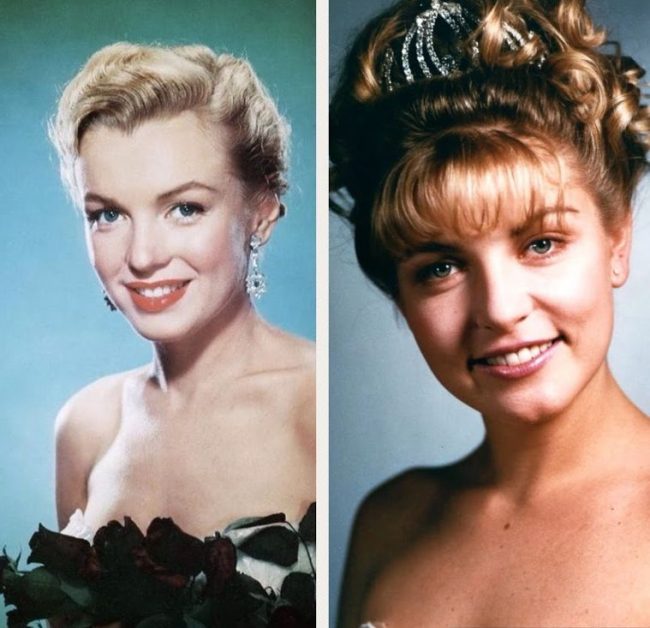 If you’re a fan of cult TV series Twin Peaks, you’ll already know that director David Lynch and writer Mark Frost created it after shelving an earlier collaboration based on Anthony Summers’ Goddess.) There are striking parallels between the main female protagonist, Laura Palmer (played by Sheryl Lee), and Marilyn, which go beyond their mysterious deaths.

In last year’s Twin Peaks revival, Marilyn’s Bus Stop co-star Don Murray played a key role. Actors Russ Tamblyn and Miguel Ferrer also had real-life links to Marilyn. I was also reminded of her sensual performance in Niagara during a scene where beautiful FBI agent Tammy Preston (Chrysta Bell) is filmed walking away from the camera, while ditzy casino hostess Candie (Amy Shiels) resembled Lorelei in Gentlemen Prefer Blondes, even wearing a pink tutu with matching gloves and diamonds, not unlike Marilyn’s costume in the ‘Diamonds Are a Girl’s Best Friend’ number….

But maybe that’s all just wishful thinking on my part. Going back to the original series, Zach Gayne explores the similarities between Marilyn and Laura in ‘Twin Peaks and the Point of No Return‘, an essay for Screen Anarchy.

“Lately, I’ve been thinking a lot about Marilyn Monroe and the abandoned project that first united David Lynch and Mark Frost – the two were apparently interested in co-adapting Anthony Summers’ expose, Goddess: The Secret Lives of Marilyn Monroe. While this is absolute conjecture, I can’t help but wonder if the two minds, who’d bonded over their interest in detailing the story of a fallen goddess – adored by all, but understood by few, who’s shadow ultimately overcame her angel – felt that the exploring Monroe when she was still Norma Jeane wouldn’t be the more effective way to detail the all-too-common American tragedy of a bright young woman succumbing to purveyors of darkness.

Laura Palmer is nothing if not a high-school Marilyn Monroe – a magnetic soul who draws no shortage of desire from, not only the hottest boy in school, but many of the town’s adults, like the local psychedelic psychologist or the wealthy hotel tycoon. One might say she brought out the best or worst in people, depending on their innermost natures. Laura, a supreme beacon of light, in addition to attracting love of the purest kind also attracted fire, and for her sins of merely existing, from a young age she was met with dark temptations as old as the ghostwood forest, like so many generations of distressed damsels and lads before and after her.”

Russell Young is another British artist inspired by MM. His ‘Marilyn Crying’, coated in diamond dust, has become quite popular in recent years. It has inevitably been compared to Warhol, though personally I like the tenderness of Young’s image.

“One thing that is clear from the Wild at Heart series is his indebtedness to Andy Warhol through his print process and subject matters. The likeness is almost uncomfortably apparent, lacking the ‘here and now’ and intimacy that Warhol shared with his subjects during his Factory days. Warhol’s Marilyn Diptych was completed during the weeks after Monroe’s death and addresses her celebrity status, portrayal by the media and early death. Young’s glitzy prints salute old school Hollywood glamour and appear to sugar-coat as opposed to challenge representations of iconic Hollywood figures.” – Nastassja Smart, The Upcoming

What Marilyn Crying arguably lacks in originality, however, it may gain in context. The image – based on a photo by George Silk – was previously used for Anthony Summers’ 1985 biography, Goddess: The Secret Lives of MM. It was taken during a press conference in October 1954, when Marilyn announced her separation from Joe DiMaggio. Disturbingly, the image seems to show a bruise on Marilyn’s forehead. 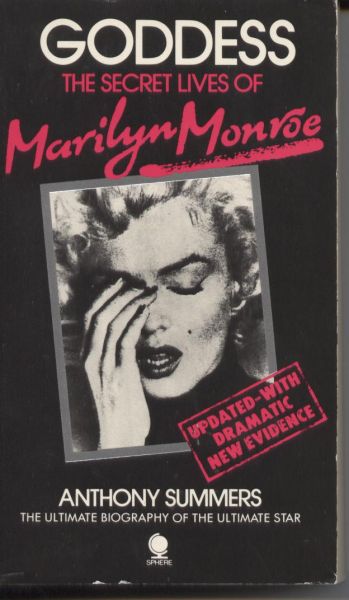 ‘Marilyn Crying’ is currently on display at Young’s latest exhibition, Wild at Heart (perhaps riffing on the title of David Lynch’s cult movie), at the cheekily-named Imitate Modern in London’s West End. 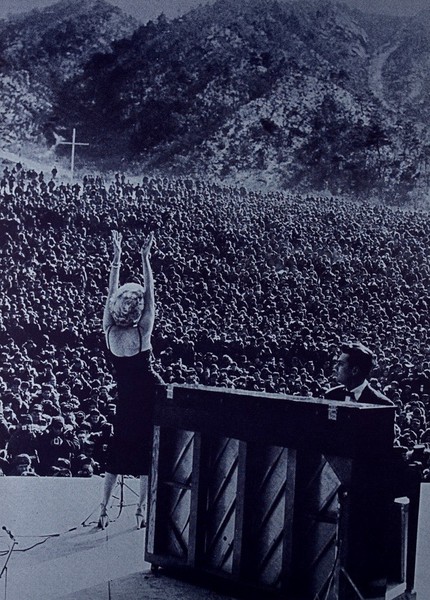 One photo taken at the exhibition appears to show Young’s image juxtaposed with a press picture taken several months before, when Marilyn entertained US troops in Korea. It was one of the high-points of her career, but some felt it also marked the dawn of her marriage’s end.

Goddess: The Secret Lives of Marilyn Monroe became a bestseller after its release in 1985, and has remained in print ever since. This full-scale biography – with a special emphasis on Marilyn’s alleged links to the Kennedys – was written by investigative journalist Anthony Summers.

While generally popular, Goddess tends to divide fans – particularly because both Robert Slatzer and Jeanne Carmen feature heavily, and their association with Marilyn has been widely disputed. Secondly, its inclusion of an autopsy photo was also controversial.

Nonetheless, Goddess is well worth reading, whether or not you agree with its conclusions – for its exhaustive research, and to understand how it has shaped our perceptions of Marilyn. It is now available in ebook from UK online bookstores, including Amazon.

Writing for the Malibu Times, Colin Newton explores the history of Cypress Sea Cove, a hangout for surfers since the 1940s:

“The story of Cypress Sea Cove begins in the 1940s with its original owner George “Cap” Watkins, a Bunyon-esque character who would eventually turn the place into his own private Shangri-La.

Between the palm trees, hammocks were strung up, and five-gallon plastic jugs were filled with rum drinks. Guests as varied as then-California Governor—and later Supreme Court Justice— Earl Warren and blond bombshell Marilyn Monroe showed up, as well as pioneer surfers and many of Watkins’ lifeguard friends.”

The article states that Marilyn was then the girlfriend of lifeguard Tommy Zahn. This would place her visits around 1946-7, during her first year as a Hollywood actress.

Zahn was signed to Fox at around the same time – mainly because studio chief Darryl F Zanuck‘s daughter, Darrylin, had taken a shine to him. It was while working as a contract player that Tommy met the 20 year-old Marilyn.

“‘[MM] was in prime condition,’ says Tommy Zahn, ‘tremendously fit. I used to take her surfing up at Malibu…She was really good in the water, very robust, so healthy, a really fine attitude towards life.'”

This echoes other recollections of a young, sporty Marilyn. In later years, however, she was less confident in water.

Zahn recalled that Marilyn was the most hard-working of all the young actors. They often worked together on dance, which they both found challenging.

After talking to Zahn, Summers formed an interesting theory as to why Marilyn was dropped by the studio in 1947, which may also partly explain why – even after she became a star – Zanuck was never a strong supporter of MM.

“Tommy Zahn, Marilyn’s lifeguard boyfriend, thinks he knows what happened, not least because he was fired at the same time. Zahn believes that he was only hired in the first place because Zanuck wished to groom him for marriage to one of his daughters. Zahn’s dalliance with Marilyn was noted and disapproved from on high, and both were fired. Zahn shipped out to Honolulu. Marilyn was adrift, professionally and emotionally.”

By the time Tommy Zahn died in 1991, he was a sporting hero, with a distinguished career behind him. You can read a recollection of his life by Craig Lockwood at EatonSurf.com. A biography of Zahn – including a chapter entitled ‘Hollywood & Marilyn’ – is downloadable from the Legendary Surfers website. 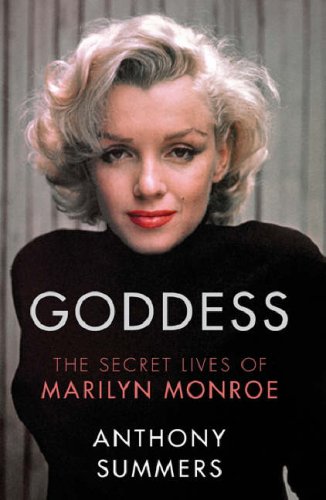 Having reviewed Marilyn’s Men by Jane Ellen Wayne recently, blogger xoxoxoe (aka Elizabeth Periale) takes an in-depth look at Goddess: The Secret Lives of Marilyn Monroe, the controversial biography by Anthony Summers, over at Cannonball Read IV. Read her review in full here. And to check out her other MM-related articles, click here.

“Marilyn’s life is usually presented as an inexorable, inevitable, and pathetic progression towards her death. Death is waiting for us all, but we wouldn’t be able to function if we didn’t have hopes and dreams for our present and future. For all of her talk about death, Marilyn did, too…Summers gets a little too sidetracked in Goddess: The Secret Lives of Marilyn Monroe with the Kennedys and their amorous and political complications. Poor Marilyn gets lost in the middle of the book in the Kennedy glare. The last few chapters present a Rashomon-like account of her final hours. It’s well-researched, but full of so many conflicting statements by people who claimed to be ‘on the scene’ that it is depressing and dizzying to read.”

Meanwhile over at Videogum, we learn that Goddess was once mooted to be adapted for the big screen with David Lynch as director…

“David Lynch, who had experienced previous success with the acclaimed The Elephant Man (1980) and Blue Velvet (1986), was hired by a Warner Bros. executive to direct a film about the life of Marilyn Monroe, based on the best-selling book Goddess. Lynch recalls being ‘sort of interested. I loved the idea of this woman in trouble, but I didn’t know if I liked it being a real story.’ Lynch’s agent, Tony Krantz suggested the director work with his friend and writer Mark Frost. He worked on the Goddess screenplay with Lynch. Even though this project was dropped by Warner Brothers, Lynch and Frost became good friends…” 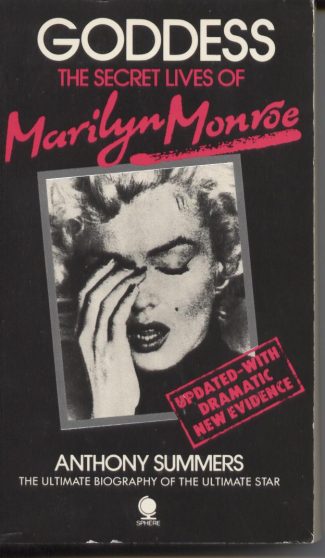 Anthony Summers, author of best-selling, investigative biographies including Goddess: The Secret Lives of Marilyn Monroe (1986), will give a talk with the tongue-in-cheek title, ‘How to Write Books and Other Things of Which I Know Nothing…’, at the Red Store Bar and Restaurant, North Main St, Youghal, in County Cork, Ireland, on March 23. Admission free to members of Youghal’s Ailbrin Society, 5 Euros otherwise.