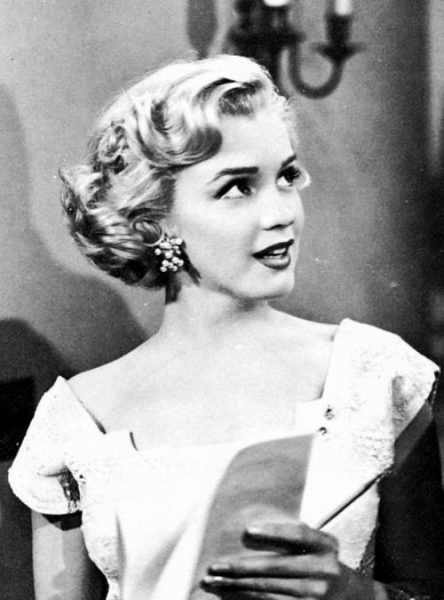 Writing for the excellent Girls Do Film blog, Victoria Loomes takes a welcome look back at one of Marilyn’s lesser-known early roles, as secretary Harriet in 1951’s As Young As You Feel. (While you’re visiting the site, check out related posts on The Misfits and Some Like it Hot.)

“Monroe’s part is small but impactful: in one great scene she becomes so frustrated at her boss she sticks her tongue out. In fact, one of the most remarkable things about her performance is her voice: it lacks the breathy whispery tones for which she would become synonymous, instead it’s warm (almost husky) with a matter-of-fact edge. Although she might be a ditzy secretary, Monroe is actually a lot less ditzy that in some of her other roles, but the studio were keen to play up her bombshell role.

There’s a lot of characters and sub-plots in As Young As You Feel, but Marilyn’s wardrobe ensured that she stood out from the noise. Marilyn might have been ‘window dressing’ but Renié, the film’s costume designer, made sure she looked the part. Harriet’s wardrobe doesn’t exactly match her lowly secretary status…there’s no disguising Marilyn herself was a movie star in the making – it’s finished with rhinestone pins, stacked bangles and showy earrings.”