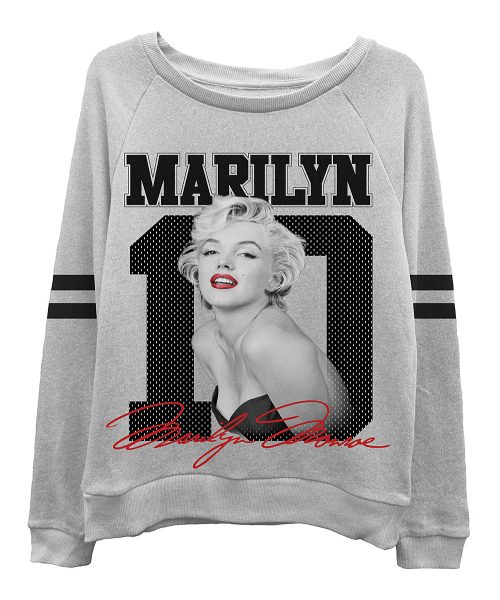 Representatives of Marilyn and Elvis Presley’s estates are suing a clothing company for a total of $353,500 in royalties and penalties, the New York Post reports. Central Mills, under its Freeze Apparel division, manufactured a range of tops featuring Marilyn’s image, such as the sweater shown above. TapouT LLC is a clothing division of Authentic Brands Group (ABG), the licensing arm of Marilyn’s estate. The two companies parted ways in December 2017.

In an interesting article for Broadly, Mitchell Sunderland explores the bizarre phenomenon of #ThugMarilyn – the images of a tattooed, gun-toting MM which adorn unofficial t-shirts, phone covers and social media pages, yet are the antithesis of the real Marilyn’s sweetly sexy persona and her gentle, introspective private self. While some fans clearly feel this makes her more relatable, to me #ThugMarilyn is as mythical as the ‘dumb blonde’ character she  sometimes played in movies. Furthermore, I’m not sure Marilyn  would have wanted to be associated with violence and crime.

“Marilyn Monroe has lost her edge. Her sexual roles and nude Playboy pictorial made her one of the most controversial women of the 20th century, but the masses turned her once forbidden image into a backdrop for inspirational quotes posted on Pinterest and Instagram.

#ThugMarilyn posts cover Monroe in a 20th century aesthetic that opposes the sanitized version of her that appears on dorm room posters and alongside inspirational quotes, but it’s questionable how the hashtag associates tattoos and basketball jerseys with a dangerous coolness.

But the images of Monroe and Los Angeles have always been open to interpretation: Monroe played comedic roles while suffering from depression in her off time, and the underground has always lurked under the surface and around the corner from movie studio lots … Despite the dull quotes that millennials now attribute to her name, the underworld and hustling has always defined Monroe as much as her movie stardom—just like Los Angeles itself.

As much as #ThugMarilyn drawings rely on glaring stereotypes, their creators believe they’re bringing authenticity to Monroe’s life and legacy, which contain multitudes and contradictions. Monroe never flashed guns or paid for a tattoo sleeve, but her public persona consisted of playing dumb blonde comedic roles while navigating a tragic personal life and a sexuality the public deemed controversial.”