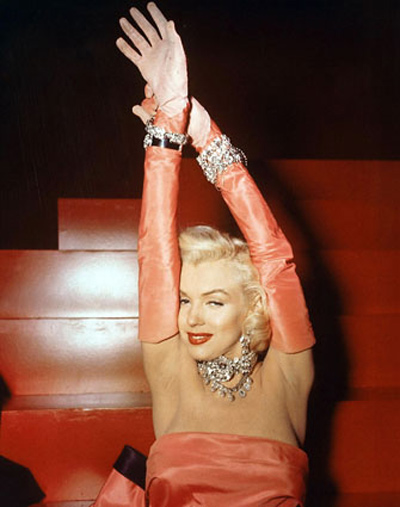 “When Arthur Miller shook my hand I could only think that this was the hand that had once cupped the breasts of Marilyn Monroe. I visited Jersey yesterday to see a small Marilyn Monroe exhibition in the Jersey Museum. It was part of a private collection assembled by a colourful local ratbag. The depredations of time had de-eroticised these famous garments, though some of the songs lisped by Marilyn were playing in the background. Alas, few of her fans know that they were mostly mimed by the actress and actually sung by Marni Nixon and Gloria Woods.”

“I don’t know about Gloria Woods but that isn’t right about Marni Nixon, who inserted the high notes Monroe couldn’t reach in ‘Diamonds are a Girl’s Best Friend’ from Gentlemen Prefer Blondes– sounds to me as though the whole introduction and maybe a few notes at the end are Nixon not Monroe, whose voice is appealing but very different. But the main part of the song is definitely Monroe.”