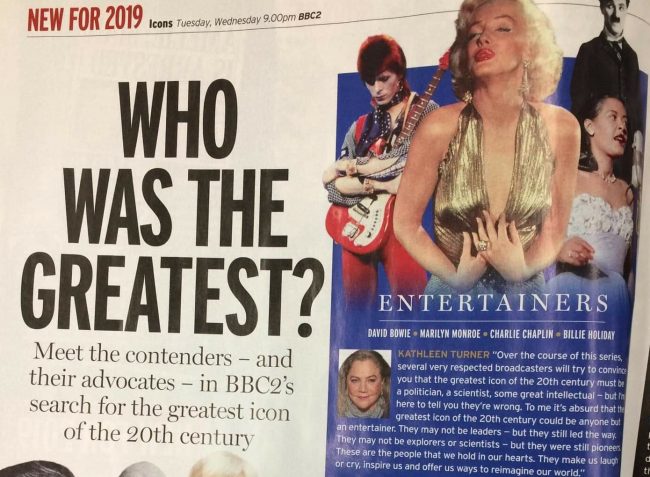 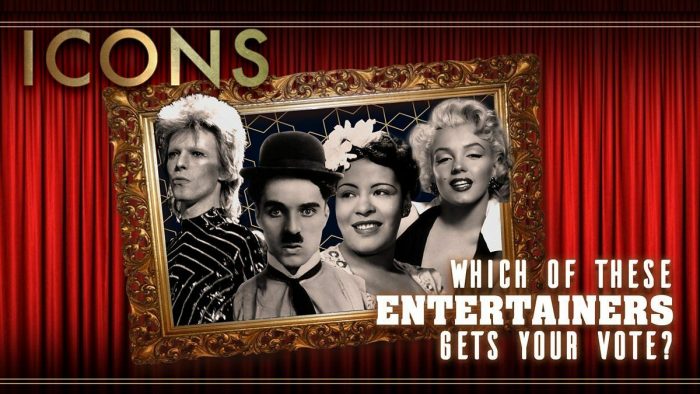 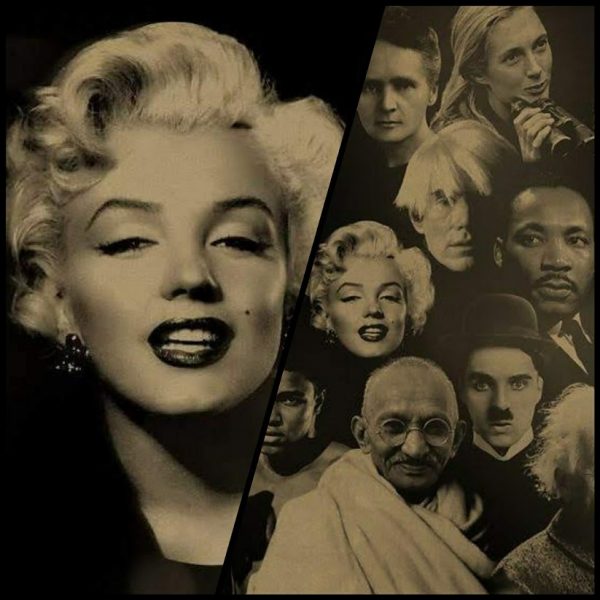 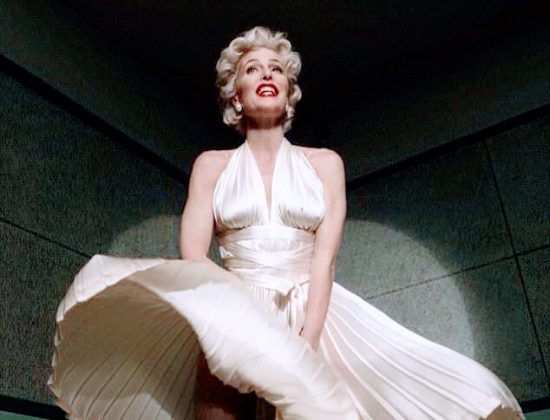 As reported here last summer, Gillian Anderson has appeared as Marilyn for her ‘Media’ role in ‘Lemon Scented You’, the fifth episode of American Gods, a new sci-fi series on the US Starz channel. While Gillian may not resemble Marilyn physically (I was reminded of another Hollywood icon, Barbara Stanwyck) her performance has been praised by both critics and fans of the show. Morit Chaplynne  reviews it on Culturess:

“The two best things about this episode are Gillian Anderson and Gillian Anderson. Sure, Shadow —and us along with him — manages to learn a little more about his new weird reality, and that’s definitely interesting. But Gillian Anderson appears as both David Bowie (in the teal Ziggy Stardust suit with the short red hair) and as Marilyn Monroe (in the iconic white dress from The Seven Year Itch) and it is everything.

Back at the police station, they lock Shadow and Wednesday in an interrogation room … Someone unlocks the door. It’s not the cops. It’s Marilyn Monroe.

Media floats into the room and speaks to them in a breathy whisper. Shadow asks Wednesday to tell him it isn’t real. He does not. The mysterious Mr. World enters the room, all overcoat and fedora, apologizing to Wednesday for not reaching out ages ago, but he hadn’t seen him.

Wouldn’t you like an upgrade? A brand new lemon-scented you?

Media gives an extensive sales pitch. Wednesday wants no part of it. He smells a con. When he laughs in Mr. World’s face, Media blows him a high-powered kiss that knocks out his two front teeth and leaves his mouth bloody.” 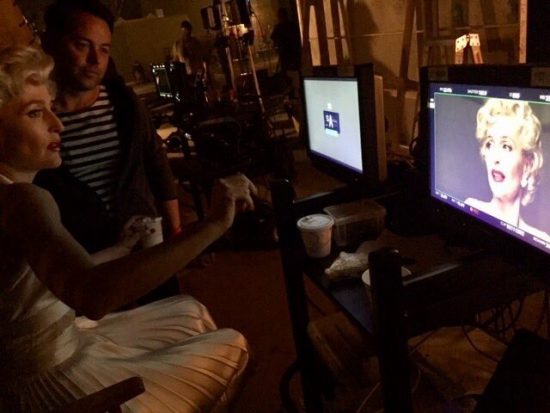 In an interview with Entertainment Weekly, Gillian talks about her multifaceted role:

“I didn’t know all that much about Marilyn as much as we all know what’s in the greater consciousness: the key pieces of her death and her struggle and her marriage and all that. And actually, I was surprised at how easy I found it to immerse myself in that and how much fun it was. She was definitely the one I had the most fun doing, just because there’s an imminent joy to her. There is also with Judy [Garland], but there’s something so delightful and delicious about Marilyn that was a lot of fun to jump into. And there’s a mechanism that we used to get her floating — I was on this robotic contraption that had been built with fans in it so that my skirt was constantly moving, even though they were going to recreate and enhance some of that in CGI. So for the majority of that scene, it was me being driven around via remote control with fans blasting vertically up my dress. So, that was fun.

The fact that [Media] does manifest as male and female and however Bowie might identify himself… I mean, certainly, you say ‘worship,’ and Michael Jackson was worshipped as much as any female icon we’ve ever had. Actually, we discussed Michael Jackson at one point as a character I might do, and Prince. But to me, what was important for Media, male or female, was that we got to see that the women, the female gods, and the females in general are and can be as powerful as the male gods and the men [on the show]. That they are equal. I guess it makes sense that one of the most powerful gods in the story is embodied as female.”

A new stage revival of Terry Johnson’s Insignificance (which was famously adapted for the screen in 1985), starring Sophie Melville as Marilyn, is currently playing at Theatr Clywd in North Wales until October 15, reports the Chester Chronicle.

Sophie said: ‘I’m thrilled to wear the white dress and play the part of Marilyn – it’s a dream, it really is. It’s been hard work because it’s the first time I’ve played a character who is a real person.’

‘I’ve tried to take on her quality but at the same time make the part my own rather than try to impersonate her. The main thing was getting the voice right and once I’d got that everything just fell into place.’

The show’s director Kate Wasserberg returns to Theatr Clwyd following her production of [Arthur Miller’s] All My Sons last year.

She said: ‘Insignificance is a play I’ve wanted to direct since I saw it at my local theatre when I was 12 or 13 years old. My dad took me along and thought we were going to see The Kiss of the Spiderwoman but it wasn’t on.

‘Even though I was very young, there are several moments from the play that are seared into my memory. I remember laughing a lot. It’s a play about politics, life, love and the stars. Terry Johnson’s work is incredibly intelligent, it works on several levels at once but, line for line, it’s properly funny. I read his plays and laugh out loud.'”

“This latest rather spiffing theatrical production directed by Kate Wasserberg in Mold demonstrates just how on several levels the confrontations and verbal jousting between the protagonists still has potent relevance that surprises and amuses.

It is in many ways an emotional rollercoaster particularly when embracing the emotional fragility and conflicts that shaped the relationship of Monroe and DiMaggio, never mind the manic nature of McCarthy whose demonising of America’s intelligentsia leaves a stain on that country’s contemporary history.

And Einstein, branded a Soviet stooge, was himself vulnerable and is here played with considerable aplomb by Brendan Charleson.

Wasserberg has completely nailed the essence of Johnson’s work, which is enhanced by a really top-notch cast: there is a chemistry that fizzes like a sparkler between all four participants and each has that magnetic attribute that engrosses those watching.

Sophie Melville, relatively fresh out of drama school, is simply sublime as Marilyn … here is – if you’ll pardon the pun – a pitch-perfect portrayal of Monroe’s passionate if rather unsophisticated spouse Di Maggio by Ben Deery.

The play begins, in this instance, with the soundtrack of David Bowie’s ‘Starman’, which under the circumstances is most appropriate … This is the kind of production that emphasises how live, breathing theatre, more so than film, can captivate an audience and keep them gripped to the last fading light.”

One of the few modern stars to achieve mythological status on a par with MM, David Bowie died this week. The above photo was taken in 1975, when Bowie was living in Hollywood, by Tom Kelley – most famous as the photographer of Marilyn’s ‘red velvet’ nude calendar.

Back in November 1972, Bowie released ‘The Jean Genie‘, which includes the line ‘Talkin’ ’bout Monroe and walking on Snow White’. The single reached No 2 in the UK, and also features on Bowie’s 1973 album, Aladdin Sane. A film clip was also released, portraying Bowie as his Ziggy Stardust persona, and model Cyrinda Foxe (in whose apartment the song was written) as a ‘consort of the Marilyn brand.’ 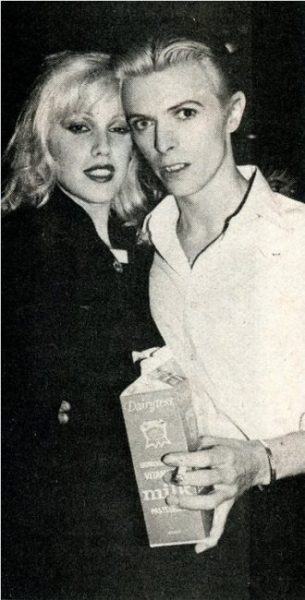 Dean Martin’s former wife and a friend of Marilyn, Jeanne Martin, compared her with Bowie in an interview with Anthony Summers for his 1985 book, Goddess: The Secret Lives of Marilyn Monroe. Jeanne captures the chimeric nature of our most beloved stars, but as Summers admitted, Marilyn ‘was much more than a Poster Person’ – and so, of course, was David Bowie.

“I call them the Poster People. They’re the most durably famous, yet in many cases they have nothing to them. You find them only through the roles they play in their films. I am not an uncompassionate person, but look at the way they were. The Montgomery Clifts, and the Marilyn Monroes, Elizabeth Taylor and David Bowie. In life they attract each other. They meet socially, they rush straight at each other, but they have nothing that means anything to mortals. History jettisons them forward into time, and I find their portraits on my son’s bedroom wall, pale and beautiful, but lost to reality.”