We’ve already heard about Marilyn’s Scottish ancestry (see here), but as Craig Williams reports for Glasgow Live, local art pioneer John McHale was inspired by Marilyn – while his London-based colleague Richard Hamilton featured her iconic pose from The Seven Year Itch in an early installation, as shown above – long before Andy Warhol made her his muse.

“The Maryhill area of Glasgow can lay claim to a few things of note … But few would ever imagine that it could hold claim to a title many might believe is held by New York – that of being the birthplace of Pop Art. It wasn’t Warhol who could be considered as the true ‘forefather’ of Pop Art, nor indeed did he coin the ubiquitous term we all know today thanks (in the most part) to his work. That belongs to the almost forgotten Scottish artist, art theorist, sociologist and future studies searcher John McHale – a man born and bred in Maryhill.

McHale coined the term ‘Pop Art’ back in 1954 to describe the aesthetic expressed in art in response to the commercialization of Western culture … Yet it was to be the groundbreaking and hugely popular This Is Tomorrow exhibition at Whitechapel Gallery in London in 1956 that would light the Pop Art touchpaper. The exhibition – which McHale played a central part in – was described by esteemed art critic Reyner Banham as being the ‘first Pop Art manifestation to be seen in any art gallery in the world’. McHale, alongside Richard Hamilton and John Voelcker, presented images from popular culture from magazines, film publicity posters and comics as part of the exhibition.

And as part of the exhibition, McHale was able to provide plenty of the material, having returned from a scholarship at Yale University with a black metal trunk full to the brim with magazine clippings … Yet it wasn’t until 1962 when Pop Art was effectively ‘rubber-stamped’ in the America psyche via the “Symposium on Pop Art” at the Museum of Modern Art in  New York – the same year that a certain Andy Warhol held his first ever solo exhibition in the city … Warhol’s exhibit featured some of his most well-known works, including ‘Marilyn Diptych’ … which repeated Marilyn Monroe’s image to evoke her ubiquitous presence in the media – it’s very possible that Warhol was inspired to produce the work by none other than Maryhill’s own McHale.

That’s because, in a collection of writings concerning popular imagery and fine art called ‘The Expendable Icon’ published in Architectural Design magazine in 1959, McHale referenced Marilyn Monroe in a section entitled ‘The Girl With The Most’. Monroe, who McHale regarded as ‘doubly interesting’ featured among many popular ‘ikons’ he identified alongside Elvis Presley – another of Warhol’s subjects. McHale wrote that the film star was ‘held up as an example of someone not only defined by personal iconography, but whose image is saturated in the media to such an extent that she serves as a model for universal imitation’.

1962 would see McHale emigrate to live in the US for definite … John McHale (Jr.) notes the difference between his father’s work and that of Warhol. Where Warhol was focused on being a celebrity artist, McHale’s agenda was to extend the boundaries of art to the masses according to his son … Incredibly, his father was also asked to explain his Pop Art ideas by Time magazine and be featured on the cover, but ‘regrettably refused for personal family reasons … From my discussions with my father it was apparent that he originally conceived of Pop Art as being more than just some glib advertising and reflection of popular culture … This may not seem radical in the present century, but half a century ago these were fighting words and cutting edge concepts. Pop Art was about opening up aesthetic possibilities and making art freely available to all …'” 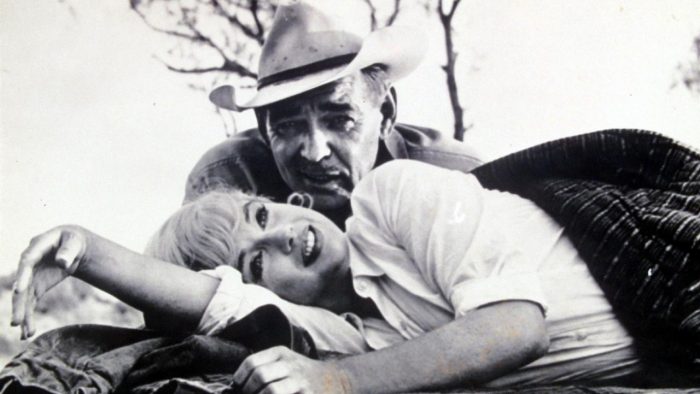 The Misfits is being reissued in selected UK and Irish cinemas from today. Here are a selection of reviews:

“The occasion for this restored re-issue is the BFI’s full Monroe retrospective: this is the pained capstone to her mere ten years of stardom, and surely her deepest, most torn-from-the-soul performance … When Gay calls Roslyn ‘the saddest girl I ever met’, the line springs out as the most direct and insightful ever spoken to Monroe on screen, and she reacts to it as if the truth had been grasped at last. The film gets her totally, and despite all the delays and the hospitalisations and the marital spats which made production such a nightmare, she gets it back. After one lengthy hiatus in rehab, [Russell] Metty had to use soft focus to disguise her poor health, which makes her face swim fuzzily in the centre of the screen at times, and this is somehow perfect for a character so unsure of herself.” – Tim Robey, The Telegraph

“Its merits and significance have been exhaustively documented over the years, but The Misfits still has a lot to show us about how we should approach Hollywood today … it‘s the vision of stardom’s pound of flesh. The notion becomes even more potent with Monroe. Marilyn was an idea conceived by several patriarchal forces; but you could see Norma Jean in every moment of her screen time; the sad, abused, ambitious woman struggling to negotiate the compromises of Hollywood – a battle between body and soul. We will never understand her furtive complexities, and that’s why we keep trying. She is the key to understanding so much of the context of the American cinema. When we write about Hollywood, we wrestle with supernovas; we can only catch the debris of their magnificence.” – Craig Williams, Cinevue

“For me, the film is itself a bit of misfit, full of big stagey speeches, contrived moments and some overemphatic performances, but opened out with muscular style by Huston. The faces of Gable, Clift and Monroe together in closeup have a Mount Rushmore look to them.” – Peter Bradshaw, The Guardian

“As the unexpected swan song for Monroe and Gable, it is marred by their death soon afterwards – but it also highlights their isolation in the world of Hollywood … the reason The Misfits is so thoroughly engaging, is because it often hints at a deeper truth. Huston has captured a moment of change and honesty. The story carries weight, as we know the depression and dependencies behind closed doors – and we only wish this wasn’t the final appearances of such unforgettable stars.” – Simon Columb, Flickering Myth

“It is instructive to read Arthur Miller’s account of the making of The Misfits in his autobiography, Timebends. In his account, the film sounds calamitous. His marriage to Marilyn Monroe was breaking up … Against the odds, she gives an extraordinary performance. It’s an artless one that at times seems phoney, but what she does convey in uncanny and febrile fashion is her character’s power of empathy, whether it is her sympathy for the cowboys (Clark Gable and Montgomery Clift) out of kilter with a modern, wages-based world, or for the wild mustangs they plan to kill.” – Geoffrey McNab, The Independent

“Bolstered by incredible, career-best performances from Monroe and Gable and the meticulous photography of Russell Metty, it’s a powerful and moving viewing experience. As Monroe and Gable ride off in their truck – neither would live long enough to make another film – they seem to leave behind Hollywood cinema as we know it.” – Tara Brady, Irish Times

“This reissue of what became the last film for both Clark Gable and Marilyn Monroe (Something’s Got to Give was unfinished) looks even starker and more jarringly isolated today than it did in 1961 … Monroe and Clift seem to be falling apart before our very eyes, John Huston directs through a fog of bitterness and booze, and Arthur Miller’s script reeks of estrangement and misunderstanding – both literal and literary.” – Mark Kermode, The Observer

You can also listen to Mark Kermode’s review for BBC Radio 5 Live here.