British author Matthew Smith’s Victim: The Secret Tapes of Marilyn Monroe (2003) was an update of his 1996 book, The Men Who Murdered Marilyn. After a further US release, Marilyn’s Last Words (2005), Victim remains in print and on Kindle – proof, if nothing else, that scandal will always find an audience. (Smith has also written books about the assassination of President Kennedy.)

Victim, like Smith’s other Monroe books, is based on the alleged tapes she made for Dr Ralph Greenson. However, the tapes have never been found, and Smith (along with other authors) relied on the memories of John Miner, an assistant to the prosecuting attorney during the original investigation into Marilyn’s death, who claimed that Greenson had played him the tapes. Miner created the ‘transcript’ decades later.

In 2005, Melinda Mason wrote ‘Songs Marilyn Never Sang‘, an article disputing the credibility of the Miner transcripts, for her MM and the Camera website.

“Published in 2003, Victim is already more than ten years old, but the content could’ve been from the 1970s or 1980s…I’m skeptical of the legitimacy of Monroe’s words because of a point Smith makes himself throughout this book, on more than one occasion. He admits and argues how easy it is to splice tapes together, to form sentences and thoughts that weren’t originally intended. There were a few moments when Monroe’s statements felt orchestrated, conveniently sexualized or titillating. I could be completely wrong, but that is my interpretation – forever the pessimist.”

Actor Robert Wagner is now 84, and still busy – both onscreen, and in print. He began his career at Twentieth Century-Fox in 1950.

On June 14, 1951, Wagner made a screen test alongside one of the studio’s most promising starlets. “I was the guy they always used when the studio was making screen tests of new actresses,” he told author Warren G. Harris in 1988. “And believe me, no job is more dead-end than that. The only interesting thing that came out of it was when they were testing a new kid and asked me to do a couple of scenes with her. Her name was Marilyn Monroe.” 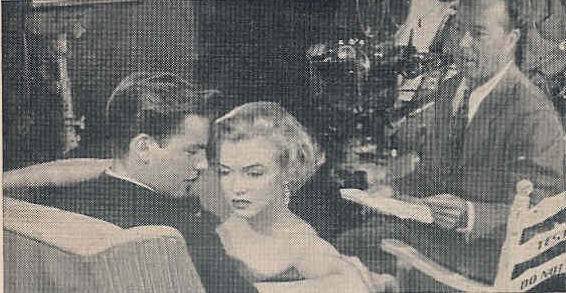 On the strength of this test – a love scene – Wagner was cast alongside Marilyn in a romantic comedy, Let’s Make It Legal, starring Claudette Colbert. The pair never acted together, but became friends and were often pictured together at Hollywood parties. Wagner, who had affairs with many beautiful actresses, was never romantically involved with MM. 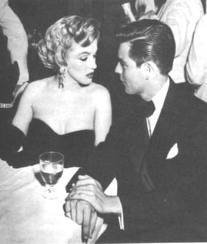 “Nothing happened easily for Marilyn,” he said later. “It took a lot of time and effort to create the image that became so famous.”

In recent years, Wagner has published two books: Pieces of My Heart (2008), an autobiography; and the just-published You Must Remember This, a memoir of Hollywood’s golden age, in which he recalls Marilyn’s tragic death.

“It’s odd how your mind associates certain people with certain events. In August 1962 I was in Montecatini, Italy, the same time as Sheilah Graham [the Hollywood gossip columnist.] I was on the terrace of my hotel when she leaned out a window and yelled, ‘Marilyn Monroe died! Marilyn Monroe died!,’ to the world at large, in exactly the same way she would have announced that her building was on fire. That was how I found out that the girl I had worked with twelve years earlier, and who had since become a legend in a way nobody could have foretold, was gone.”

Wagner is no stranger to tragedy. His wife, Natalie Wood, drowned in 1981 during a yachting trip. Her death, like Marilyn’s, is the subject of endless speculation.

Natalie was the child star of Marilyn’s first film, Scudda Hoo, Scudda Hay! She admired Marilyn, and spoke with her at a party weeks before her death.

Natalie married Robert in 1957 and they divorced five years later, but were remarried in 1972. There are shades here of Marilyn’s relationship with Joe DiMaggio, who had grown close to her again in the years before her death.

Dr Thomas Noguchi, so-called ‘Coroner to the Stars’, performed autopsies on both women. He was demoted in 1982, after speaking too freely in the media about the case, and in that year’s reopened investigation of Monroe’s death. His career has since recovered, however.

In Pieces of My Heart, Wagner criticised Noguchi:

“Noguchi was a camera-hog who felt he had to stoke the publicity fire in order to maintain the level of attention he’d gotten used to. Noguchi particularly enraged Frank Sinatra, who knew the truth and, in any case, would never have allowed anyone who harmed Natalie to survive.”

Natalie’s case would also be reopened in 2011, when the captain of the boat claimed that a fight with Wagner had led to her drowning. The official cause of death was later amended from accidental drowning to ‘drowning and other undetermined factors.’ Wagner was ruled out as a suspect.

In You Must Remember This, he speculates on the proliferation of conspiracy theories in the internet age:

“Intellectually, I understand the perception that the rich and privileged are invincible. That’s why some people need to believe, for example, that Marilyn Monroe was murdered by the Kennedys…The randomness of life and death can be terrifying, so a certain kind of person seizes on minor discrepancies of memory or the garbled recollections of marginal personalities to cast doubt on a reality they don’t want to acknowledge.”

One of Marilyn’s favourite New York hangouts was the Plaza Hotel, where in February 1956, she held a press conference with Sir Laurence Olivier – and, much to his amazement, chaos erupted when the strap on his co-star’s dress broke!

John F. Doscher, a bartender (or ‘mixologist’) at the Plaza during the fifties, remembers Marilyn and other stars in his new book, The Back of the House, reports Hernando Today.

“Take for instance his va-va-va voom encounter with Marilyn Monroe. The starlet stayed at the hotel numerous times.

Doscher said he was awestruck by the entourage of photographers, hair stylists and makeup artists accompanying Miss Monroe each time she came in.

‘They were from Life, Look and Photoplay magazines, all there for photo opps, he said, early paparazzis, you know?’

One day Monroe was having a late breakfast in what was the Edwardian Room and sitting by the window overlooking Central Park South. A few tables away with her back to Monroe sat Plaza-regular New York newspaper columnist, Dorothy Kilgallen.

Working the bar that day in the Edwardian, Doscher mentioned to Kilgallen that Monroe was sitting by the window. Kilgallen, he said, ‘Let out a “harrumph” and said, ‘Yes. I saw her. She looks like an unmade bed.’

‘Apparently, there was some animosity there,’ Doscher observed. ‘I mean, Marilyn Monroe has been described many ways in her lifetime, but never the description Kilgallen offered.'” 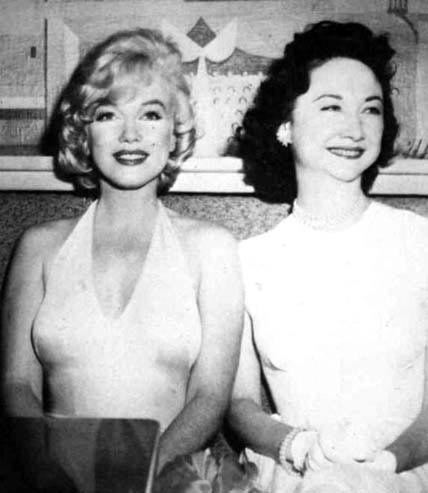 Dorothy Kilgallen was a syndicated newspaper columnist. In 1952, she reported that journalist Robert Slatzer was a rival to Joe DiMaggio for Marilyn’s affections. (Slatzer has since become a notorious figure in Monroe history, and biographer Donald Spoto considers him a fraud.)

After Gentlemen Prefer Blondes was released in 1953, a sceptical Kilgallen wrote to Darryl F. Zanuck, asking him to confirm that Marilyn’s singing was her own voice, which he did.

Needless to say, none of this endeared her to Marilyn, and in his essay, A Beautiful Child, Truman Capote wrote that MM had described Kilgallen as a drunk who hated her.

Kilgallen lived near the summer house where Marilyn and Arthur Miller stayed in 1957. In 1960, she was photographed with Marilyn at a press conference for Let’s Make Love.

Just days before Marilyn died, Kilgallen alluded to the star’s affair with a prominent man in her column. In the following weeks, she tried to investigate the circumstances behind Monroe’s death – particularly her alleged links to the Kennedy brothers.

In 1965, 53 year-old Kilgallen was found dead in her New York apartment, having overdosed on alcohol and barbiturates, and also having possibly suffered a heart attack.

However, some conspiracy theorists think Kilgallen was murdered, because of her critical comments about the US government.

The 50th anniversary of Marilyn’s death in August has, perhaps inevitably, led to yet another wave of speculation. As Maureen Callahan writes in the New York Post, ‘the hot trend in publishing is making sure the famous didn’t die of natural causes.’

“Though hard to quantify, our obsession with homicide has seemed to grow exponentially over the past couple of decades: Turn on the television any given night, and there are at least a few hour-long procedurals involving grisly homicides on the air — so reliable in formula and execution they almost take on the coziness of chicken soup. The true-crime genre has cut across age, class and education levels since its introduction in the 18th century; in the 20th, Truman Capote’s ‘In Cold Blood’ and Norman Mailer’s ‘The Executioner’s Song’ brought into focus the true nature of our fascination, which lays with the murderer, not the victim.

True crime, however, is infinitely more popular among women than men, and David Schmid (a professor at the University of Buffalo specializing in true crime and celebrity) reports far more females than males in his classes.

He thinks it may be ‘pedagogical — women are looking for a way to negotiate the fear of being a victim and can take [warnings] from what the victim did to make themselves vulnerable. Stories help with that.’

And stories in which we spin out elaborate theories to explore the deaths of celebrities may, in the end, simply be our crudest yet best efforts to make sense of the greatest mystery of all. ‘We attempt to read mysteries into everything, because with that comes the notion that there are answers to be found,’ says Schmid. ‘That life isn’t as random and meaningless as it can seem, but there’s a pattern to events — and if we can decode those, we can arrive at the answer and prove there’s a point to it all.'”

Robin Ramsay casts a sceptical eye upon one of the more exotic conspiracy theories linking Marilyn with JFK and UFOs in The Fortean Times, in response to allegations recently made in the UK’s Daily Mail.

In his article, Ramsay traces the Monroe connection to journalist Dorothy Kilgallen, who knew Marilyn professionally throughout her Hollywood years – though they were not close friends – and was one of the first to investigate the Kennedy rumours after her death.

However, the rumour appears to be based on documents compiled by Majestic 12, a secret committee formed at the orders of President Harry S. Truman in 1947, after the Roswell Incident. The FBI has since declared documents authorised by MJ-12 ‘completely bogus’ – though UFO enthusiasts will disagree.