The touring exhibition, Marilyn: Celebrating an American Icon, comes to Fort Collins Museum of Art in Colorado from November 1-December 27, reports The Coloradoan.

‘It takes you on a little journey through Marilyn’s life, presented from the perspective of our perception of her,’ Lorenz said.

The show, a smaller part of an earlier international tour, is divided into several stages — showcasing her changes from her early years as a wholesome, girl-next-door model to a sex symbol and her marriages to Joe DiMaggio and Arthur Miller; a section on her movie career including film stills from The Misfits and Some Like it Hot; and a look at the cult of celebrity that was created around her.

‘You really see in each of these, a lot of her and her vulnerability,’ Lorenz said.

Paintings by artists like Andy Warhol also examine Monroe via a different viewpoint.

‘The way they are presented really does show how we, as a public, have responded to her,’ Lorenz said. ‘They show her via her appreciation as this icon of American culture… It’s not so much about her, but the societal and cultural response to her.’

Lorenz said the show is a strong reflection of the cult of celebrity that began at the time and has continued on to today, as well as a reflection of one of the world’s most beautiful women.

‘She was gorgeous and never took a bad picture.'”

Eric Kohn has reviewed Love, Marilyn – Liz Garbus’s upcoming documentary based on Monroe’s personal writing, as collected in the 2010 book, Fragments – for IndieWire. (It was screened this weekend at the Telluride Film Festival in Colorado.)

“In its opening minutes, the documentary Love, Marilyn establishes a gimmick that seems destined to fail: Chronicling the rise and fall of Marilyn Monroe, director Liz Garbus unleashes a collection of movie stars who mainly read excerpts from her personal diaries throughout the film. Watching these contemporary faces dramatize Monroe’s attitude initially creates a grating disconnect from the subject matter. Over time, however, the approach blends into an immersive account of the actress’ career that both deconstructs her celebrity while interrogating its impact on her troubled existence.

Not content to let the actors carry the whole movie, Garbus also includes interviews with Monroe acquaintances and scholars as well as rare archival footage.

Attempts to explore Monroe’s off-screen persona in narrative form, including last year’s My Week With Marilyn and Nicolas Roeg’s Insignificance, tend to embellish on the actress’ personality by nature of their interpretative format. Love, Marilyn achieves greater clarity by letting the actress lead the way. As her struggle congeals, the collection of performances gain a strong justification: For over a decade, the actress battled to reconcile her public image with her true self. Sifting through the many faces that play her in Love, Marilyn, so must we.

HOW WILL IT PLAY? Destined for distribution with a company that can play up its potential on VOD, “Love, Marilyn” is also likely to find warm reception at numerous film festivals. Its next stop is in Toronto.”

Aspen, Colorado – most famous as a luxury ski resort – is also home to a fan-made Marilyn shrine, reports the Snowmass Sun:

“The Marilyn Monroe Shrine on Aspen Mountain was the first — and for a long time the only — shrine dedicated to a woman. Up until around March 2008 it had been somewhat neglected. There was only one photo of her there, and the shrine was in danger of disappearing. However, around that time, Curtis Broek, of Urbandale, Iowa, took it upon himself to resurrect and restore the shrine.

He enlisted some of his friends to help him update the shrine, and now it has many famous photos of Monroe, including ones from Playboy magazine and a couple of Andy Warhols, and it also includes a large clock with an image of Monroe on its face, a Monroe thermometer, two poems she wrote, a Monroe quote dealing with face-lifts, some Monroe banners and a bouquet of red and white roses with pearls.

One of the laminated photos there shows Monroe playing golf. One of the first items put up in the shrine was a large bra. That bra is long gone, but since then, others have been put up, and recently a lacy red bra was attached to a tree. The shrine was updated again around February 2010.”

It’s well-known in Durango, Colorado, that the then up-and-coming actress, Marilyn Monroe, visited the town in 1949 to film a small role in the comedy Western, A Ticket to Tomahawk. But did you know that MM returned a year later, during filming of another Western, Across The Wide Missouri, starring none other than her idol, Clark Gable?

Interestingly, Across the Wide Missouri was released in November 1951, on the same week as another early Monroe film, Let’s Make it Legal.

“So, what was she doing in Durango in 1950? She has no credited role in Across the Wide Missouri. She could have been trying to land a role, or trying to catch someone’s attention. Clark Gable was among her favorite actors – maybe she was observing.

‘As I remember, she liked Durango and had a great time here (during Ticket to Tomahawk) and wanted to come back,’ Hogan said.

A major battle scene between the mountain men and the Native Americans was shot by Andrews Lake near the top of Molas Pass. That’s where he became acquainted with Monroe.

The topsoil around Andrews is a spongy peat moss that is flammable, Hogan said. Most everyone on the crew and the hordes of spectators were smokers, creating a potential fire danger. Hogan traveled on a horse with a fire extinguisher, putting out any smoldering spots in the peat moss.

Monroe asked if she could join Hogan on his rounds, and she was set up with a horse and fire extinguisher of her own.

‘People got bored to death,’ Hogan explained. ‘And that’s where Marilyn got involved with me and putting fires out. She didn’t have anything to do. … She just enjoyed riding and doing something. It wasn’t any other reason she had.’

She joined him two or three times, and that was it: Hogan’s brush with Marilyn Monroe. He assumes she was just building her career and thought that people involved with the movie could help.

He also remembers Monroe visiting Hogan’s Store, and his father, Charles Hogan, waiting on her.

‘My dad was very attentive on providing her with (jeans) to try on,’ Hogan chuckled. ‘I never will forget that. I just laughed at my dad.'” 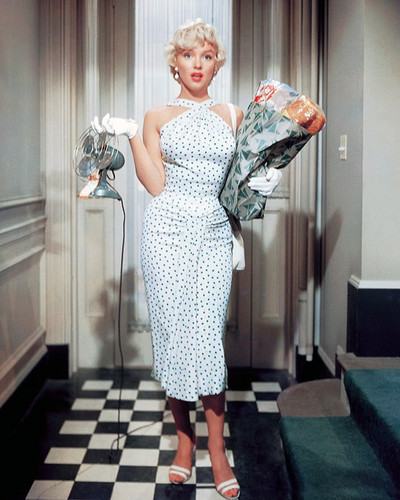 My plea for more screenings of The Seven Year Itch seems to be paying off. It is showing at the Mayan Theatre, Denver, Colorado, on June 14 (my birthday!) at 7pm. And Some Like it Hot follows on June 21. (Yet another coincidence: ‘The Girl’, Marilyn’s character in Itch, also hails from Denver.)