Frank Sinatra’s relationship with Marilyn is the subject of an article in the current issue of US magazine Closer Weekly (dated July 1st, with Betty White on the cover), and is now reprinted in the latest issue of the National Enquirer‘s UK edition (also dated July 1, with Richard Gere and Julia Roberts on the cover.) 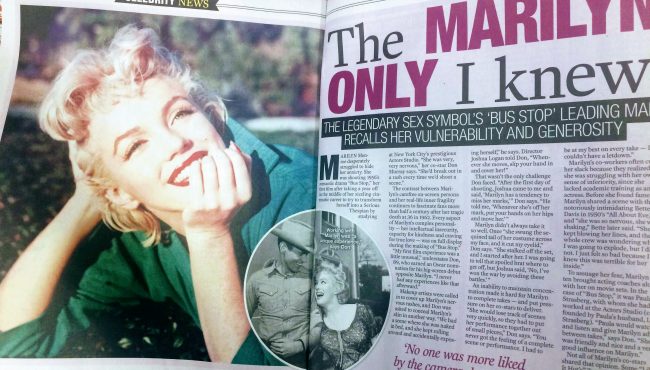 For British readers who may have missed out on the Don Murray cover story for US magazine Closer (more about the interview here), the article is reprinted in the current UK edition of the National Enquirer (dated May 13, with Britney Spears on the cover.) 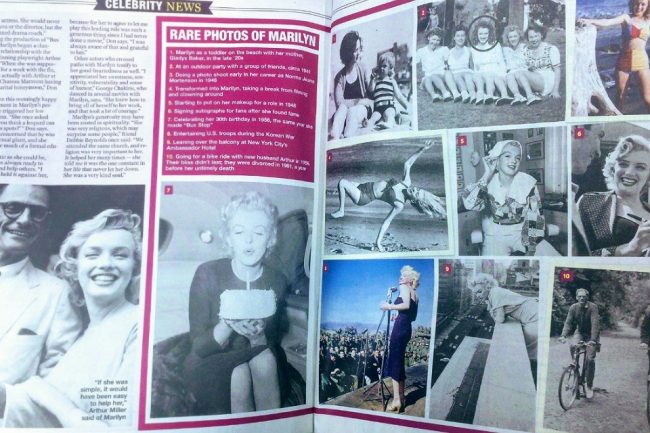 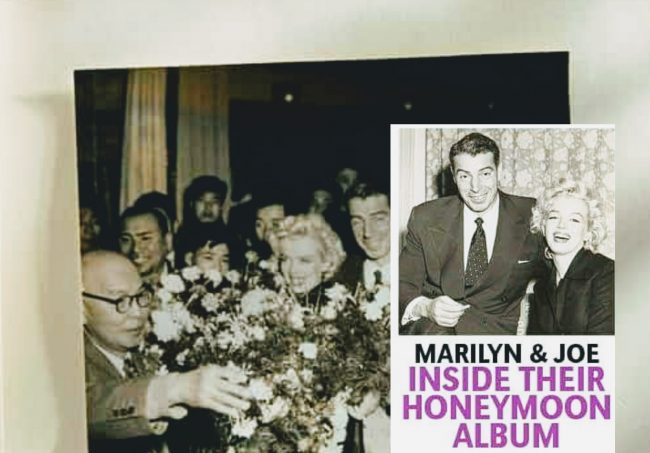 The ‘honeymoon album‘ gifted to Marilyn and Joe DiMaggio by Japan’s baseball league after their 1954 visit has been sold for $12,000 at Heritage Auctions. It is also the subject of an article in US weekly Closer (not to be confused with the UK magazine of the same name.) It’s dated March 4 with Vanna White on the cover, and can also be ordered here. 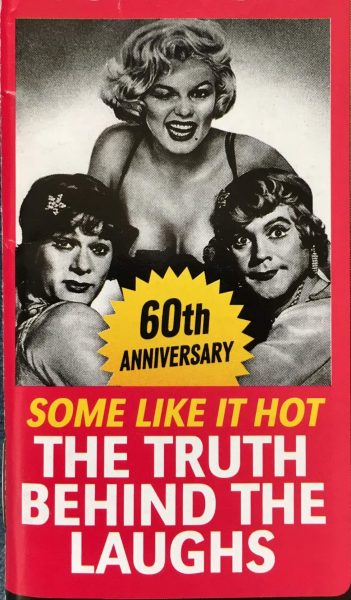 The 60th anniversary tributes to Some Like It Hot have already begun, with a look behind the scenes published in the Christmas 2018 issue of US weekly Closer (with Kathie Lee Gifford on the cover.) If you missed out, just click to enlarge the photo below. (It was posted on the Marilyn Remembered Facebook group by Christopher Lentz, author of My Friend Marilyn, a novel set at the Hotel Del Coronado during the legendary shoot.) 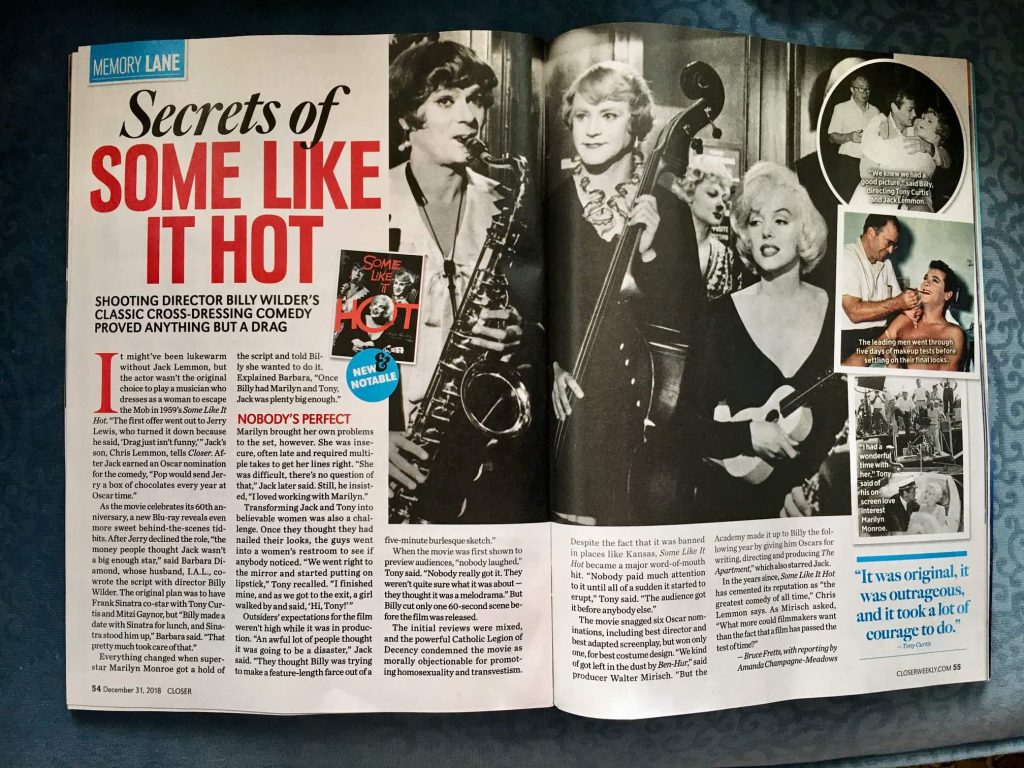 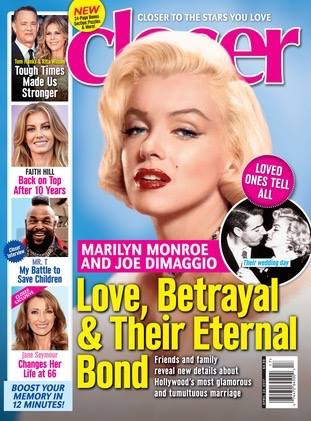 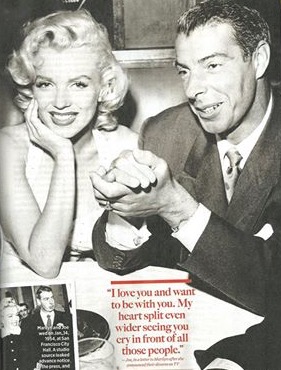 Rare photos from Limited Runs’ touring Red Velvet Collection exhibit – showcased alongside Tom Kelley’s nudes – are featured in this week’s Closer (US only), with George Clooney on the cover. 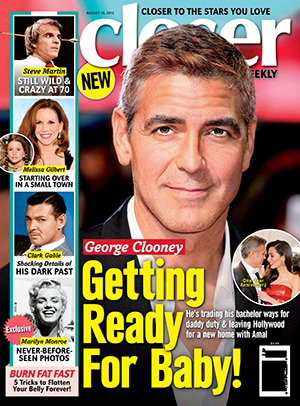 Here are a selection of rare photos from the exhibition, taken during filming of Gentlemen Prefer Blondes. 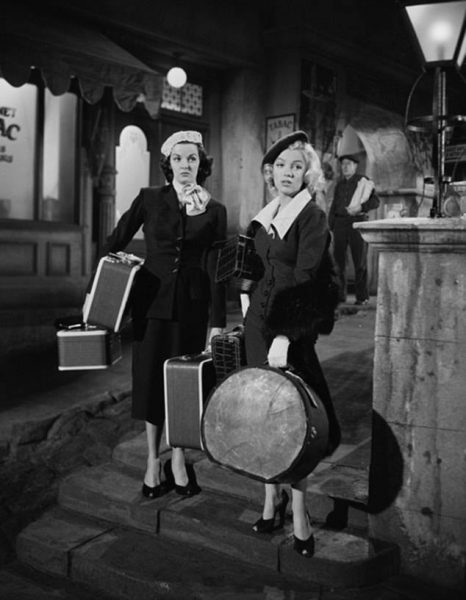 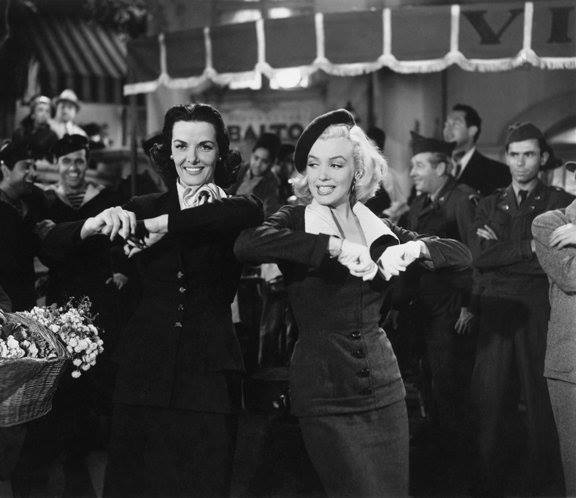 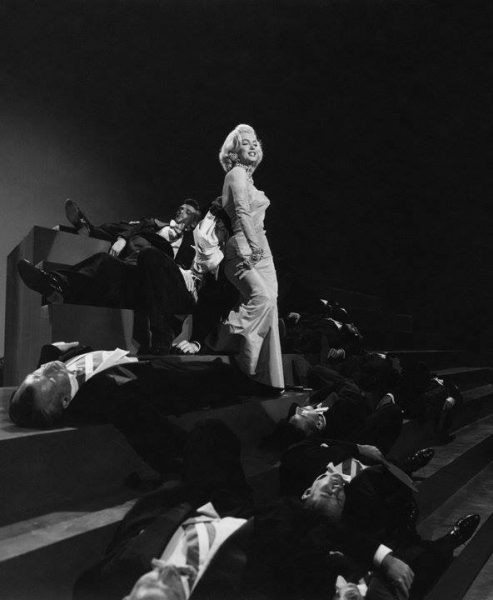 And a few more from Let’s Make Love. 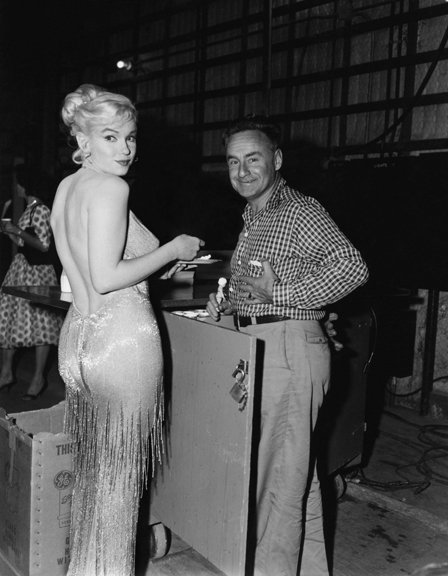 Marilyn graces the cover of two magazines (at least) this month. A pin-up shot from 1952 is used to great effect in Italy’s gay-friendly magazine, Pride, with an article by Giovanbattista Brambilla (author of the fan-favourite 1996 book, MM: The Life, The Myth) inside. ‘The Shadow of Marilyn’ explores Marilyn’s complex relationship with acting coach Natasha Lytess. 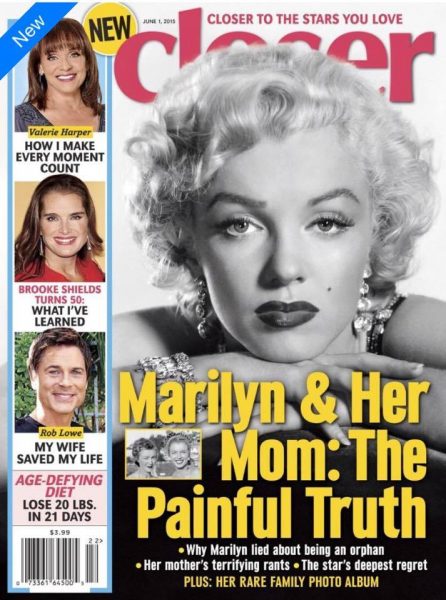 In the US, celebrity weekly Closer (no relation to the UK mag) makes Marilyn their cover girl from the third time in a year. Inside, an article about her fractured relationship with her mentally ill mother, Gladys, ties in with Lifetime’s upcoming mini-series, The Secret Life of Marilyn Monroe (to be broadcast stateside on May 30-31.)

Marilyn graces the cover of US magazine Closer for the second time this year (the first came out back in June), with an article focusing on the mystery of her death. UK readers please note, the eponymous British magazine does not feature the same content. If you want to purchase this issue, try Ebay.

“Only in the new issue of Closer Weekly, Marilyn Monroe’s friends and family insist that Marilyn did not take her own life, while a new book, Marilyn Monroe: Day by Day, reveals new details from the star’s diary and the days leading up to her death.

Marilyn had made plans for ‘the day after she died…She was going to see the producers,’ Marilyn’s niece Mona Rae Miracle tells Closer. ‘It was very clear the studio was going to rehire her,’ notes Carl Rollyson, author of Marilyn Monroe: Day by Day, a new book that reveals the most comprehensive account of her last days through a paper trail of hidden diaries and appointment books. ‘She was making plans for the future.'”

Still, 50 years after her death, many believe it wasn’t suicide at all, but a tragic accident caused by the actress taking too many sleeping pills. ‘If Marilyn had a sleeping pill at her side, she would always take it,’ Jimmie Morrissey, Marilyn’s hairdresser, reveals to Closer. ‘She was always taking pills. And she was always drinking champagne.’

But the self-medicating couldn’t completely take away her pain. ‘She was in a bad place mentally for a while,’ Sherrill Snyder, the daughter of Marilyn’s longtime photographer and close friend Allan ‘Whitey’ Snyder, tells Closer. ‘People were giving her pills because they needed her to perform,’ she says. ‘Unfortunately, Marilyn was surrounded by people who were less than vigilant’ about tracking her medication. ‘One thing led to another, but my father never believed it was suicide.'”