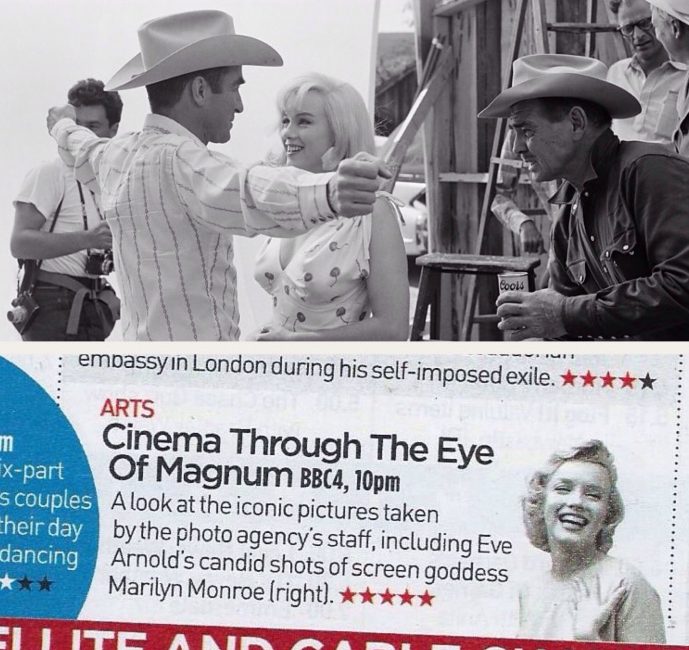 Cinema Through the Eye of Magnum, a new documentary about the legendary photo agency, will be screened for the first time in the UK tonight at 10pm on BBC4. This image, captured by Ernst Haas, shows fellow Magnum photographer Elliott Erwitt among the cast and crew of The Misfits.

“The Misfits was a pivotal moment in photographers’ relationship with cinema. Lee Jones, Magnum’s head of special projects in New York, decided that the film’s dream cast deserved special attention. Nine different photographers took turns over 3 months of the shoot to capture the ‘total chaos’ on what would be Marilyn Monroe’s last film.

Eve Arnold, Magnum’s first woman member, was Monroe’s trusted collaborator. Having previously worked with Marlene Dietrich and Joan Crawford, she started photographing Monroe when they were both relatively unknown. She spent two months on the set of the John Huston movie.

Photographer Bruce Davidson remarked, ‘Marilyn is really in torment – this was the movie where it all collapsed. And the hidden homosexuality, total neurosis, drugs, the whole works (on set). This film is a turning point, and the photographs document the disintegration of a system.’

Clark Gable had a heart attack the day after filming wrapped on The Misfits and died a few days later.”

Thanks to Nikki at Marilyn Remembered