The American painter James Francis Gill was one of the first Pop artists to feature Marilyn in his work (even before Warhol), and she still inspires him today. He will be making a series of personal appearances throughout April at selected branches of Castle Fine Art Galleries across the UK. 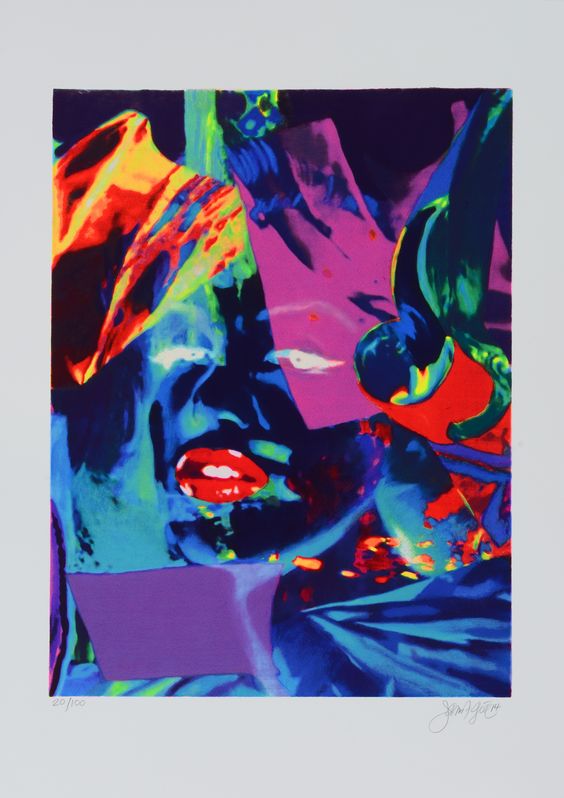 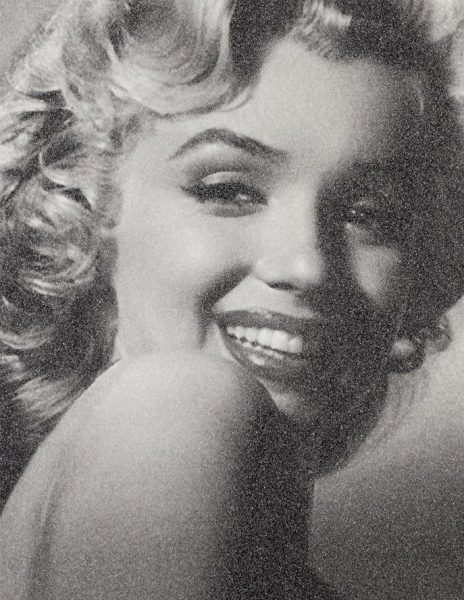 Commissioned by Twentieth Century-Fox, artist Simon Claridge’s images of Marilyn, coated in diamond dust, are currently on display (with prints for sale) at branches of Castle Galleries throughout the UK. 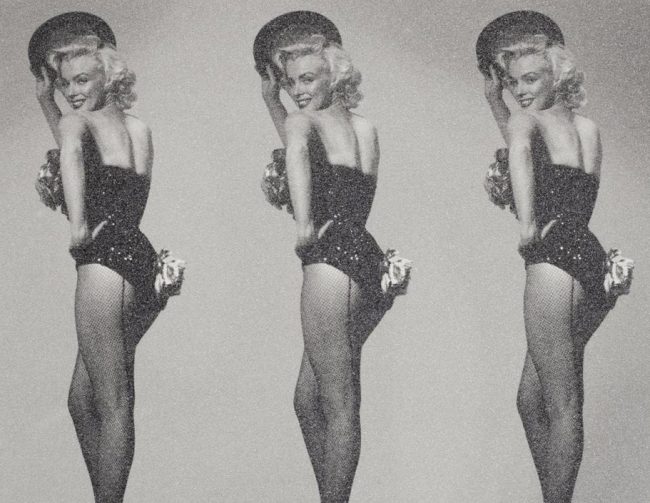 Marilyn is the subject of another dedicated magazine – the third this year – as part of the French ‘Etoiles du Cinema’ series. It’s widely available in France, 80 pages long, and is said to contain many photos though nothing really new. 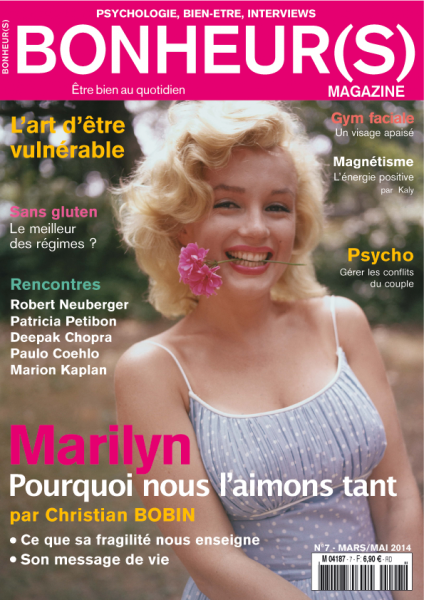 Also in France, Marilyn graces the cover of Bonheurs magazine, with a profile inside by author Christian Bobin (she is featured among other great women of history in his latest book, La Grande Vie.) 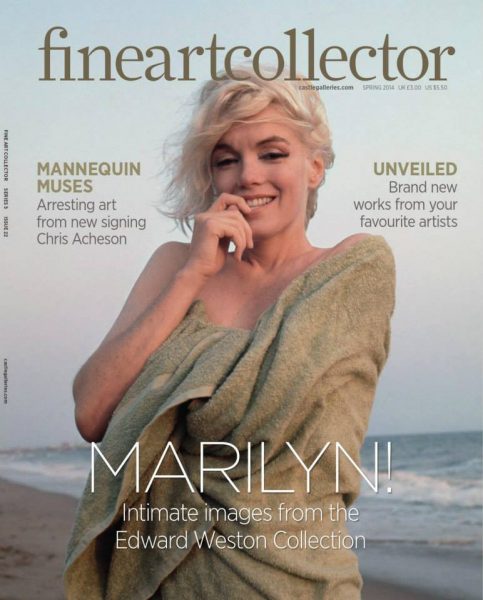 Across the English Channel, visitors to the current Castle Galleries exhibition should look out for Fine Art Collector magazine.

A portfolio of eight limited edition prints of Marilyn, taken from the Edward Weston Collection – including photos by Andre de Dienes and George Barris – can now be viewed (and purchased, if you can afford it) at branches of Castle Galleries across the UK, where brochures are also available. A review of the display can be read at Burlesque Bible. 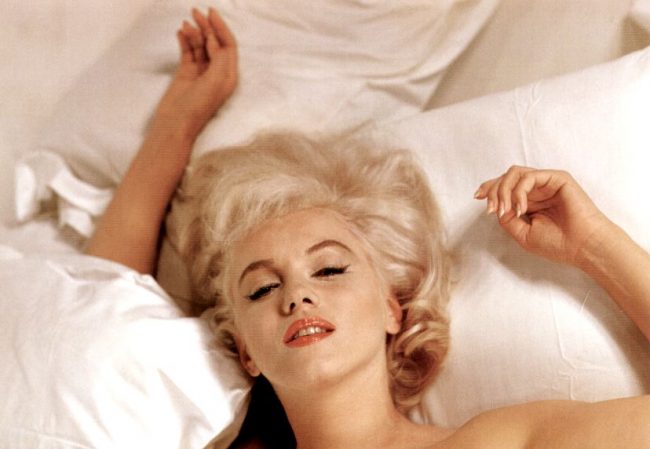 Leave it to Liz Smith, the first mainstream journalist to notice that the Eve Arnold prints at Castle Galleries, heralded by the media as ‘rare and unseen’, have all been published before.

“EVE ARNOLD, the great photographer, took many wonderful pictures of Marilyn Monroe over the course of six years. Eve, maternal and intelligent, was the only female photographer Monroe ever allowed. (MM was more comfortable with men, especially when doing her ‘thing’ for the still camera.) Eve has always spoken of Marilyn in the highest regard, as a photographic subject and as a sensitive human being.

Now there’s a collection of Eve’s prints up for auction. They are wonderful, but they are not, as widely claimed, ‘rare’ or unpublished. All have been seen over the years. The prints have been spiffed up from the original negatives but there’s nothing new.

Perhaps someday, the nudes Eve Arnold took of Marilyn during the famous 1960 slip/bikini session, will show up. (This was the session where Marilyn told Eve, ‘I want to look like Botticelli’s Venus rising from the sea.’ Eve, surveying the star’s zaftig curves, replied: ‘Maybe we should go for Rubens.’) The nudes – MM in bed – were stolen from Ms. Arnold’s studio decades ago and never recovered. 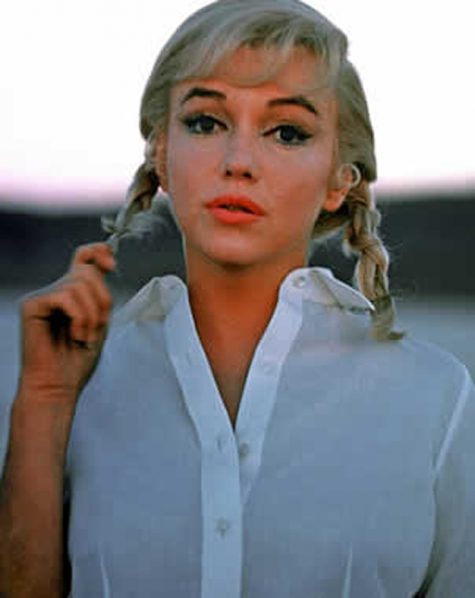 “Daft headline of the week: ‘Portraits reveal a playful side to Marilyn Monroe,’ said the heading on a news story, published on Tuesday, about some previously unseen photographs. It just about could have got away with ‘show’, but the word ‘reveal’ definitely implies that nobody has hitherto suspected that Monroe had a playful side. This headline was obviously written by one of the three people in the world who have not seen Some Like It Hot.” 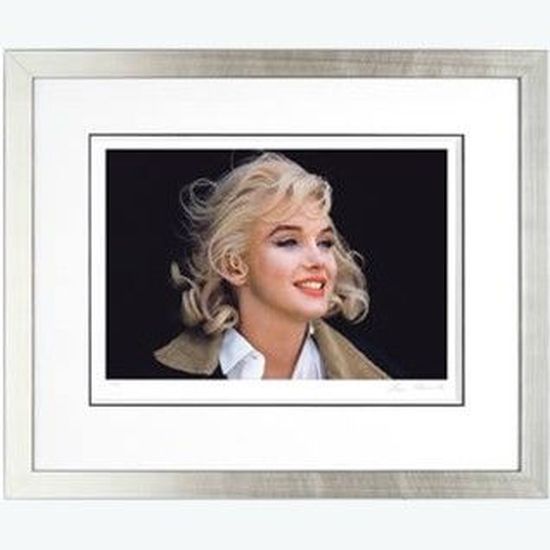 “I found myself to be in the privileged position of photographing somebody who I first thought had a gift for the camera, but whom, it turned out, had a genius for it.” – Eve Arnold on Marilyn