Marilyn’s Ford Thunderbird, sold for $490,000 at Julien’s in 2018 (see here), is listed among the top 5 cars owned by Hollywood legends on the Driving website today. Marilyn had a 1956 version of the car in Raven Black, loaded with a V8 engine that put out a cool 222bhp, propelling the car to 113mph. It was a gift from her business partner Milton Greene. They are pictured here en route to Marilyn’s civil wedding ceremony in June 1956, with husband-to-be Arthur Miller at the wheel.

The 1951 Nash Rambler Rolltop which Marilyn used at the Miss America parade in Atlantic City while promoting Monkey Business (1952) is featured in a new exhibition, Reel Cars: The Importance of Cars in Filmmaking, at the California Automobile Museum in Sacramento until July 6, reports NewsRadio KFBK. 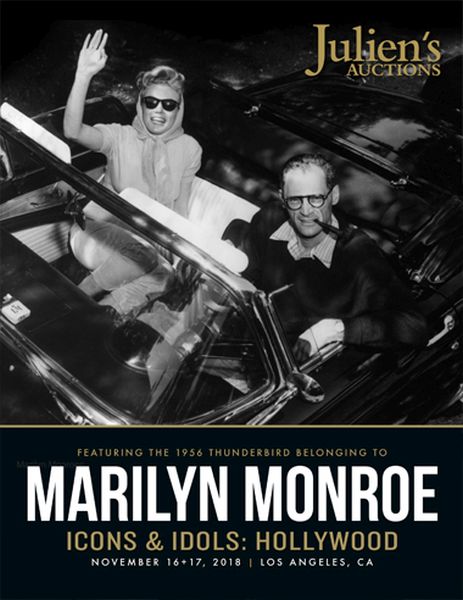 “A published report at the time suggests that Monroe and Miller drove this vehicle to their civil wedding ceremony on June 28, 1956 and likely their private wedding on June 30, 1956. It was a powerful car for its time, with a 225 horsepower V-8 engine and a top speed of 113 MPH. The car features a complete dual, through the bumper exhaust system, giving a deep throaty roar at speed–adding to its ‘va-va voom’ personality.”

In the New York Times, Winnie Hu looks back at the history of the ticker-tape parade car which made a brief appearance in How to Marry a Millionaire.

“It is not built for speed. It burns through gas. And it is too big to park on any street. But none of that matters when it is a 1952 Chrysler Imperial Parade Phaeton.

The open-air car in glossy black with red leather seats is New York City’s official parade car and the grande dame of the 30,000 vehicles in the nation’s largest municipal fleet. It stretches 20 feet from front to back to seat up to eight passengers, and it comes with its very own red-carpet floor. It has only one job: ushering V.I.P.s through blizzards of ticker tape on Broadway.

For more than six decades, its back seat has been filled with a who’s who of world leaders and celebrities … The 1952 Phaeton was one of only three that Chrysler made — part of a tradition of custom-made parade cars that once carried the newsmakers of the 1940s, ’50s and ’60s in grand style, all while showing off Chrysler’s latest design in the ultimate bit of product placement. No need to advertise with Queen Elizabeth II, John F. Kennedy, Neil Armstrong and Joe DiMaggio in the car.

The three Phaetons — each in a different color — were owned by the Chrysler Corporation, which based them in New York, Los Angeles and Detroit, and lent them out for processions around the country … The New York car made a cameo in the 1953 film How to Marry a Millionaire, starring Marilyn Monroe.” 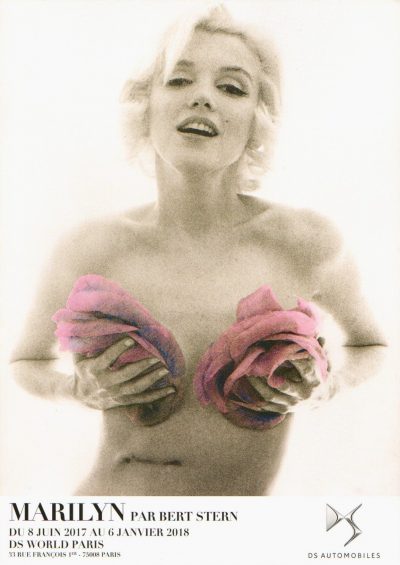 Bert Stern’s ‘avant garde’ 1962 photo shoot with Marilyn is featured in a new exhibition at the DS World car showroom in Paris. (The photo above shows Marilyn’s scar after gallbladder surgery.)

The session took place in Hotel Bel Air in Los Angeles in 1962 over two days and one night, consisting of three long photo shoots by Bert Stern for Vogue magazine. The photographer took a total 2,571 pictures; the 59 most emblematic are on show at DS World Paris.

For Julien Faux, Director of DS World Paris, the exhibition is ‘a way of keeping alive the legend of this extraordinary woman, who was ahead of her time. It is also a perfect opportunity for drawing parallels between the timelessness of this artist, who has since become an icon, with the spirit of avant-garde of the current models in the DS collection, descended directly from the DS, another icon of the 20th century.’

The exhibition is showing at DS World Paris at 33 rue François 1 in Paris. Free admission.”

One of the last survivors of Hollywood’s golden age, Robert Wagner has written about Marilyn in his memoir, You Must Remember This, as well as providing the introduction to David Wills’ Marilyn – In the Flash. In his latest book, I Loved Her in the Movies: Memories of Hollywood’s Legendary Actresses, Wagner writes about her again, and an excerpt is published on the Town and Country website.

“I have no horror stories to tell. I thought she was a terrific woman and I liked her very much. When I knew her, she was a warm, fun girl. She was obviously nervous about the test we did together, but so was I. In any case, her nervousness didn’t disable her in any way; she performed in a thoroughly professional manner. She behaved the same way in Let’s Make It Legal, the film we later made—nervous, but eager and up to the task.

Years later, Marilyn began dropping by the house where Natalie [Wood] and I lived. Our connection was through Pat Newcomb, her publicist. I had known Pat since our childhood. She had also worked for me and often accompanied Marilyn to our house. I bought a car from Marilyn—a black Cadillac with black leather interior.

Marilyn had an innately luminous quality that she was quite conscious of—she could turn it on or off at will. The problem was that she didn’t really believe that it was enough. My second wife, Marion [Marshall] knew her quite well; she and Marilyn had modeled together for several years, and were signed by Fox at the same time, where they were known as ‘The Two M’s.’ Marion told stories about how the leading cover girls of that time would show up to audition for modeling jobs. If Marilyn came in to audition, they would all look at each other and shrug. Marilyn was going to get the job, and they all knew it. She had that much connection to the camera.

When Marilyn died, Pat Newcomb was utterly devastated; Marilyn had been like a sister to her, a very close sister, and she took her death as a personal failure. Marilyn’s death has to be considered one of show business’s great tragedies. That sweet, nervous girl I knew when we were both starting out became a legend who has transcended the passing of time, transcended her own premature death.”